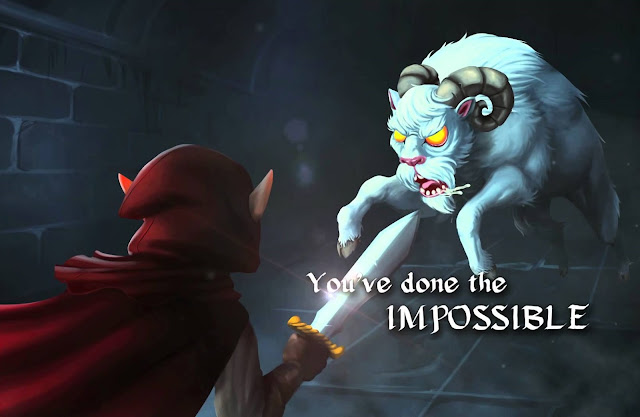 Desktop Dungeons is brilliant. It is so incredibly simple, and so incredibly basic, and yet it is brilliant. Brilliance. Genius. It’s going to be one of the finest games you could ever play on your iPad, and sadly it’s going to be completely overlooked because it’s also being sold for a little over $10, and on the iPad you might as well be asking for a billion dollars. Dr. Evil face and all.

It’s worth every cent of that up-front investment, though, because it’s a massive, sprawling, challenging, and charming game all in one package. Sitting halfway between a roguelike and board game, the basic idea is that you’ll take a hero character (from any of a multitude of classes and races), and enter them into a single level, single screen dungeon, where they’ll need to explore around in a turn based manner, collect treasure, and level up as much as possible before taking on a boss character that is hidden somewhere in that single level, single screen space. Defeat it, and they escape with the loot, which can then be used to level up the player’s growing city (giving players access to a wider range of heroes and character boosters in doing so). Fail, and the player earns nothing from that venture, and the dungeon remains open for another attempt later.

Because each dungeon is a single level, single screen game, the play loop of Desktop Dungeons is fast and furious. I can’t remember a time I spent more than 20 minutes on a map, and most of them are done in under 10. Whether I succeed or fail I don’t feel like I’ve wasted a lot of time, or become bogged down in the game’s systems, and as a result time has flown by and my hub city has grown almost without me really being aware of the fact. It’s a modern roguelike done well, and like other such examples (Rogue Legacy and FTL comes to mind) Desktop Dungeons is an example of a indie developer that has such an intense understanding of the form of their game, any why people might enjoy playing it, that they have truly elevated the genre and created for themselves a masterpiece of design. 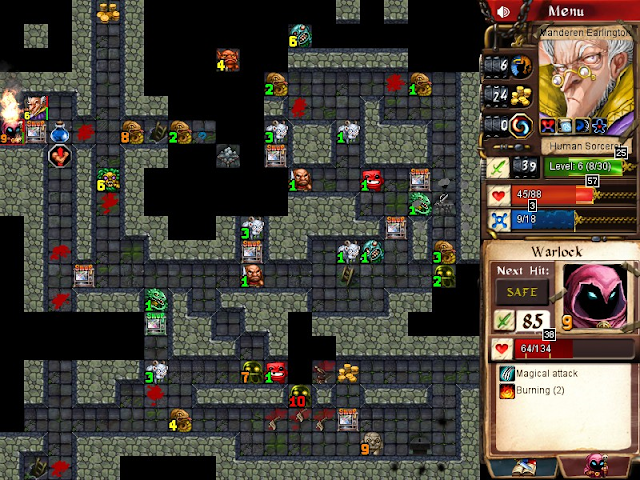 But despite the speed and efficiency of the game, it’s not easy. Not even close. Desktop Dungeons revels in the roguelike’s heritage in difficulty, and is perfectly content with utterly annihilating your character if you make some silly decisions. In each dungeon your hero starts out at level one, and with no equipment (unless you spend valuable gold before a dungeon delve buying starting equipment for the character). He (or she) will need to hunt out similarly weak enemies to kill them and level up, before taking on the more difficult monsters he/she’ll encounter along the way. The good news is that enemies don’t move, and won’t fight unless directly attacked. The bad news is that to have any hope of defeating the boss, every single experience point on offer needs to be obtained, and that means figuring out how to keep levelling to the point where every single enemy can be defeated.

Compounding the problem further is the fact that both health and music power are precious resources. As with every other RPG, characters will lose health and magic points as they’re attacked in combat or cast spells, respectively. Unlike most RPGs, the only way to recover health is to uncover new parts of the map (or use incredibly rare and precious potions).

But because each dungeon is only a single map, undiscovered area is, in fact, a precious resource of its own. So often you’ll be faced with a number of difficult enemies around the map, knowing that there might be come easier kills and experience resources hidden by the dark cloud around you, but you’ll find yourself weighing whether you want to use up some of that precious resource in order to try and find an easier opponent to take down (and perhaps level up from). 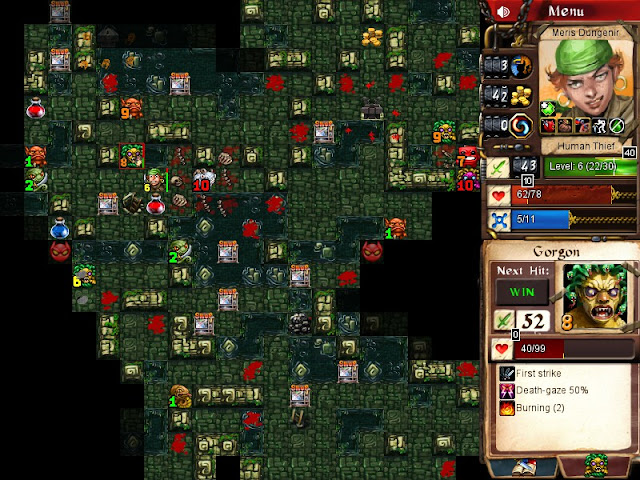 So, even through each map in Desktop Dungeons is over quickly, it’s also the kind of game that will make you weigh, balance, and consider every step and action you take within it. The difference between victory and defeat could be as simple as wasting a potion or taking on the wrong enemy, and that means the sense of satisfaction that comes with defeating a map is that much more satisfying. As with games like Dark Souls or Monster Hunter, defeat in Desktop Dungeons is an opportunity for learning, and progress through the game relies on you becoming better at it, as much as it does building up your city so you can provide your heroes with massive bonuses when they venture into a dungeon.

In terms of aesthetics, Desktop Dungeons is simple. Characters and monsters look more like simple pictures drawn on pieces of cardboard, which suits the board game aesthetic perfectly, and while it is a simple effect, it’s undeniably charming and truly entertaining to bump into a new monster or boss character. The soundtrack deserves a special mention in setting the scene, coming from the people behind the likes of Super Meat Boy and Banjo Kazooie, and is truly something that will get you into the spirit of the game.