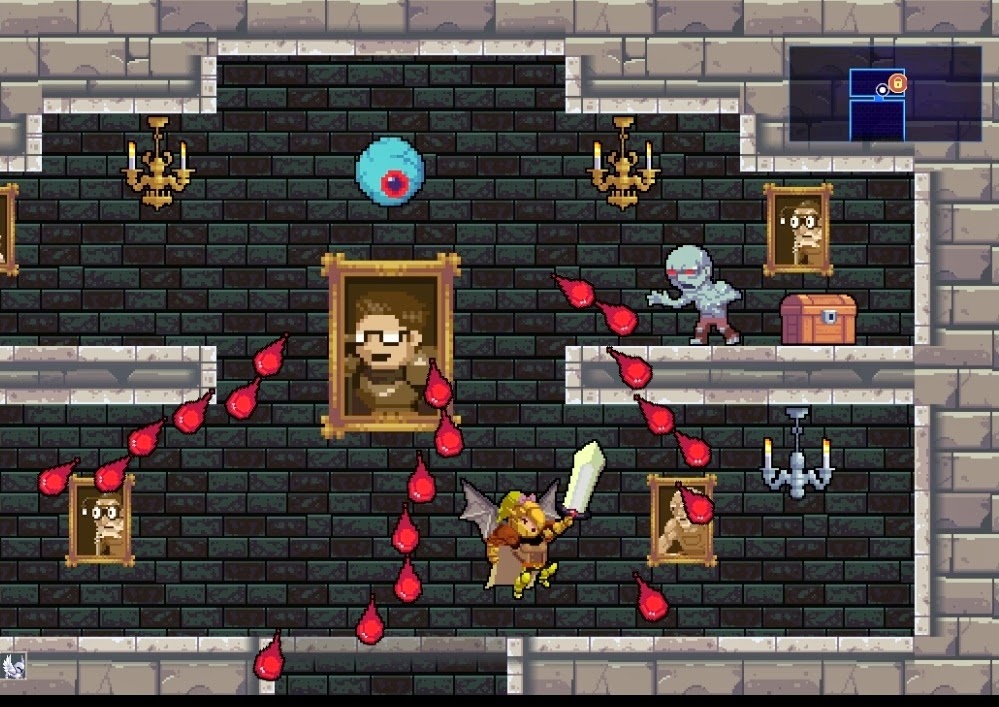 Now with most roguelikes, when a character dies it’s simply back to the start of the game. You’ll roll up a new character and start from scratch. But Rogue Legacy does something different; it makes a feature of this death-and-rebirth structure.

In what must be the most unlucky lineage since the Belmonts, the heroes of Rogue Legacy are a family line doomed to send generation after generation of heroes the randomised halls of hell. Each time a hero dies, players will be  able to select from one of three of their descendants, who will be the next one to try their hand at the gauntlet. 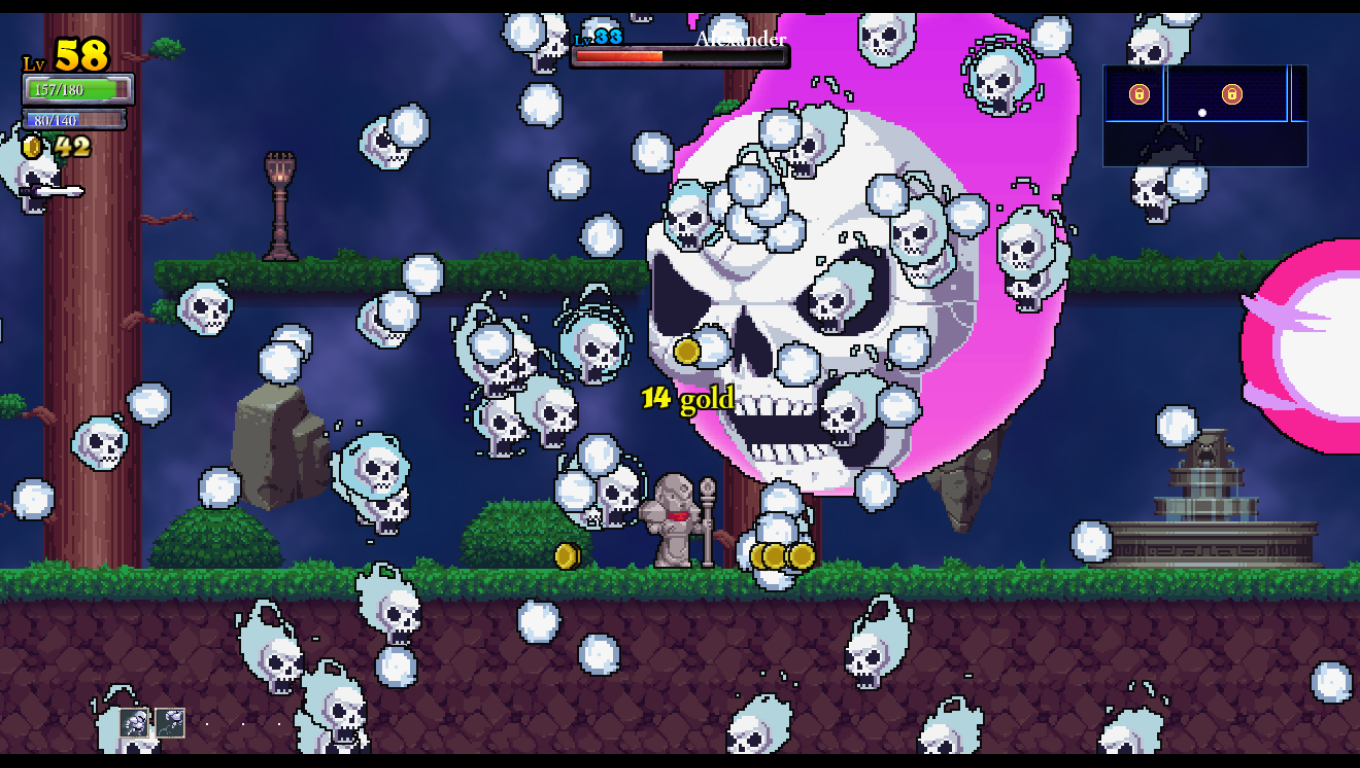 Far from being cookie-cutter fighters, however, each of these descendants have their own unique quirks. One might be colourblind, for instance, and playing as that character will turn the game into a Game Boy-style monochrome series of environments. Another one might be ADHD, which means they run around at a speed 30 per cent faster than normal. And my favourite would have to be the clumsy fellows that break everything they run into, which is great for a carnival mini-game where a player only has a few axes to throw and needs to smash a bunch of targets. Save the axes and simply charge on through ’em, I say.

While Rogue Legacy doesn’t have all that much plot, the personalities of the various characters more than compensates. It wasn’t long before I felt very much invested in the adventure, and when I did have a character I liked (such as Sir Trips-A-Lot) I felt very sad indeed when he tripped one too many times and got done in by something embarrassing like a bat.

Rogue Legacy likes to be difficult too, even by roguelike standards. Rooms and environments are highly randomised, and there are a lot of different kinds of rooms to deal with. Despite the random nature of them, the rooms always leave the impression that they were deliberately constructed, with enemy attack patterns that become borderline bullet-hell at times. Navigating through these rooms requires nothing short of precision platforming skills. 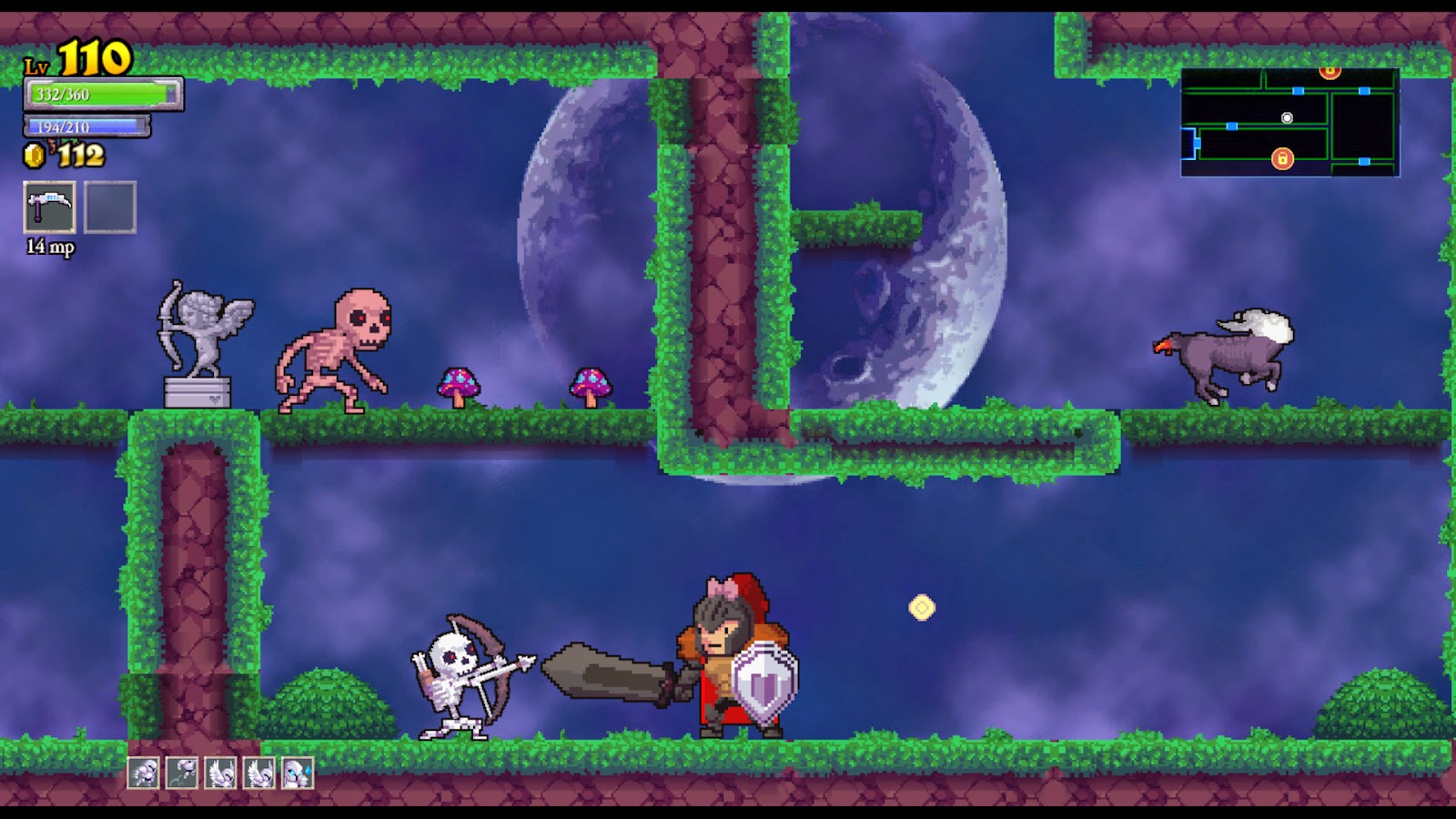 In fact, Rogue Legacy so resembles a platformer that after a while I started to see this more as a spiritual successor to one of the early Castlevania games than some kind of genuine attempt to emulate the RPG-style progression of a roguelike. Technically it’s possible to get right though the game on the first play through because sheer brilliance in skill can compensate for being “underlevelled.” Of course, you’re not going to be able to achieve such a feat unless you’re some kind of savant, but that does show where the game’s priorities lie.

Boss battles are also incredibly challenging. They have a lot of health and fill the screen. Knowing that I was coming up against a boss was always the source of some trepidation because I just knew that I was about to be involved in something that was severely going to test me, if not send me back to the start of the game. I was less concerned with bumping into one of the Souls bosses, as a point of comparison.

It’s worth noting that a character’s death doesn’t reset progress completely in the game. Upon restarting, the new player character is able to use the treasure looted from the previous hero’s adventure to “level up” a home castle, which looks very much like an RPG-style upgrade tree as is the closest the game does come to behaving like an RPG. These upgrades add skills to the hero and gives them more health and magic power. Any leftover cash can be spent on equipment upgrades. The loose change needs to be handed in to a reaper-thing before entering the dungeon again, meaning that each character starts off with no loot and makes it impossible to save “income,” but it makes for an interesting approach to upgrades, and allows players to feel like they’re making some kind of progress, even as their heroes die over and over again. 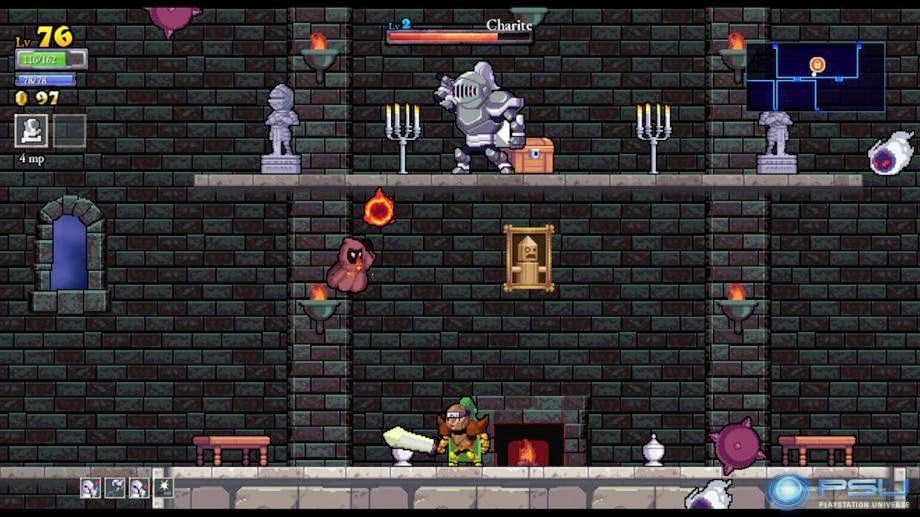 Backed by that retro, pixelated aesthetic that all indies seem to be in love with at the moment, Rogue Legacy is a pretty game, with plenty of silly animation and monster design to help scratch the nostalgia itch. The music works to much the same effect. Technically a single play through of the game wouldn’t take too long, and so the retro aesthetic does fit the theme – like the arcade games of old there’s an artificial sense to the difficulty in order to pad out how long it will take to complete, so that you don’t feel like you’ve wasted money on something that’s “too short.”

What I find most fascinating is in comparing this game to another recently-released 2D platformer/ roguelike, Abyss Odyssey. Rogue Legacy undeniably plays better, with tighter controls and faster action. It’s more challenging and skill-based too thanks to the sheer speed and flow of movement. But Abyss Odyssey does win the little comparison battle for my mind because it offers something unique, whereas Rogue Legacy relies too heavily on its retro nostalgia for its own good. Abyss Odyssey is also more mature and confident in that it knows it doesn’t need to be artificially difficult in order to give players a worthwhile experience.

Mind you, apparent lack of confidence aside, Rogue Legacy is still an essential game, and it’s good to see the roguelike still getting so much traction, because it is a wonderful, versatile and ultimately entertaining RPG sub-genre.

The Friday 10: Ten quotes from my favourite female characters of my youth