When I reviewed last year’s official F1 game on the iPad, F1 2010, I had one big criticism; there was no one to race against. It was a time-trial only affair, and as such playing it felt very much like a watered-down iPad cash in.

F1 2011 has fixed that. There are races to compete in this time. It’s still by no means the perfect iPad game, but there’s progress there. Give it another year or two and we should have another top flight racing franchise represented on the Apple devices.

The main problem with this year’s installment is how limited the racing mode is. Yes, there is the full range of tracks and racers from last year’s F1 season, and yes, it’s quite possible to do the full length (72 laps or thereabouts) race. But there’s so season mode, and no simulation options running behind the scenes to allow you to tweak your perfect car. It’s straight out racing, one race at a time. 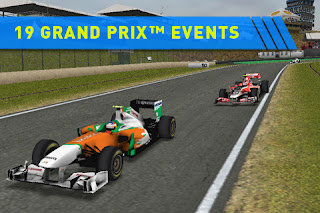 Because there is no season mode, getting a win doesn’t feel as fulfilling as there is no real context to the action.

It doesn’t help that the other racer AI isn’t all that special. Basically, the other cars follow a predetermined path, and show very little “intelligence” about it. The multiple difficulty levels allow you to test your skills about faster enemies, but experienced fans of F1 racing will have a field day with overtaking in this title.

That is, once they’ve got the steering comfortable. There’s four different control options (one using gyro controls, and then the other three using various combinations of virtual buttons), but even after extensive tweaking, none of those control systems feels comfortable for the first solid hour of play time. With perseverance you’ll find something that allows you to get through the races with very zippy times, but it would have been nice to see more development time go into coming up with intuitive control systems. 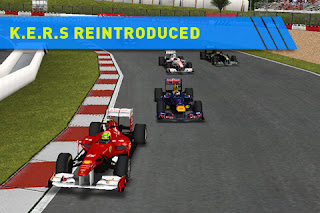 Criticisms aside, this is a whole lot of fun at a tiny asking price. The game looks good and has a really great sensation of speed. The sounds are authentic, the tracks have been lovingly constructed, and there’s even a workable pit stop minigame to recreate those tense moments in the real sport.

Time trial also returns, and it’s a compelling one, with full Game Center integration to facilitate those competitive urges.

So with F1 2011, we’re getting there. It’s a good game, and F1 fans will appreciate that their sport has finally hit the iPad in a serious way. That said, the mainstream appeal will likely have to wait for the 2012 edition.