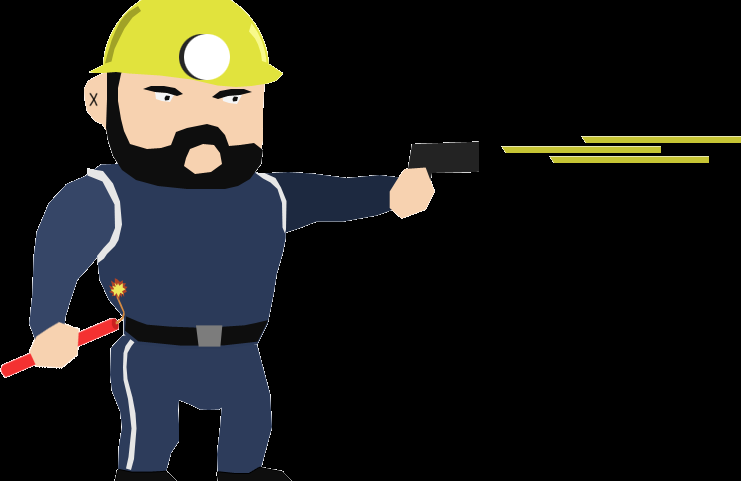 About an hour into my time with Quarries of Scred, I decided to look at the game’s stats page and see what my progress has been like. To my surprise, sixty minutes into the game I had made one hundred attempts into the game’s randomly generated mines. Published by Surprise Attack Games, Quarries of Scred is a retro styled arcade title featuring permadeath, and my average life length had been forty seconds.

Featuring bright mono-colour sprites and a chiptune soundtrack, this game almost looks like it belongs on the Commodore 64. Back when fancy graphics, long storylines and smooth sprite scrolling were wistful dreams for the future, games had to make do with the most basic of tools to engross the player. Quarries of Scred does this with rock solid gameplay and an incredibly fast feedback loop, leading you to sink hours into it without noticing.

The gameplay is simple and reminiscent of other mining titles such as Steamworld Dig, or the classic Bolder Dash. You are placed into the shoes of Bob, a terrible person forced to mine for punishment. Starting from a surface level, you use the arrow keys to dig downwards in search of gems to bring back up and cash in for credits. Impeding your path are boulders which slide and fall when not supported by solid ground, and a boulder landing on your head naturally spells certain death. The game is simple enough that two screens can teach you all you need to know, but in true retro fashion there are also many mechanics which are left for you to figure out – such as enemies which kill you on contact or mushrooms that threaten to spread to the entire mine network. The archaic approach to design may be a barrier of entry to some, but it doesn’t take a lot of imagination to appreciate the tone evoked by the fast paced and unforgiving gameplay. 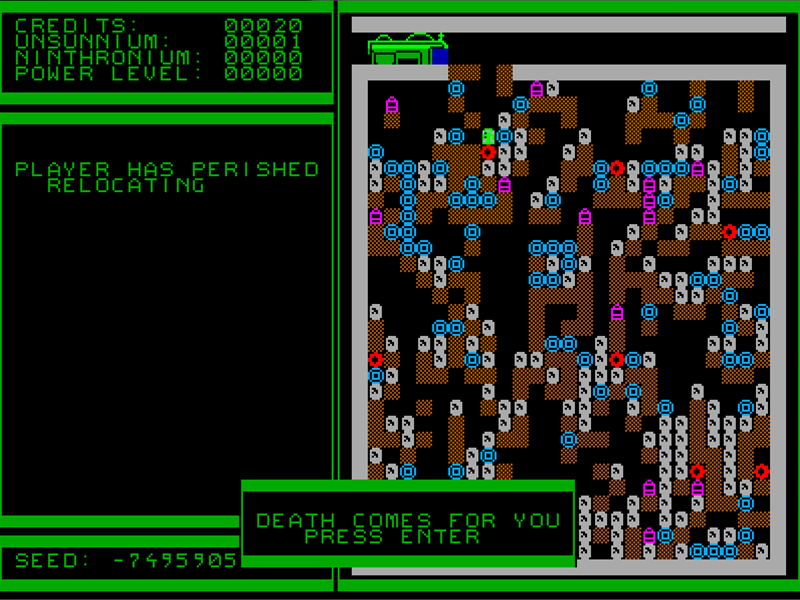 To help you navigate the quarries, Bob has access to landmines and lasers, although both need to be purchased with your hard earned money. Both items allow you to clear threats away so you can dig a little deeper, although neither are necessary to finish the game. The goal is to amass 7500 credits to purchase a teleporter pass and leave the mines, thus ending your current session. The teleporter pass seems expensive at first, but it is not an unachievable task. And of course, winning is nice, but we all know the real goal here is to win big.

The main game is created using a seed system, ensuring that virtually no two games are alike. There are also side modes which influence how you play, such as the time attack mode and a darkness mode which requires you to place flares to see your surroundings. There is almost zero randomness and every death is due to the player’s poor judgement – in fact the game’s mechanics seem designed specifically to punish greed and reward careful planning.

After playing for a few more hours, I managed to thin out my average game length to a more reasonable 90 seconds. The gameplay is fast paced and satisfying, and the short game length means you won’t get too attached to your player character. I would say that Quarries of Scred is built to promote short play sessions, but the sheer addictiveness means it’s hard to stop playing once you start and the sheer difficulty of the gameplay only adds to this. Surprise Attack Games have created an excellent example of a game which is simple yet elegant, and most of all incredibly enjoyable.