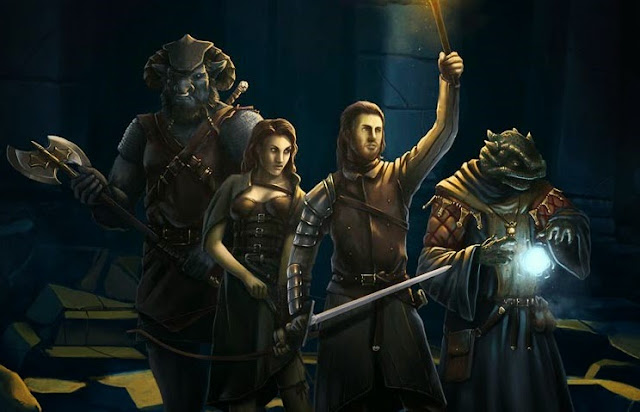 Legend of Grimrock was something of an indie revelation when it was released on the PC back in 2012. As an attempt to modernise the classic dungeon crawler, it retained the nostalgic rush that had people glued to their screens back when Might & Magic, Wizardry, and SSI’s Dungeons & Dragons games were king. At the same time it offered a clean, modern interface and an art style that was gorgeous to look at.

Related reading: You can also check out our review of the sequel on PC here.

It was also an unmitigated commercial success that saw the release of a much expanded sequel last year. And now it looks like the developer is looking beyond the PC, because Legend of Grimrock has been ported to the Apple iPad, and immediately it’s one of the best games available on the platform.

As with the most classic of dungeon crawlers, such as Eye of the Beholder, Legend of Grimrock is a singularly focused experience. A thin cut scene introduces the narrative premise (the characters are a group of criminals that have been dumped in a dungeon with the promise that if they escape they are free) and from that point you’re left to figure out how to do that. 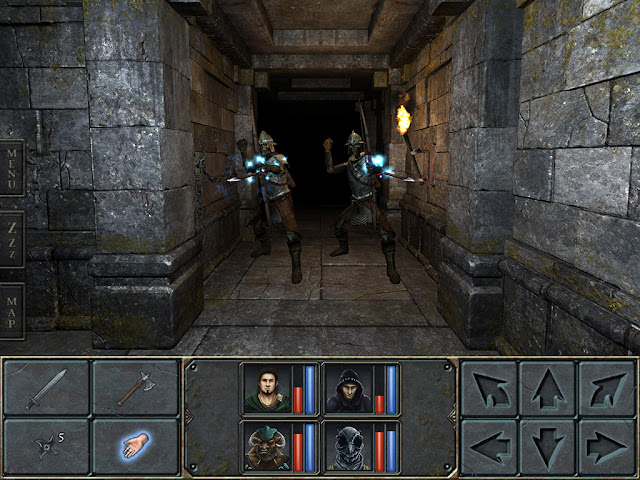 The dungeon itself is dripping dank and dark, where artificial (or magical) lighting is necessary to even see what’s around. It can be claustrophobic at times, with even the largest of rooms navigable with just a couple of steps, and otherwise presenting the player with corridor after corridor that builds into intricate, complex labyrinths.
It’s just as well that the visual aesthetic is of a high standard, because the palette is limited, and if it wasn’t so pleasing on the eyes, it would become a too repetitive experience too quickly. Not that you’ll notice the environments for the most part, as you’ll be too focused on the potential monsters and dangers around you, but every so often the game demands that you search every square inch of the environment to find a tiny button camouflaged into the wall (or similar “puzzle”) to open the path forward, and these needle-in-a-haystack “puzzles” are the closest the game comes to a flaw. They fit in with the old school approach to dungeon design, but also seem to be an artificial way to extend the length (and challenge) of what would otherwise be a simple and straightforward game.

Aside from those rare moments that you’ll be hunting for a button to press, though, Legend of Grimrock has an unparalleled sense of atmosphere, which lends the gameplay an intensity that turns its otherwise sedate pace into a tense battle for survival. It’s a game best played on a high difficulty level, because the more difficult the enemy, the more you’ll tense up when you hear its screeching echoing down the halls. Rounding a corner can expose you to some nasty shocks with powerful monsters, but there’s often some kind of warning that those who are paying attention can use to prepare for future encounters. 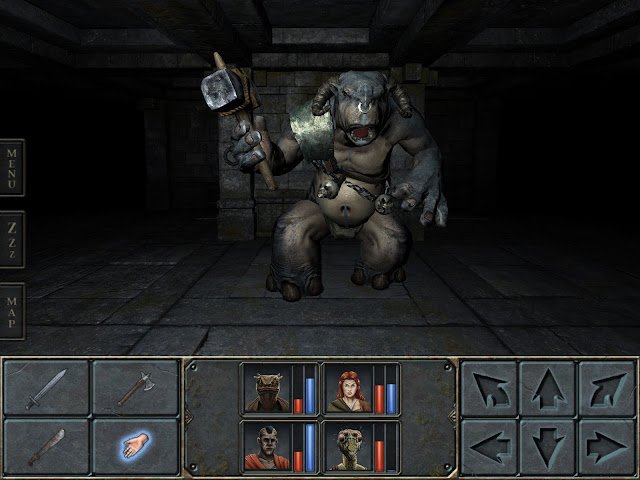 Combat itself is essentially turn based, but based on timers – i.e when a character executes an attack, they need to wait a couple of seconds before being able to have another swing at the enemy. The range of character classes is not extensive, being simple archetypes (warrior, rogue, wizard), but each character has a wide range of different skills that they can learn by levelling up, and that ultimately gives players a lot of control over building a balanced and varied team.

But at first newcomers to the dungeon crawler genre might find everything too limited for its own good. Unlike the bigger budget RPGs or JRPGs, the combat of Legend of Grimrock is almost subtle, with limited animation and fireworks to give players the impression that they’re in command of powerful heroes. That fits in with the survival narrative, but the lack of flash makes for a cerebral experience that genre newcomers might interpret to be boring – especially when for the first couple of dungeons, each character won’t have much more at their disposal than one weak magic spell, or a rusted old weapon they found discarded in a corner.

Deeper into the dungeon characters will have better equipment and a greater range of magic, and the combat becomes a more strategic affair. It’s never quite as deep as a Japanese dungeon crawler like Persona Q or Etrian Odyssey, but there’s enough there to support a wide range of combat and trap scenarios. I’m not sure just how much of my love of Legend of Grimrock is because of a sense of nostalgia, or a consequence of great level design. The game offers intricate maps and some classic crawler action, and it’s as good a second time through as it was the first. Having this game on my iPad for play on the go is this retro ‘crawler fan’s dream.

Do you play Chain Chronicle? Win a content pack here!