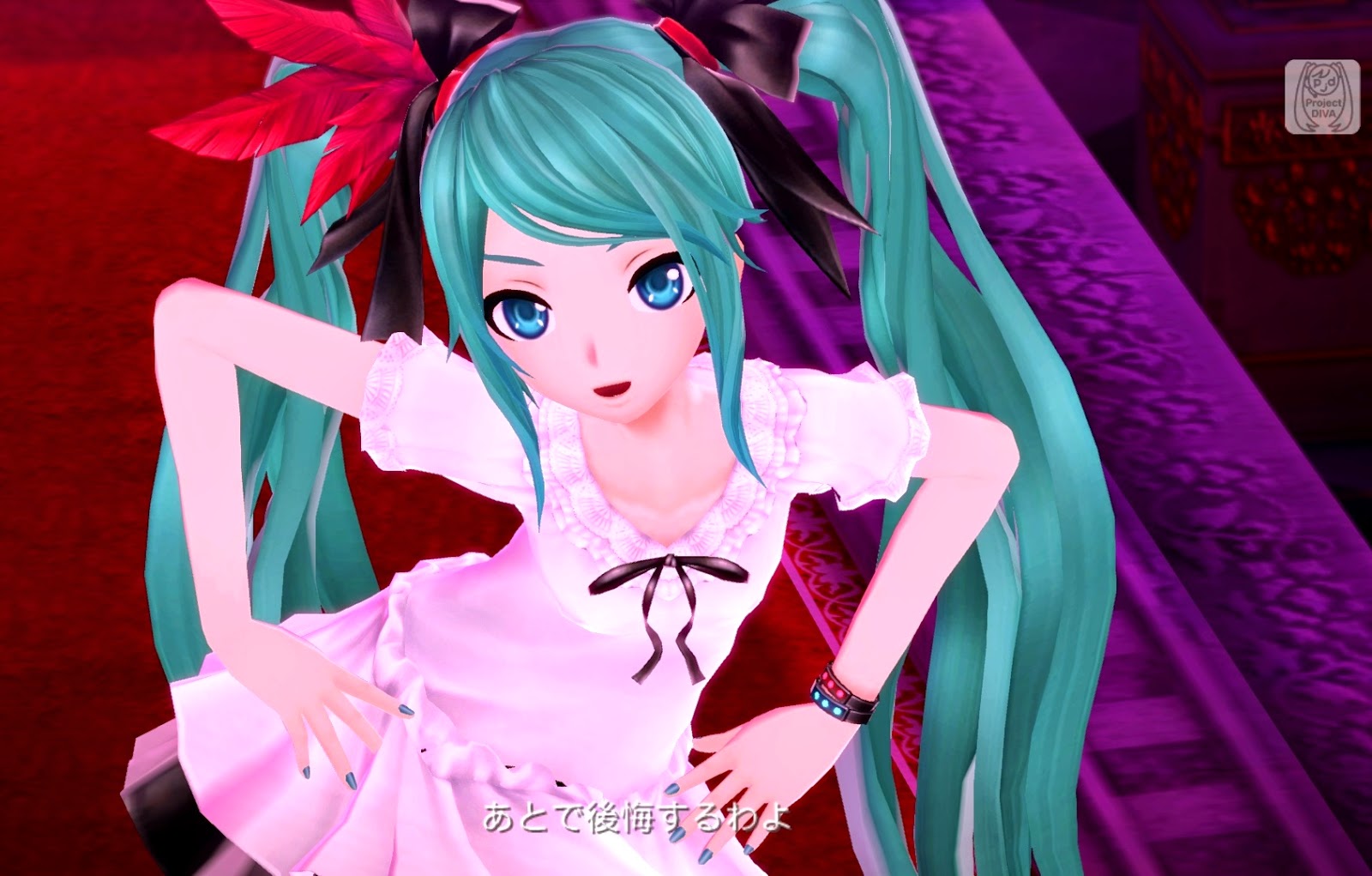 As everyone knows, I’m a big fan of the Hatsune Miku: Project Diva games. Actually, “big fan” is probably an understatement; having spent something like 700 hours in play time across the two of them, I’m probably in need of an intervention.

That aside, I’m surprised I haven’t done this Friday Ten yet, but here’s a countdown of my favourite ten music tracks and video clips from the two games. I’ve picked five from each, and it was a tough list, because I (obviously) like so many more tracks than these, but these would have to be the ones I’ve played the most.

No doubt all the Miku fans out there have their own favourites, so please do let me know your own picks in the comments below. Or even your favourite songs that are not yet in the Miku games.

Or just chat about Miku in general. I’m always up for a good chat about the vocaloids.

And without further ado:

This was probably the first Miku song I became truly addicted to. Having started playing Project Diva F on the Vita to review without knowing anything about Hatsune Miku beforehand, this was one of the first tracks I played, and from that point on I was hooked. The music track itself is complex and has a deeper, darker tone than many of the other vocaloid bubblegum pop tracks, and the video clip has a sexy edge to show a different side from the happy-go-lucky Miku character we generally see.

Nostalogic is a rocking dance track, with a strong, fast party beat and simple, pleasant tune sitting over the top. The video clip is ace, too, with whoever put it together having a good understanding of dance. A lot of the moves performed by MEIKO in this track (or whatever vocaloid you have replaced her with in the track – stick Kaito in there for a laugh), are based on real Cha Cha figures, giving the track an authentic vibe that helps to boost its value as a dance track in a rhythm game.

Remote Control is sheer entertainment. It’s addictive to the most insane degree, being light, bouncy and catchy, and for a song that is filled with mischief and youthfulness, the video clip starring Rin and Len fits perfectly. An abundance of colour and silly dance moves complement and enhance an cheerfully irrelevant tune. It’s a little hard to play this track, because the energy going on in the background is often distracting, but it’s a track I can play over and over again without becoming tired of it.

Kaito can be a pretty serious fellow in his music, which means his tracks are often a perfect way to balance out the brightness of the rest of the tracks. Ashes to Ashes is a perfect example of this, with a dark, serious tone aiming to give players something a little more opera, a little less dancey. But that’s not to suggest it’s a bad track, because it’s quite the opposite: Ashes to Ashes has a strong spirit, and that makes it hard to put down.

The video clip of World’s End Dance Hall is truly entertaining stuff, as Miku and Luka face off in a dance battle for the idol with the best moves in a Chinese setting. But the music track itself is great as well, with a rockier edge and fast pace combining with some more traditional elements of Asian music to create the theme that the video clip feeds off.

I’ll Miku Miku You [For Reals]

This is one of the shortest tracks across all Project Diva games, coming in at under two minutes of length. But, given that this is essentially a novelty track, that length is just right. With nonsense (but hugely entertaining) lyrics, I’ll Miku Miku You is pure bounce, and let’s face it, it’s the kind of song that fans of vocaloids generally like. The video clip is also hugely energetic and presented just like you’d expect to see if you headed along to a Miku concert.

Close and Open, Demons and the Dead

This is one of the more odd Miku tracks in Project Diva, but it really works, both as a song and for the game itself. It has a really catchy, bassy beat to it, which makes it a good choice for a rhythm game, and the developer took full advantage of that by timing button presses to that beat. But the unique melody and theme also help to broaden the range of music in the game. And the video clip itself is incredibly slick and charming.

This track is only available as DLC for the second Project Diva game, and it’s easily the best couple of dollars I’ve spent. In this track, MEIKO goes modern disco, with a slick piece that would feel right at home in any nightclub in any city. A sultry tune is joined by some sultry dance moves, as suits the genre, and as such this is also one of the more mature tracks available across the two games. Luka and MEIKO music tracks are generally the place to go for more Madonna-style pop music than the happy-go-lucky stuff… it’s a pity there are relatively few tracks from either in the games.

This almost-ballad track is incredibly appealing, precisely because it is a rich composition that shows a deft eye for detail and lyrics that are up there with the best that the pop industry in general produces. But it’s really the theming of this track that appeals to me the most. The references to Romeo & Juliet and Cinderella give the track a classic fairy tale theme, which is reflected in one of the most gorgeous video clips across all Project Diva games.

This is the Happiness and Peace of Mind Committee

Last, but certainly not least, is this one. It starts off with what you might have thought would be a slow paced ballad, but that’s a bait-and-switch. This is the Happiness and Peace of Mind Committee is a pop rock track, with the kind of “made for live concerts” vibe that gives is a strong energy and powerful rhythm. That being said, the reason I like this one so much is that video clip – I would love to be at this concert.

Star Hammer: The Vanguard Prophecy is one for strategy fans to watch out for