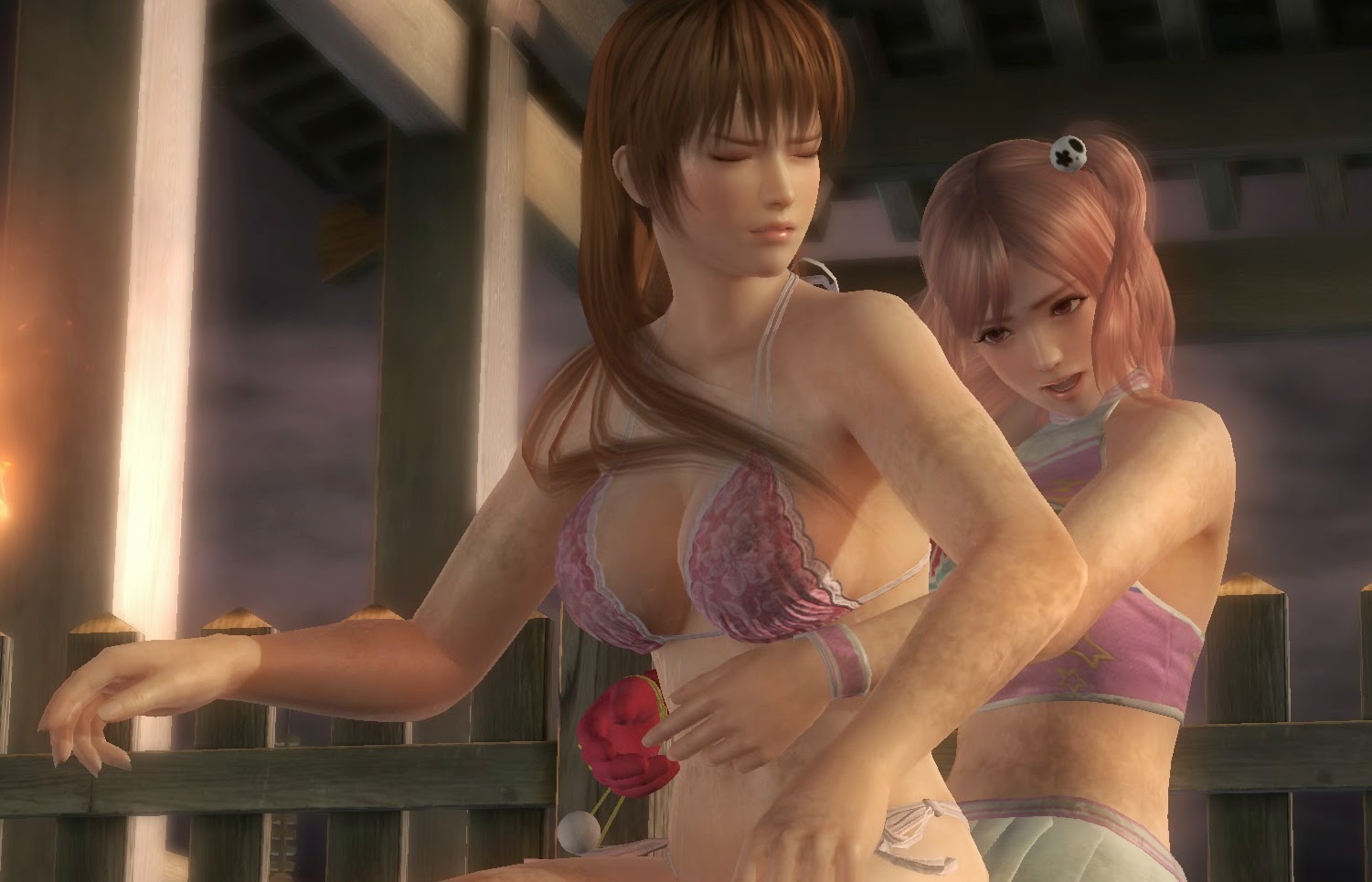 Mortal Kombat X has just released. It is really a very good game, as I highlighted in my review.

It’s also incredibly violent. Mortal Kombat X is as excessively violent as Dead or Alive 5: Last Round, released a few short months ago, is excessively sexualised. What I have found immediately fascinating – and knew would happen – is Mortal Kombat X is being celebrated for that violence, but Dead or Alive 5 was castigated over its bikinis and breasts.

There’s already dozens of reviews out there for Mortal Kombat X, and as I’ve been wading through them, one thing that has really stood out to me is that not once have I really seen “violence” being used in a pejorative sense. And by that I mean not once have I seen anyone criticise the game because it is violent. Critics have either lauded it for the violence, or ignored the violence as a non-issue, writing it up as something entertaining, satirical or even, as I did, meaningful. And so they should. Mortal Kombat is a violent game and uses that violence to the creative benefit of the game. It needs the violence to make the point it wants to make. It’s hard to criticise a game for executing on its vision, especially when it is so over the top and satirical about the violence that it’s difficult to see how anyone would argue that the game promotes or condones actual violence.

With me so far? Good. You’re like almost everyone. I’ve seen people get very upset about Warner Bros.’ DLC policies, and I’ve seen plenty of people tell me that the violence is so excessive that they’re not especially interested in the game, and that’s perfectly fine, as well. No one, however, has suggested that the game is unacceptable because of its violent content. 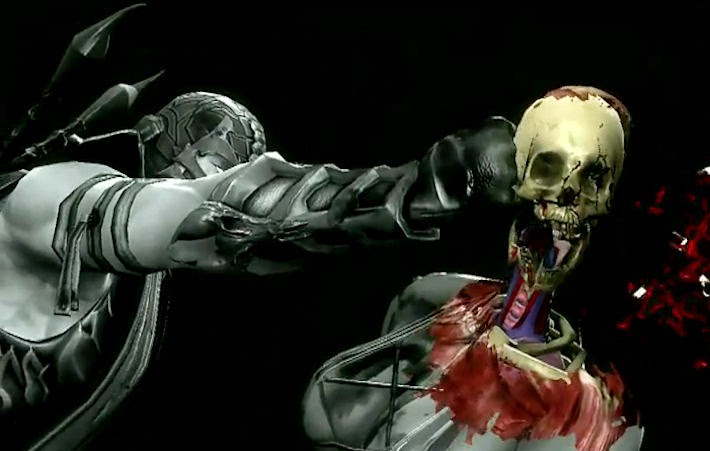 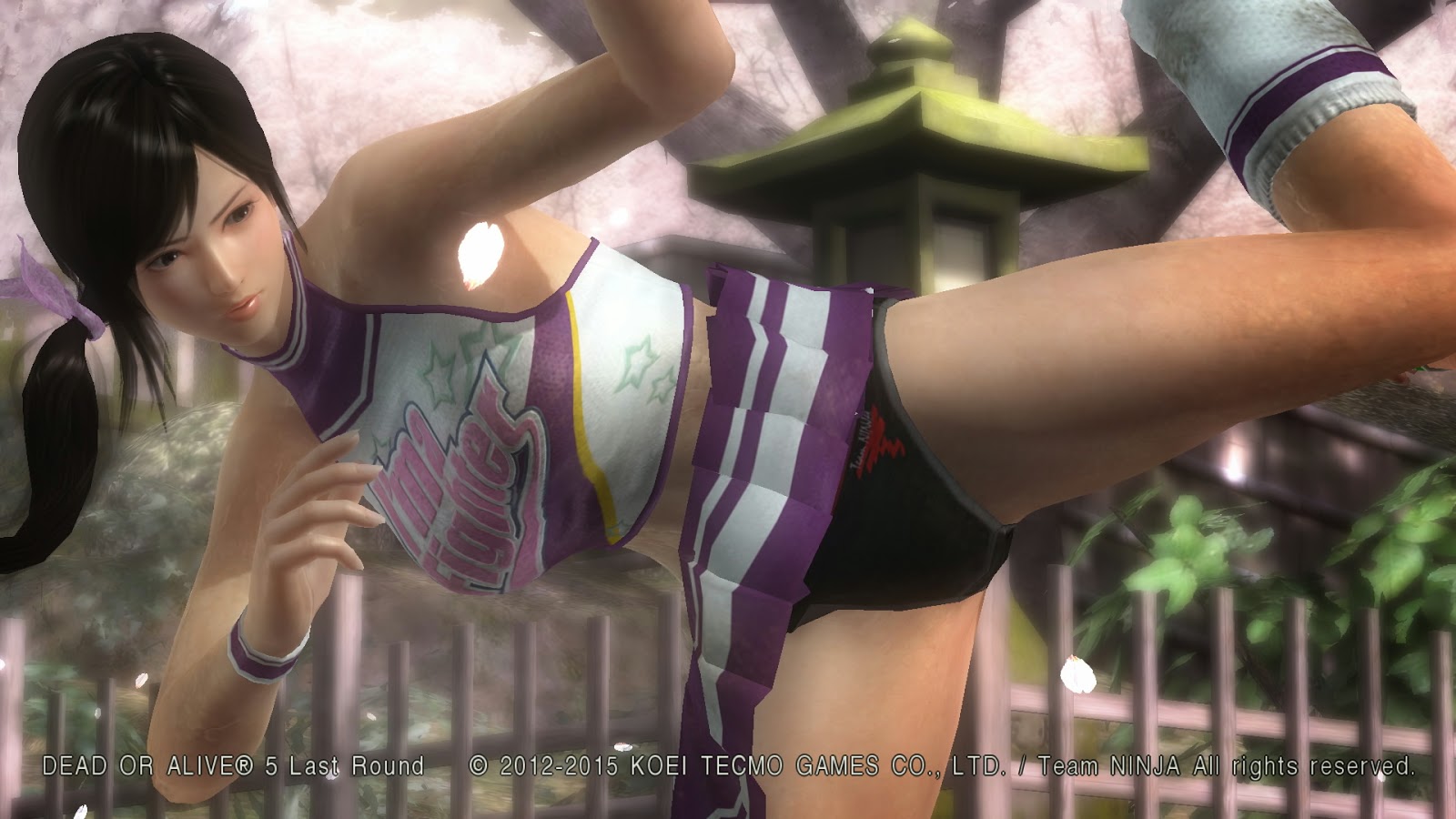 Boy is that a far cry from the criticism that gets levelled at Dead or Alive. I’m about to list a couple of examples below, but you can always jump on to Google and type in ‘Dead or Alive 5 Sexism,’ or words to that effect, and you’ll have plenty of reading that tries hard to back up that statement. I’ve rarely seen any real effort to delve into the game’s themes and properly analyse it, of course, and for the overwhelming majority of critics ‘sexy’ is a synonym for “sexism.” As such these arguments are invariably limited and flawed, but I’m not here to debate against them (today, anyway). What’s relevant here is the tone and context, which has led these critics to draw the conclusion that sexualisation is a pejorative.

Say what you will about Anita Sarkeesian and her crusade, but this is exactly what she is talking about in terms of sexism in gaming… such an unhealthy representation is not only detrimental to the people playing the game but it takes away from the game itself.

The tutorials are certainly more interesting and satisfying than the laughably awful story mode, which is utterly nonsensical and turns up the creepy sexism to almost unbearable levels. 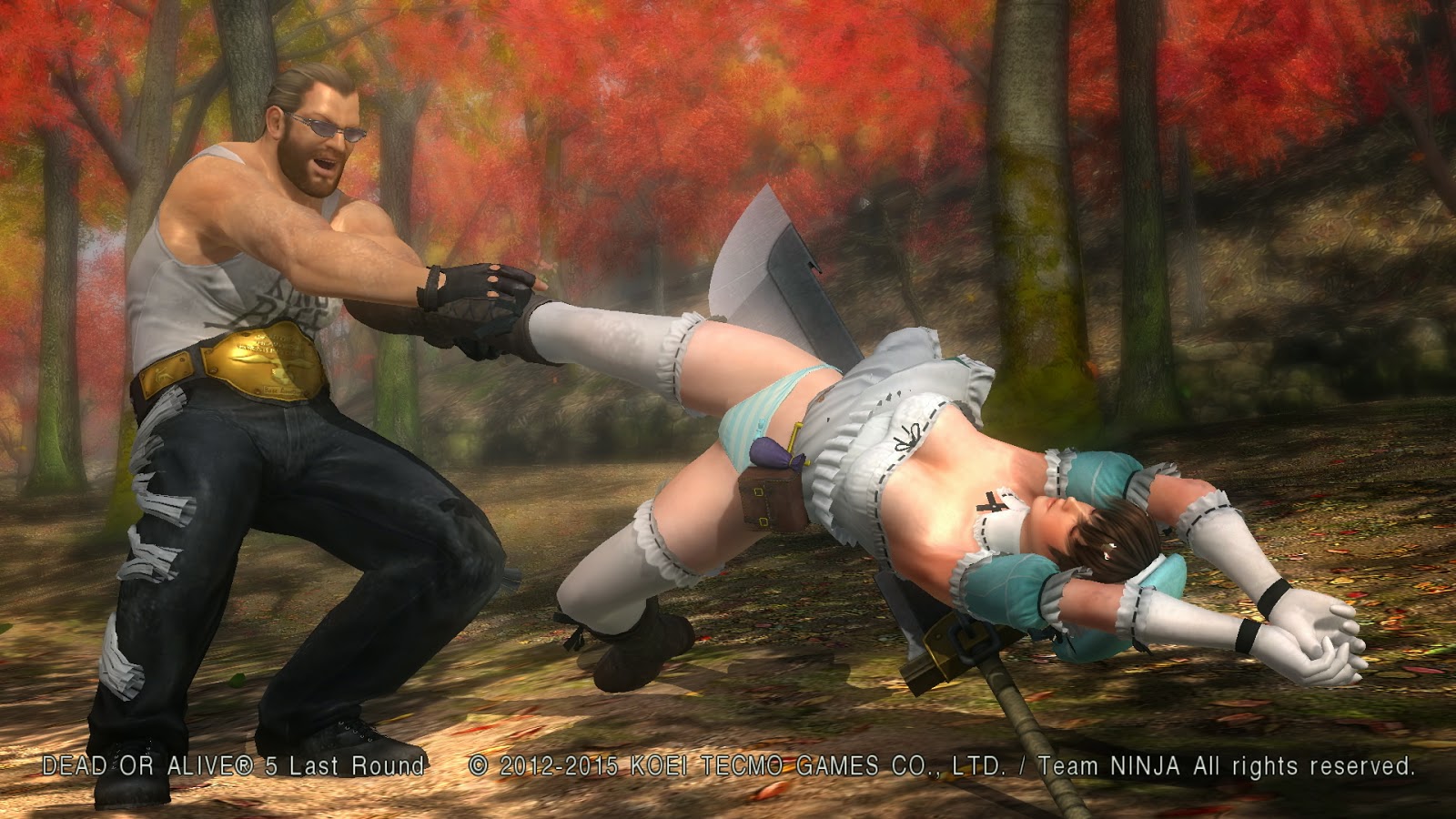 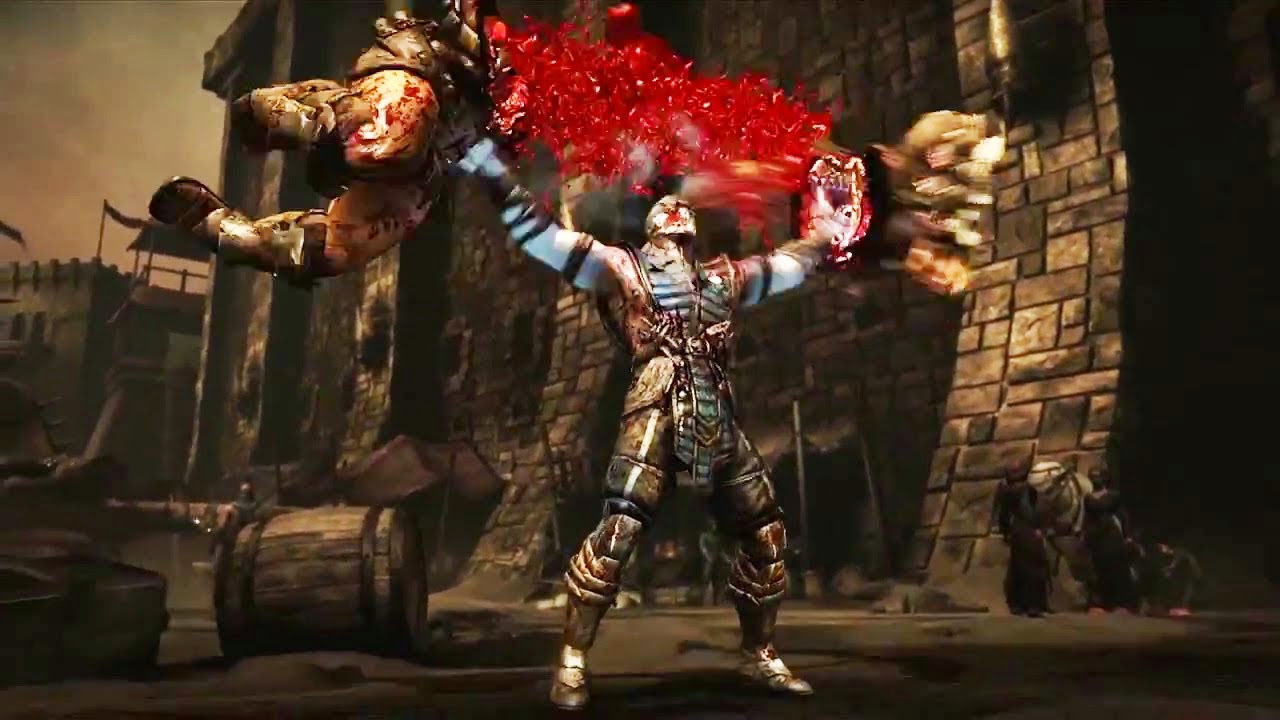 Well don’t worry oh severely disturbed one, if you buy the collectors edition version then not only do you get an awesome looking steel case but you also get all 6 bikini’s (sic).

It’s just a bit of a shame, especially given the accusations of inherent sexism levelled at the games industry these days, that DoA seems to wobble right into the critics’ hands.

I typically avoid games with any ‘sexist’ tone and box quotes like “enhanced graphics make the hottest fights in gaming even hotter” and a CD printed to make it appear to have moist was certainly cringe worthy. Although having played – and thoroughly enjoyed – what the game has offered, I’ve come close to having my opinion totally reversed. Dead or Alive 5: Last Round is a game that certainly knows its niche. It’s totally understands how people view and play the game. It knows exactly what it is, a guilty pleasure.

The last one, especially, is important because over and over again in reviews of the Dead or Alive games, even when they’re positive positive review, the critic is careful to point out that the game is good despite its sexuality. Dead or Alive might be a lot of fun, but its content is still a pejorative. Mortal Kombat is good because of its violence, or its violence doesn’t impact on the quality of the game. Dead or Alive, however, is either terrible because it’s sexist, or it’s good despite being sexist. 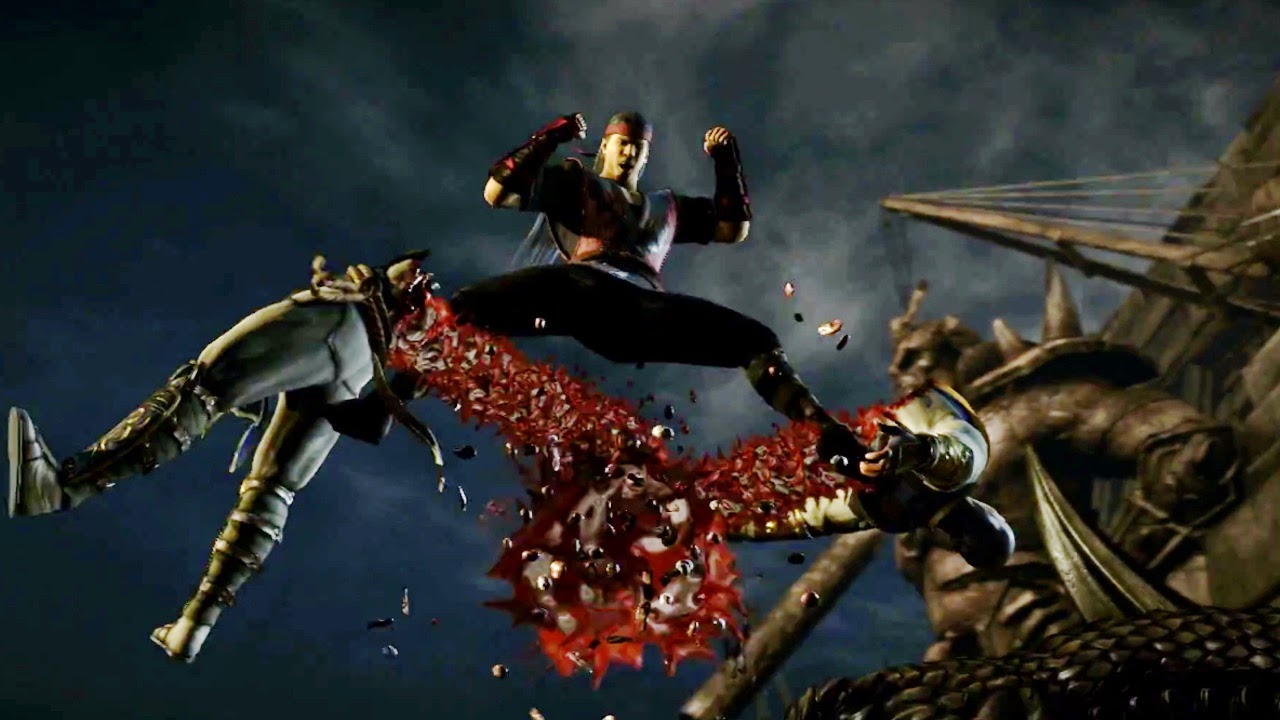 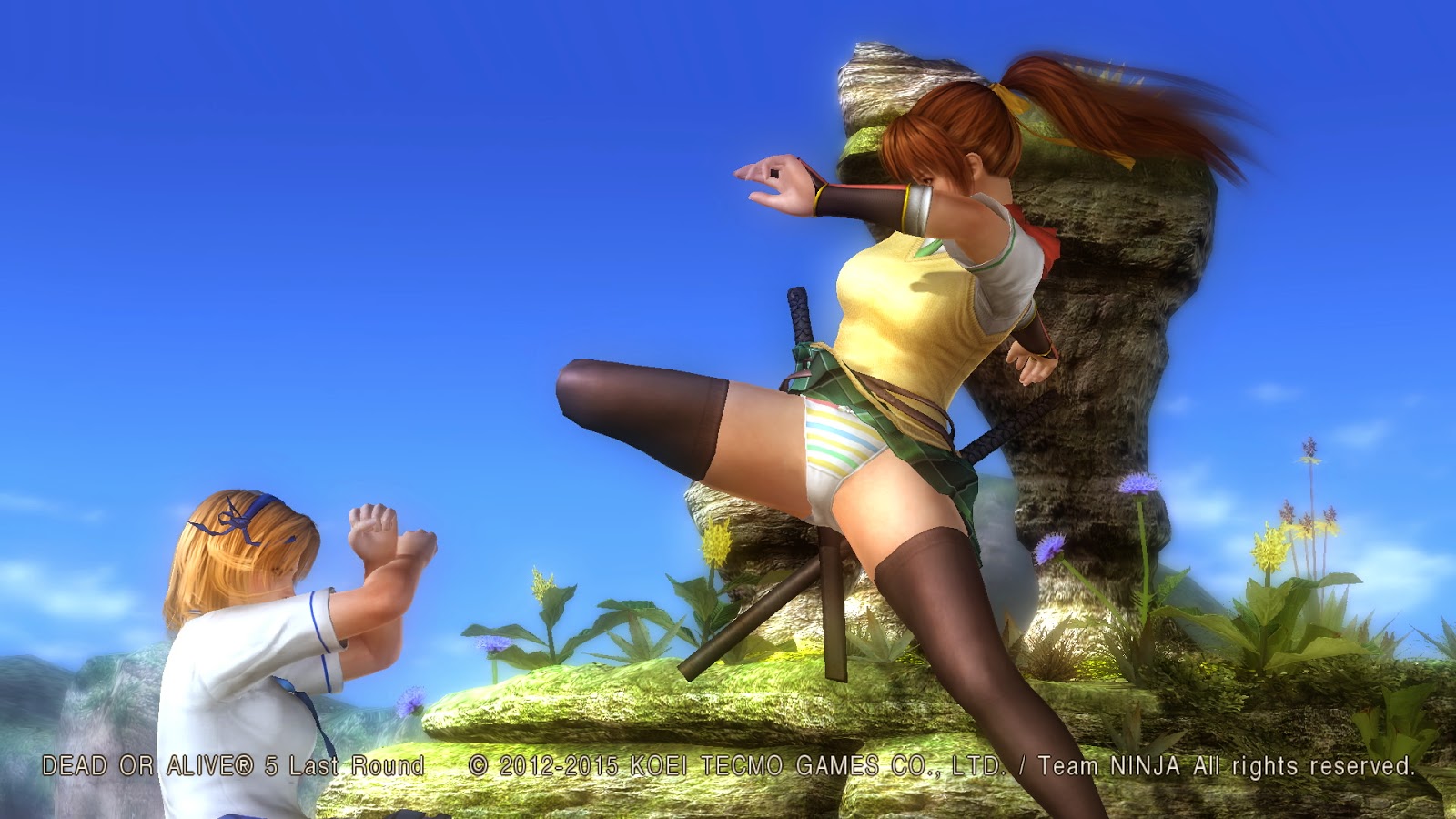 Putting aside for a moment that “sexist” isn’t really the right term here, and people are really talking about exploitation (which is a kind of sexism, but it is nonetheless more accurate to call it exploitation), Dead or Alive 5 and Mortal Kombat X, in terms of the impact of their content, are the same. Both games are satirical in nature. Both games are perfectly comfortable with what they are and wear it on their respective sleeves. Both games are completely optional purchases in a world where, believe it or not, people have different tastes to one another and some people enjoy violence, while others enjoy sexualised content. Still others like neither and don’t have to buy either games.

And yet the public discussion about these games goes like this: Mortal Kombat’s violence is acceptable, enjoyable, and it’s okay not to buy the game if you don’t like the idea of watching a guy being punched in the testicles so hard they explode. But Dead or Alive’s sexuality is supposedly unsavory, perverted and sleazy, and if you buy the game you’re contributing to the the ills of the games industry. “Sexualisation” is a pejorative term and never means something positive in games (or popular art in general, if we’re being real). But violence? Oh yes! Violence is a concept that we understand has creative and artistic value.

There’s a fundamental inconsistency on display here, and it’s so wide that it absolutely dominates and limits conversations about the topic; it’s difficult to have a meaningful discussion about a game with sex content when three quarters of the industry will dismiss it the moment they hear the title. No more perfect example of that was Lollipop Chainsaw – a game widely derided before it was even released because it stared a cheerleader, but when people fired it up they quickly came to realise that it was subverting the very themes that so many people were criticising it for promoting.

It’s fine if you have no interest in Dead or Alive, Senran Kagura, Criminal Girls, or any other game that comes loaded with sexualised content. The problem is that too many people out there convert that personal lack of interest into a criticism of the fundamental theme of the game. These are criticisms that are inevitably unsubstantiated (heck, people often haven’t even played the game before decrying its sex themes based on screenshots and/or trailer videos). And from there, these criticisms start to become criticisms of the people that enjoy the games. When being a “fan of Dead or Alive” becomes an ad hominem attack, then the conversations around the game are never going to have value. 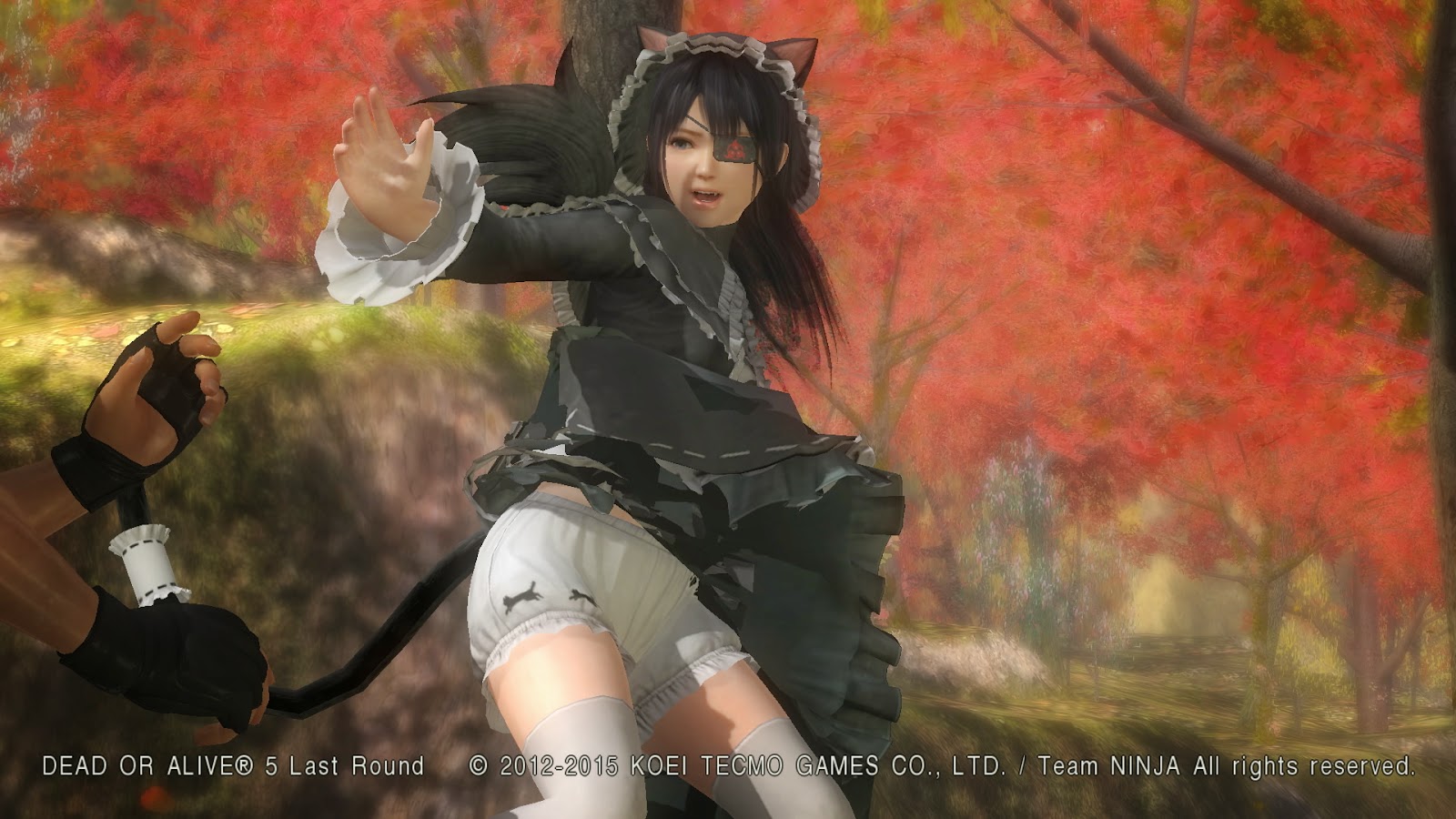 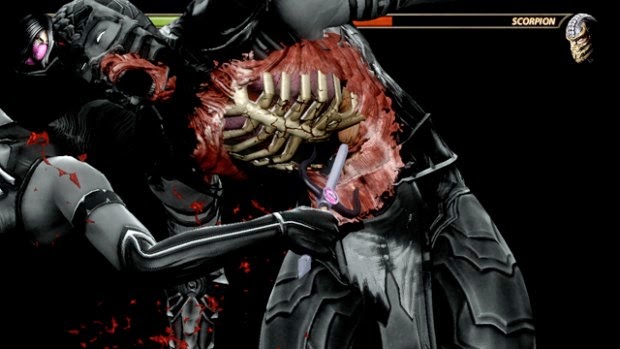 Sexualised content, on a fundamental level, is no more of a problem than hyperviolent content. In the hands of weak writers and developers, then yes, individual games can exhibit sexuality in an offensive or or exploitative manner, but then again, so too can violence. And it’s about time people stopped through “sex” around as a pejorative when talking about games.