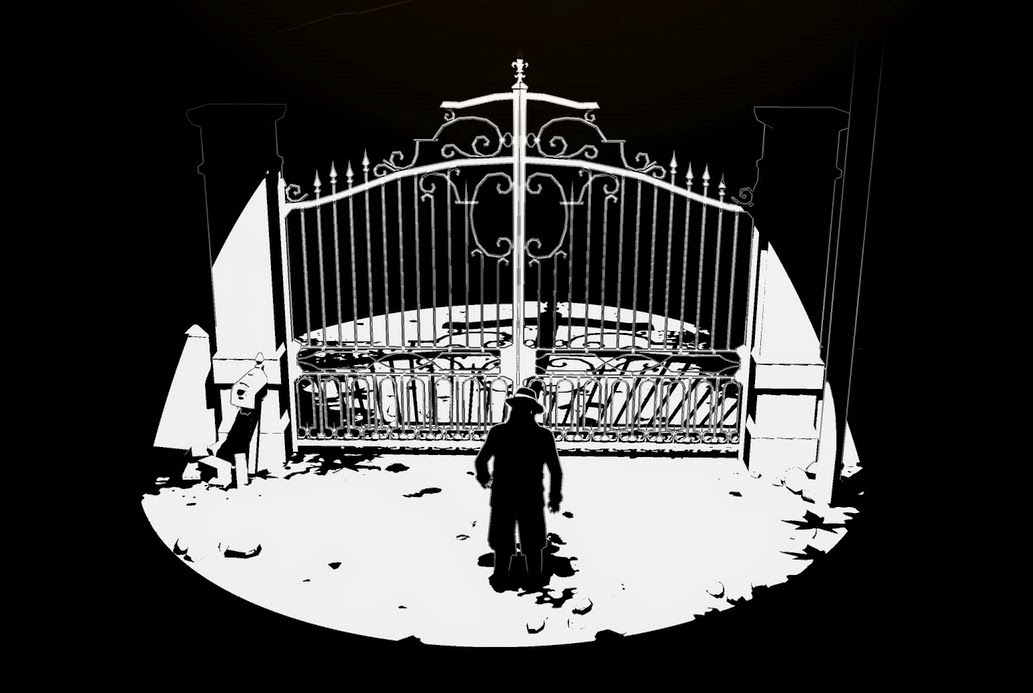 Horror has for the longest time been the place where newcomers have gone to learn their craft and launch their careers. We’ve seen any number of films over the years that have “discovered” talent as far ranging as Kevin Bacon (Friday the 13th) to Jennifer Aniston (Leprechaun). Modern films from Saw to Paranormal Activity have become major franchises thanks to the innovative ideas of a bunch of young, inexperienced people.
This applies in gaming, too. Setting aside the likes of Resident Evil, games like Amnesia and Outlast have been where the truly intense, frightening experiences have been found in recent years, and the source of a lot of the innovation in the genre. They were also the projects of smaller, independent teams. Small developers have not been afraid to experiment with ideas that might not go down so well with the mainstream, and in being willing to shoot for the stars the industry has discovered some real talent. And hey, they make mistakes, but in doing so we, the entire games industry, learns from their work and we’re all better off for it. Just as I’m glad John Carpenter was able to create Halloween in all its raw glory as a young, 30 year old filmmaker, so too am I glad that OSome Studio was able to kick start its development career with White Night.
White Night firmly deserves recognition as a game that is willing to experiment. It’s not just the visual style, which is so obviously unique that I don’t need to highlight it in words. No, what is truly experimental about this game is that it tries hard to merge two very different narrative genres together. 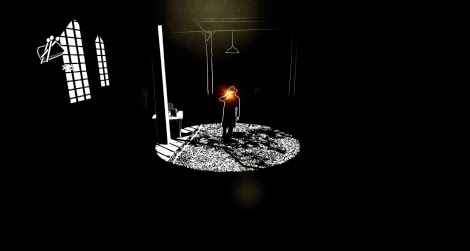 On the one hand it obviously wants to be a horror game, in the vein of classics like the original Alone in the Dark, Silent Hill, and Resident Evil. The protagonist finds himself trapped inside an isolated mansion that is simply filled with creepy things. As he tries to understand what is going on, and then escape the nightmare, he’ll need to use his brain to figure out where keys to unlock doors are hidden, and solve puzzles to access new areas. For people growing tired of the modern, linear direction that the likes of Resident Evil and Silent Hill have taken, White Night is a handy remedy. While the puzzles aren’t especially testing, they are a nice mental break from moments of action and raw fear, and this in turn gives those moments of fear greater impact, as it’s more difficult for players to desensitise themselves to the rhythm of the game.
The other genre that White Night aspires to is its unique twist; the game tries to be noir. And this is both fascinating and more than a little clunky. The protagonist delivers his lines in that deadpan hard boiled style that evokes Humphrey Bogart from his old noir films like The Big Sleep, and he has the hat to match. The art style also lends itself to a noir atmosphere, with heavy emphasis on the blacks, as well as the idea that the shadows conceal the dirty secrets of the home, just as the shadows hid the dirty underbelly of society of the noir novels and films.
But (and it’s a big but), noir isn’t horror. The revelations of a good noir text are certainly frightening, as they show just how corrupt, decadent, and dangerous a society is under the surface, but that’s just the point – a noir text is about society at its core. A story set in a haunted mansion where there is no society to speak of is a very different kind of narrative, and more of a personal experience divorced of social commentary. As such noir and horror are like seafood and ice cream – you might love them individually, but I’m betting you never sat back and thought to yourself how good they’d taste together. 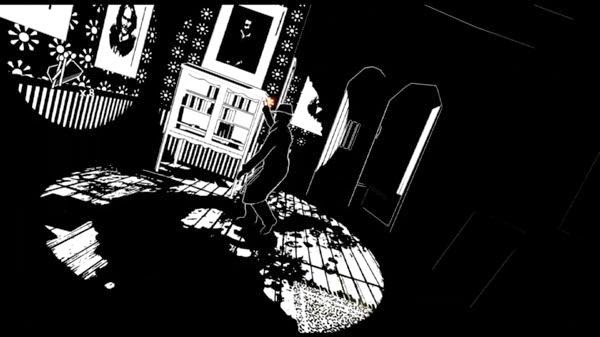 As striking as the black and white aesthetic is, it’s also the source of some frustration while playing. The only way to light darkened areas is to use a light source such as a match, or find the light switch in the room (which for obvious reasons means you need to use a match until it’s found). As such it’s very easy to miss something due to the limited radius of these kinds of light sources. Static camera angles don’t help here, either, as there’s often the sense that you can’t see what you actually want to, much like the frustration you’d feel from those early Resident Evil and Silent Hill games.
As such, the supplemental news clippings, books, and notes, that help to tell the story, are especially frustrating to track down, given that many of them are hiding within the darkness. I did, however, enjoy the tension that having a limited supply of light brought the game. There’s nothing quite so terrifying as being in a darkened room with death lying around every corner and down to the last match. That being said the game is generous enough with the light that most players will not feel like they are under too much time constraint.
There’s a lot to like about White Night, if for no other reason than it genuinely is different and these is real potential for this to spin out into a franchise if the development team can do a better job of rationalising the noir elements and figuring out the solution to a frustrating Easter egg hunt in the dark. The underlying vision alone makes it worth a look, but it’s not going to be quite remembered as the same innovative experience as those pioneering horror games it references back to.