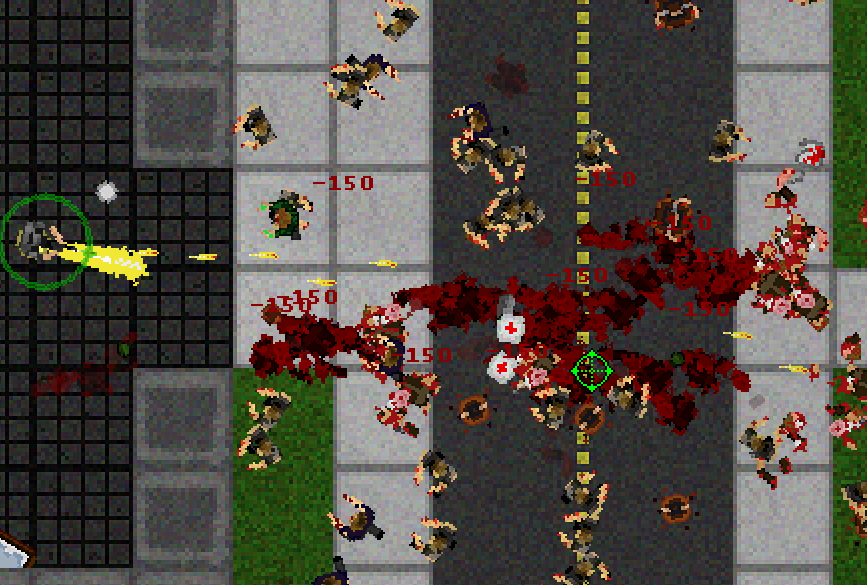 These days I feel bad for zombies. After becoming mainstream along with vampires and werewolves, how many apocalypses have they started and failed by now? They’ve tried to conquer the world in different ways but somehow humanity always seems to bounce back. So what happens when zombies go over 9000? Chaos, is what.

Over 9000 Zombies is a twin-stick shooter in the same vein as games like Burn Zombies Burn. Once a level starts, players attempt to survive for as long as they possibly can, taking out as many zombies as possible. Using a much more basic visual approach, almost giving off an 8-bit vibe, players will find themselves in a level of their choice facing off against an endless horde looking to do what zombies do and make a snack out of their brains. Utilising a day and night cycle players will have to also place defences around the place to help them out, as once night falls visibility is drastically reduced and the dark will work against you.

Following the day and night cycle players will find themselves able to catch their breath as they survive through each day. Between each day, the zombie horde will back off for a set amount of time that can be used to repair and set up new defense. Like most twin-stick survival games each wave, or day in this case, amps up the difficulty continuously challenging the player to stay alive. In addition to the tower defence features are some like RPG mechanics. Over time players will acquire upgrades that add extra health or increase the ability to deal damage. As well as these player upgrades are unlockable weapons, offering different styles of attacks such as shotguns for slower but more powerful blasts, and sub-machine guns that deal less damage but send a lot more bullets flying.

Now while the upgrades are nice, a survivor needs more than just stat upgrades and new weapons. Sadly humans still only have two hands so to give us more advantages we learnt to build walls to keep us safe. Equally sadly, Zombies can destroy these to make it through to you. That’s where the turrets come in. Available to survivors are a variety of turrets from the standard munitions types and flamethrowers through to more exotic plasma and rail guns. Each of these have their own scrap metal costs, but since zombies get into everything, scrap metal is easy enough to come by for building and keeping your defenses in repair. There is a limit as to how many of these can be operational at one time so placement of these is key to your survival.

On top of a single player mode, Over 9000 Zombies supports both local and multiplayer options as well as online leaderboards to see who does survival best. The game has a smallish community, but it’s growing, with the last attempts found me ranked both in the mid four hundreds and the low five hundreds just a day apart from one another. Seeing some of the highest scores, I clearly have a lot to learn in the ways of zombie slaying. 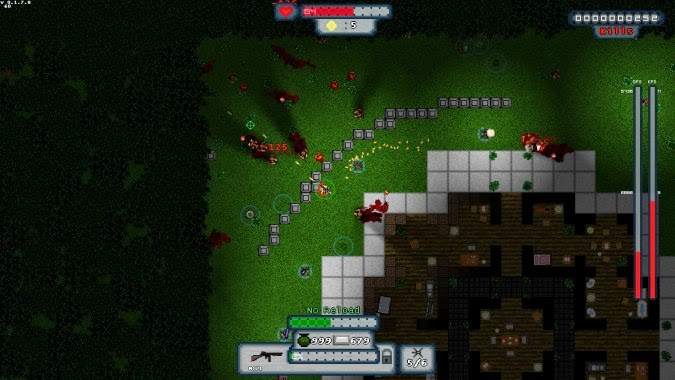 While the basic premise is a simple one, it is the added elements such as the day and night transitions, defense building, RPG-like elements and that online leaderboard that makes Over 9000 Zombies quite the enjoyable arcade game.