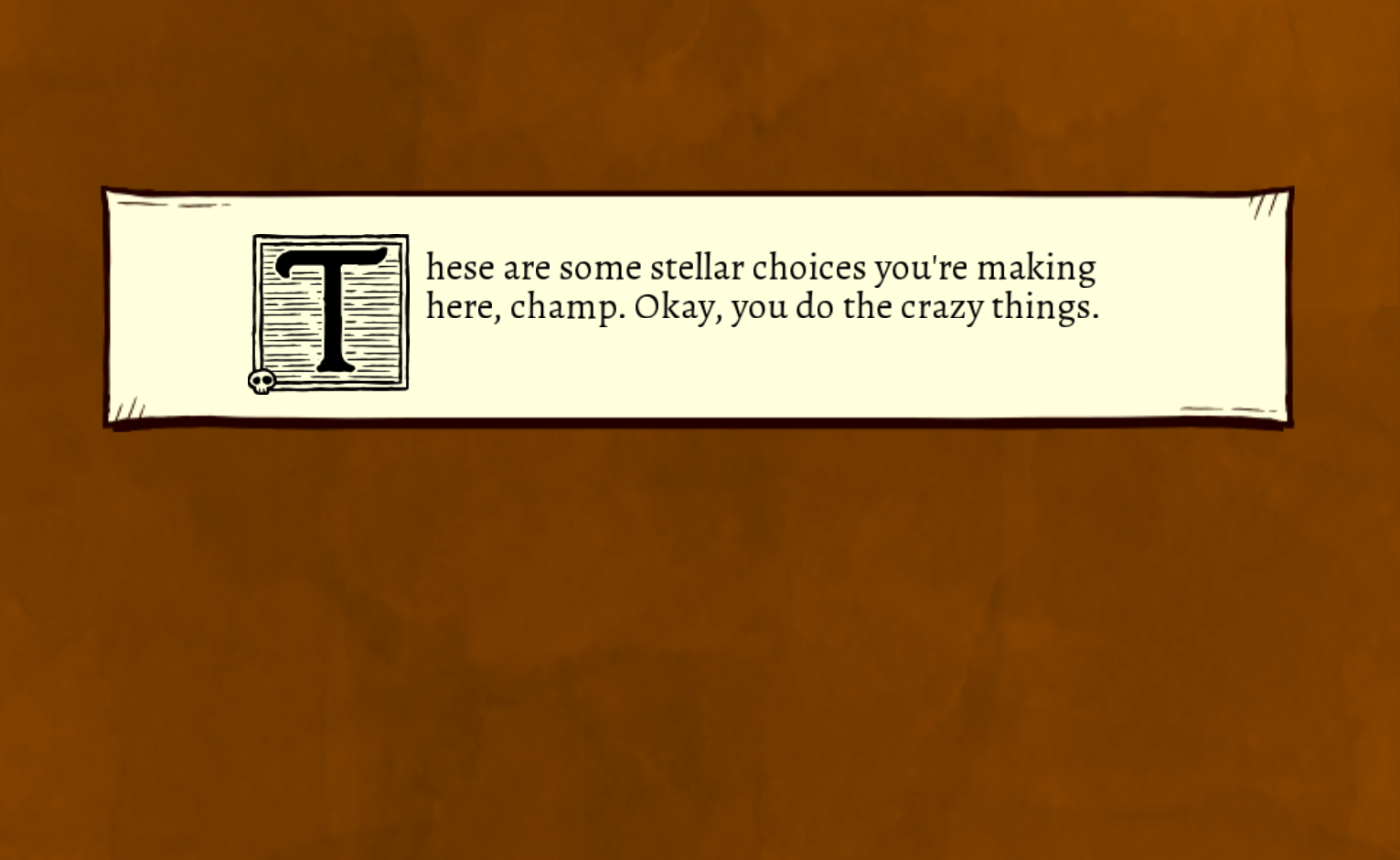 No. Ryan North’s To Be Or Not To Be had me in tears of laughter. One of the most successful Kickstarters ever, the print edition of this choose-your-own-adventure game was already outrageously funny courtesy of it being the work of Ryan North, but it has been made even better by the work that Tin Man Games put into digitising it. Playing this game made my better half want to hurt me because my insane giggling work her up in the middle of the night.

Of course, part of the appeal of To Be Or Not To Be is the fact that I can recite Shakespeare’s Hamlet from heart, which this is obviously based on. I studied that play at least six times when I was a university student, and I know it cover to cover, as well as its themes and the various plays and books that were built around it (such as Tom Stoppard’s brilliant Rosencrantz and Guildenstern are dead). What instantly appealed to me about To Be Or Not To Be is that North is clearly as familiar with the play as I am. It’s an end-to-end parody of the Bard’s great work, but it’s a parody that comes from real expertise. 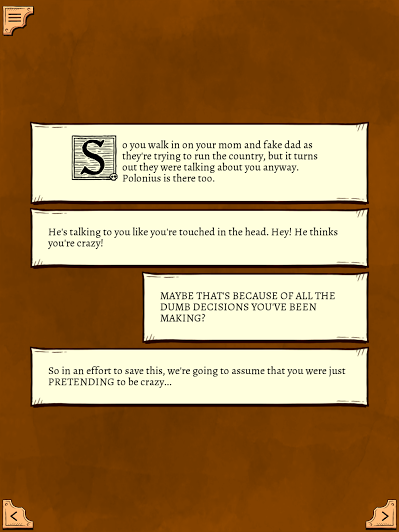 First, though, the gameplay – this is a choose-your-own-adventure gamebook, Nothing more, and nothing less. Unlike most of Tin Man Games’ work (such as the Gamebook Adventures franchise) there’s no RPG elements in here; no dice rolling, and no health points, maps, or anything similar. You’re simply sitting there selecting which dialogue option or action to take next.

It sounds dull, right? It’s not. It takes about five minutes of reading to understand why not. In five minutes you become immediately aware that, with an incredible understanding of Shakespeare, North sets about deconstructing everything about the play that is problematic or illogical by modern context, and highlighting it in the funniest way possible. Hamlet’s insanity (or falsified insanity) has been a point of contention in more conversations about the play than I care to recall, and North simmers those discussion down to a very simple (and very funny) reality – either way, it’s a bit of a narrative contrivance.

Later on, North gets a little meta, throwing in an extended pirate chase and combat narrative, and then noting that “you’d be stupid to ignore such an important, exciting scene if you were writing this as a play” (in Hamlet, the pirate scene is simply mentioned in a letter from Hamlet). He also regularly takes shots at the antiquated attitudes towards gender expressed in Hamlet, and gently ribs the audience for selecting the more misogynist options when given a choice between two different actions, even when the “misogynist” path is, in fact, the accurate one to the play. Like a good comedian, North’s work never stops being bitingly, fourth wall-breaking funny, but it’s presented in such a good spirit that it actually works a little like Baz Lurhmann’s classic film, Romeo + Juliet in how effectively it contextualises the story for a modern audience. 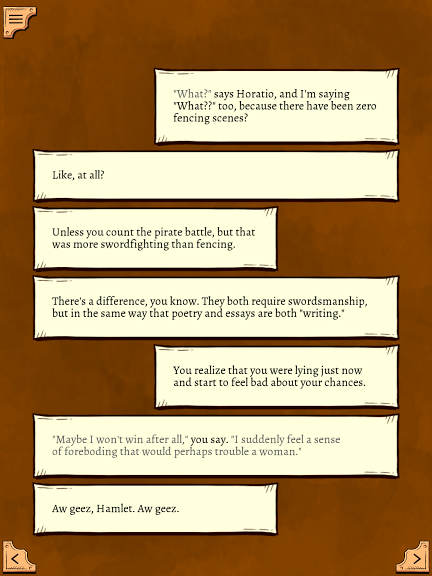 For players that want to follow the book as “Shakespeare would have played it,” there’s a little skull icon next to the ‘right’ choices in the decision-making segments. Choosing alternative options will cause the narrative to deviate into hypothetical ‘what if’s,’ and that in itself is a fascinating way to study Shakespeare – to consider what’s happening in the narrative and to the characters outside of the core narrative. In fact, that’s the precise exercise that led people like Tom Stoppard to write plays like Rosencrantz and Guildenstern are Dead.

Tin Man Games really benefited from having this material to work with. Its gamebook engine works perfectly well to highlight the humour of the text, and then emphasises it with a couple of tricks that aren’t available to the printed form. When you get up to the Party Boat scene, and the music kicks in, then I defy you not to laugh out loud.

I genuinely believe this kind of game is something that anyone studying Hamlet should play and should make it part of their extended studies of the play. That’s not to say it’s not entertaining, because it really is laugh-out-loud funny and working through some of the decision trees gives it a lot of replay value. But in addition to that entertainment value, it’ll give you a very different way of looking at the construction of Hamlet, the play, and that is valuable stuff in developing a deeper understanding of one of Shakespeare’s greatest works.