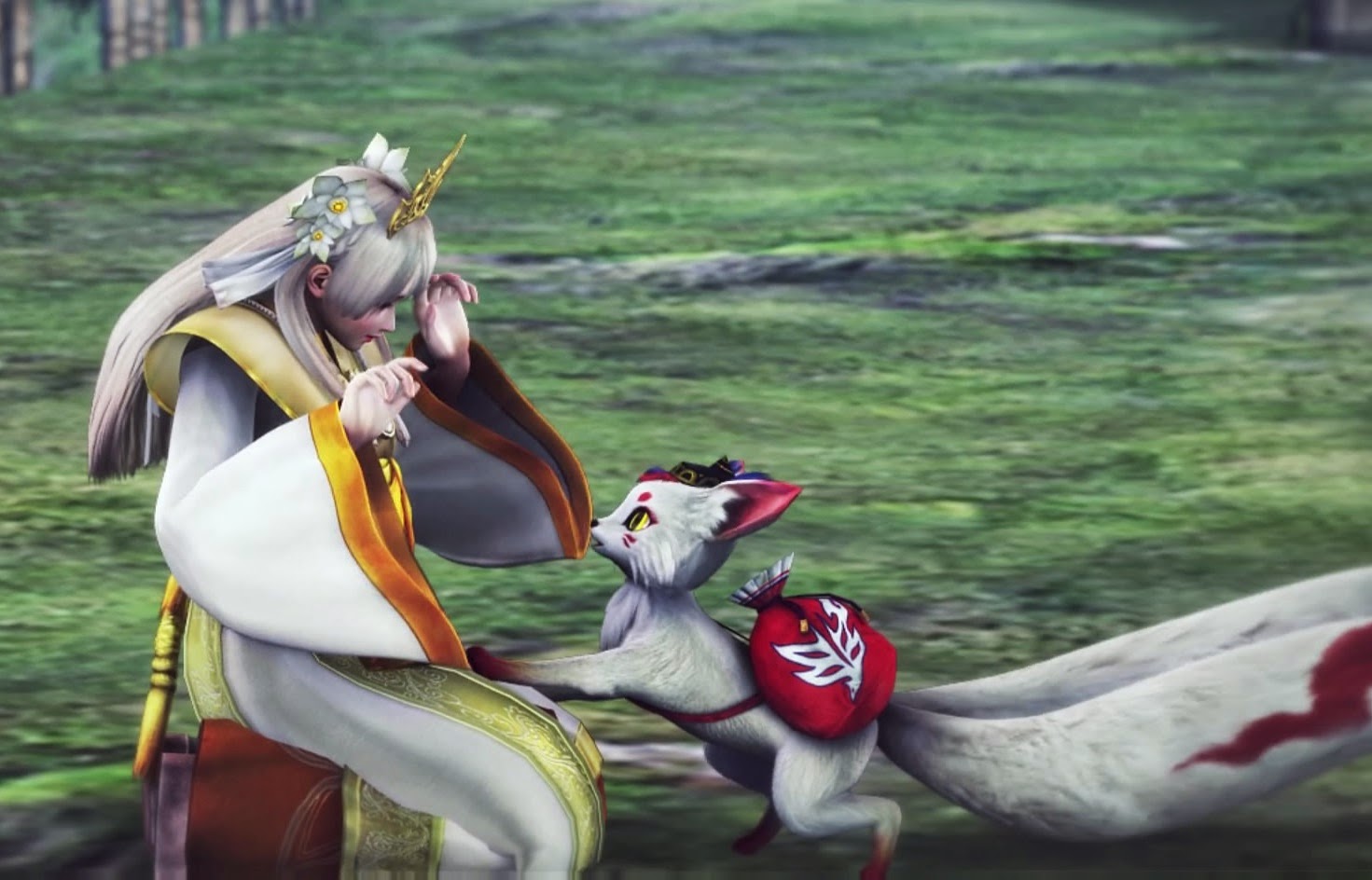 Toukiden: The Age Of Demons was a very positive first attempt in Koei Tecmo’s effort at building a Monster Hunter killer franchise. It managed to offer some tweaks to the core concept that sees players spending nearly an hour of their day battling a single, hulking beast. But more importantly than that, Toukiden was that the game felt like it had a grander vision than its competitors. Where Monster Hunter has been largely content with a refined gameplay experience and monster design over its many editions, Toukiden dreamed of bringing together narrative, setting and the monsters to form a cohesive whole.

Related reading: Toukiden: Kiwami is an extension of the original game. Click here to read more about it (and therefore this one).

It largely succeeded at that too. Rooted in Japanese mythology and name dropping various heroes through Japan’s history, Toukiden offered an environment that told its own story, contextualising the battles with the monsters as something more worthy and meaningful than the simple thrill of the hunt. As such, as far as I was concerned, it was the superior game to Capcom’s mammoth franchise.

And now the Toukiden franchise is streaking ahead of Monster Hunter in another meaningful manner. Where Capcom opted to release the last Monster Hunter title as a Nintendo 3DS exclusive, Koei Tecmo has instead realised that when it comes to battling against behemoths, perhaps people want to take the fight to the big screen. Toukiden: Kiwami is the first Monster Hunter clone on the next generation of hardware, and it’s essential stuff for anyone who has ever enjoyed this kind of game. 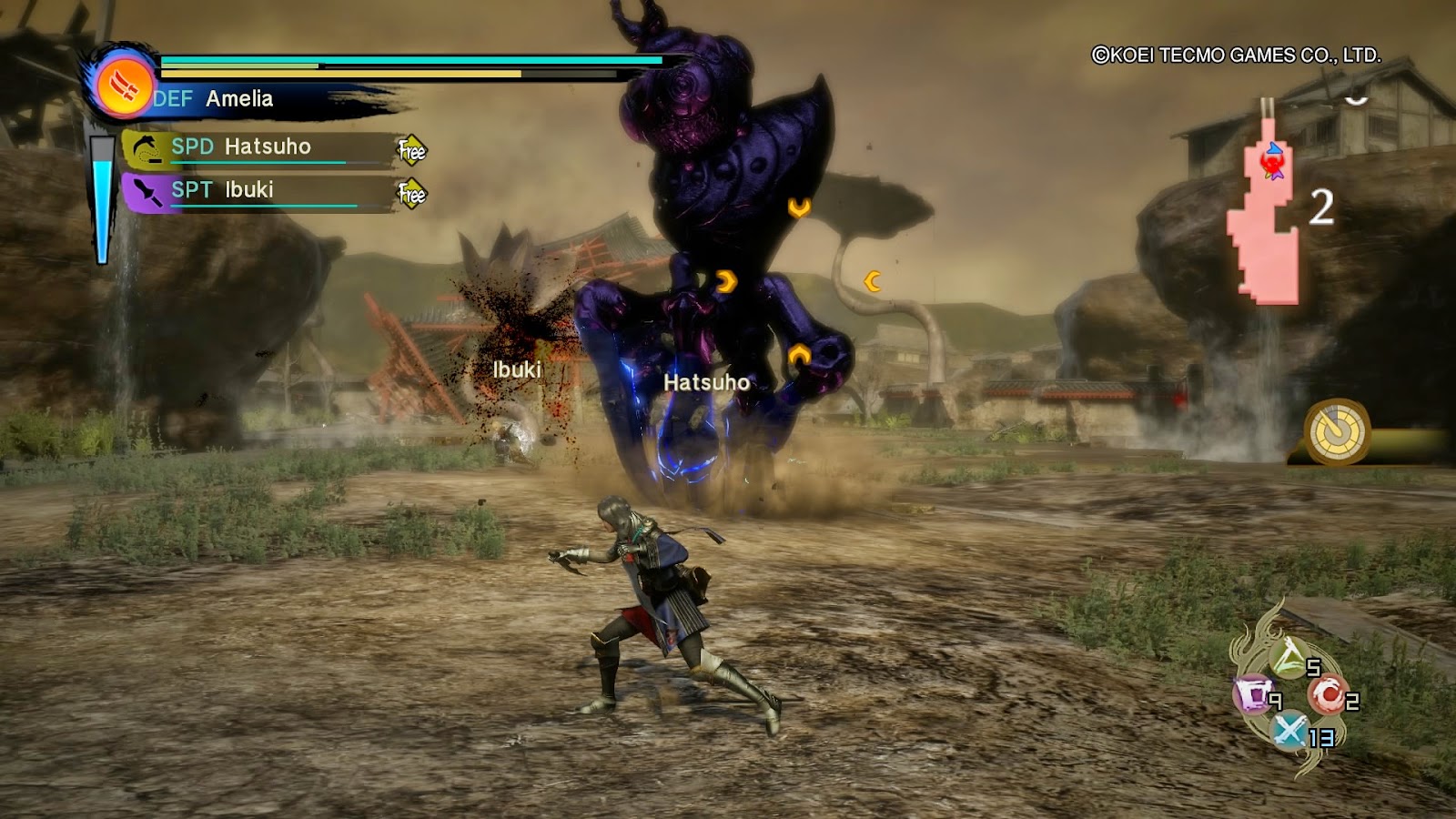 That’s not to say it’s the most technically expansive game on the PlayStation 4. The original Toukiden was a PlayStation Vita exclusive, and this game isn’t so much a sequel as an extension of the original game. That means that there’s a certain sense that Kiwami on the PlayStation 4 is a ‘blown up’ version of that Vita original. The assets have been rendered in high definition, of course, and the artistic direction is gorgeous, but environments lack a level of detail that we might have otherwise expected, and character models are relatively minimal in range and expression. None of this necessarily matters when you start fighting the behemoths and are diving around the place trying to work out how to take down something that’s filling the entire screen, but if Koei Tecmo is planning on turning this into a more extended franchise, one has to hope that the first proper Toukiden sequel is designed with the PlayStation 4 as the lead platform.

The game plays gloriously on the PlayStation 4. The base structure remains the same as the original game; you’ll create a hero and then pit him/ her against increasingly more powerful and difficult enemy monsters. As with Monster Hunter, there are a wide range of weapons to choose between, from speedy daggers to powerful ranged attacks, but beyond Monster Hunter, it’s possible to acquire ‘Mitama’ and apply them to your weapons. Mitama are spirits from other eras of time that improve your character’s abilities, as well as giving them access to a small selection of special powers, or spells, which can help take down the more powerful beasts. Some of these spirits offer defensive abilities such as shields to absorb enemy attacks, while others boost the character’s attack powers. Teaming the right Mitama to suit your play style is a fun learning curve, and further, these spirits earn experience from battles and can level up, which grants them (and therefore, your character) with additional abilities.

Just like Monster Hunter there is a complex inventory system, where you’ll find yourself acquiring a load of loot during each mission, which can be used to create more powerful equipment or upgrade existing stuff to make it more powerful. There’s a degree of grinding involved in this process, though in Toukiden the Mitama help to ease the reliance on good equipment to have a hope against the more powerful enemies. With this Monster Hunter genre I often find myself stuck in a dredge of repeating specific missions over and over again to try and acquire rare materials to use for my equipment, and I do think Toukiden does a better job than most in keeping this flowing forward. 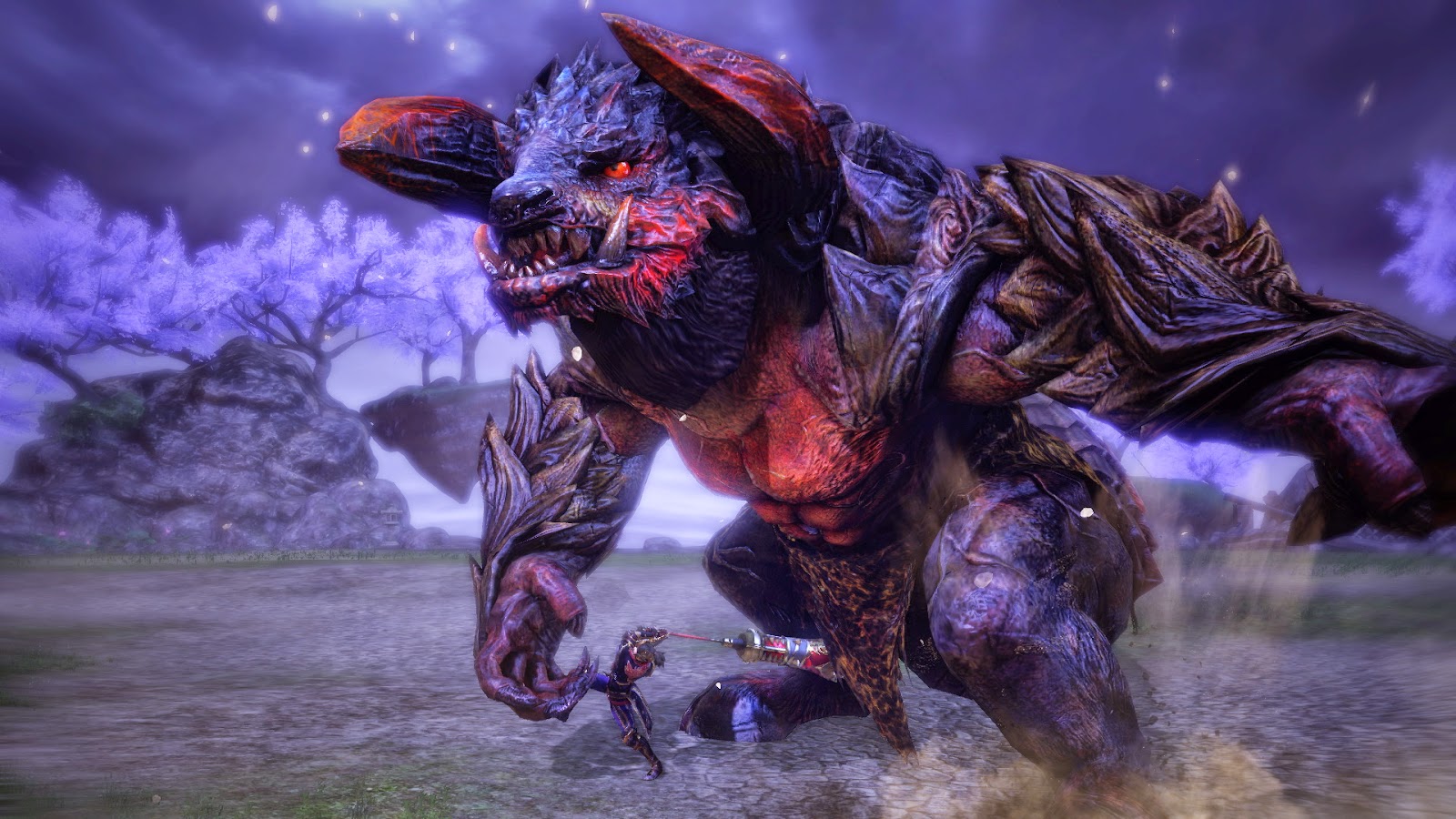 It’s the combat where Toukiden really sets itself apart from its peers. There’s a full enemy lock-on system that many (including Monster Hunter itself) lack. This lock-on which is valuable, because enemies have multiple weak spots that need to be targeted in order to remove bits of them and temporarily incapacitate them, and you simply don’t want to be fighting with the camera while trying to target these spots. Characters can also slip into a spirit realm where they can see how damaged the various parts of the enemy monsters are, and how much fight its got left in it. Being in this spirit realm drains energy, however, and it’s the same energy that characters use to run or dive around, so it becomes a major part of the strategy of the game, knowing when to activate that ability when that might quickly leave the character vulnerable to attacks.

The monster designs are excellent, and challenging, even if the attack patterns are a little too predictable and mechanical. Monster Hunter was always highly successful in creating monsters that behaved randomly enough that you’d need to be on your toes at all times to succeed against them, and that is something that we’ll want to see improved in the next Toukiden game. But nevertheless, some of those attack routines are a nightmare to try and learn and then counter. The learning curve behind this title is still sharp and it has a real bite it’s all too happy to turn on players.

With Kiwami you’re getting all the content of the original game, as well as a host of missions, challenges, and Mitama to fight and acquire as a kind of end game. This content doesn’t so much to expand on the Toukiden narrative and universe, but it does add significantly to the play time. Teaming up with four buddies to take on the endgame epic challenges is one of those truly special moments of multiplayer gaming, and completing the same missions by yourself is an achievement to be proud of. 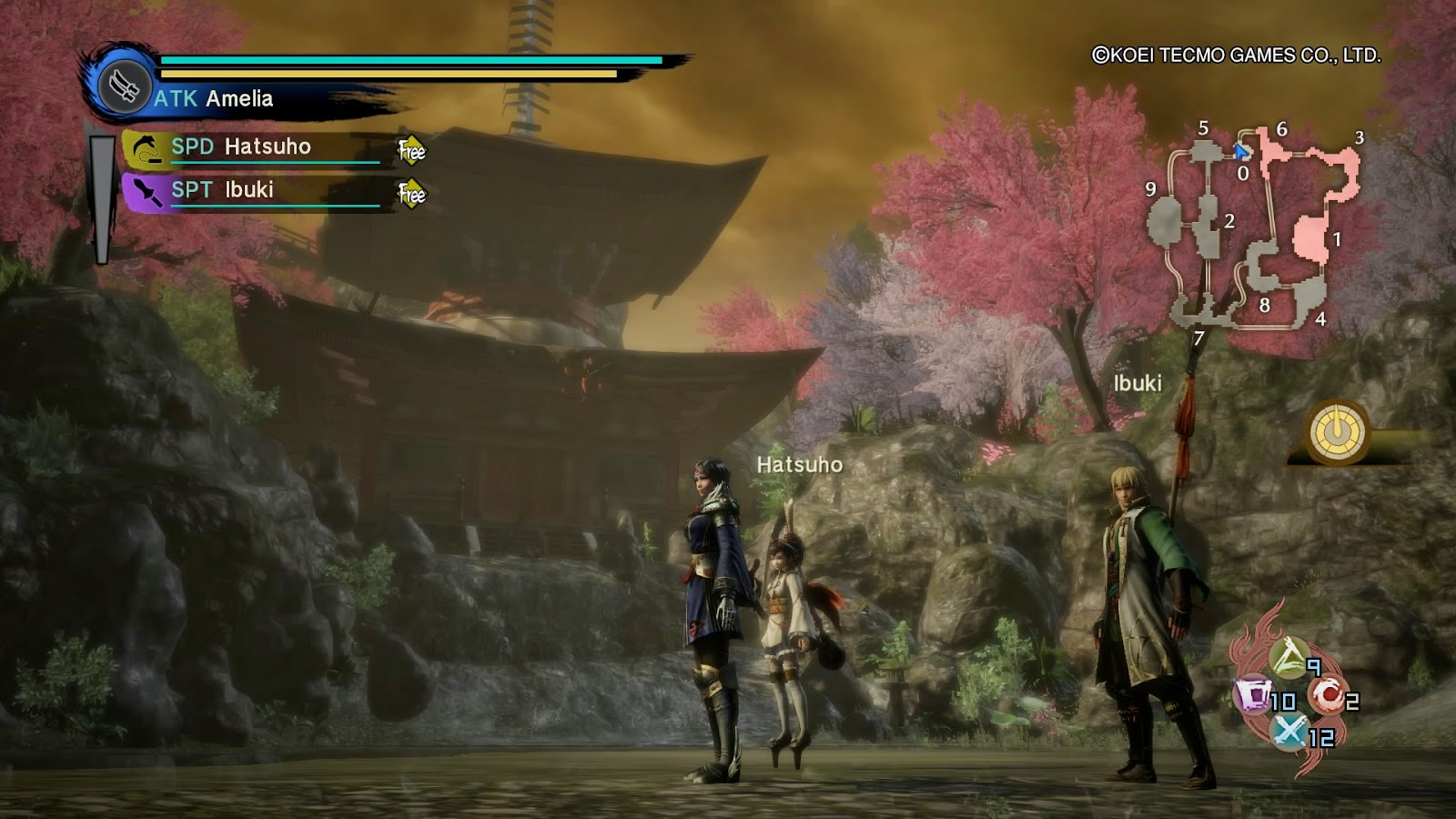 But the true value of Toukiden, and now Kiwami, is the sheer respect and love for Japanese heritage that drips through its atmosphere. From the Torii structures, through to the dual-tailed Tenko foxes, Toukiden is every bit the artefact of history and culture that Omega Force’s other games, such as Dynasty Warriors and Bladestorm, have traditionally excelled at. Toukiden is an artful, intelligent Monster Hunter ‘clone,’ and Koei Tecmo is on to a winner with this franchise.

Review: Ryan North’s To Be Or Not To Be (Apple iPad)