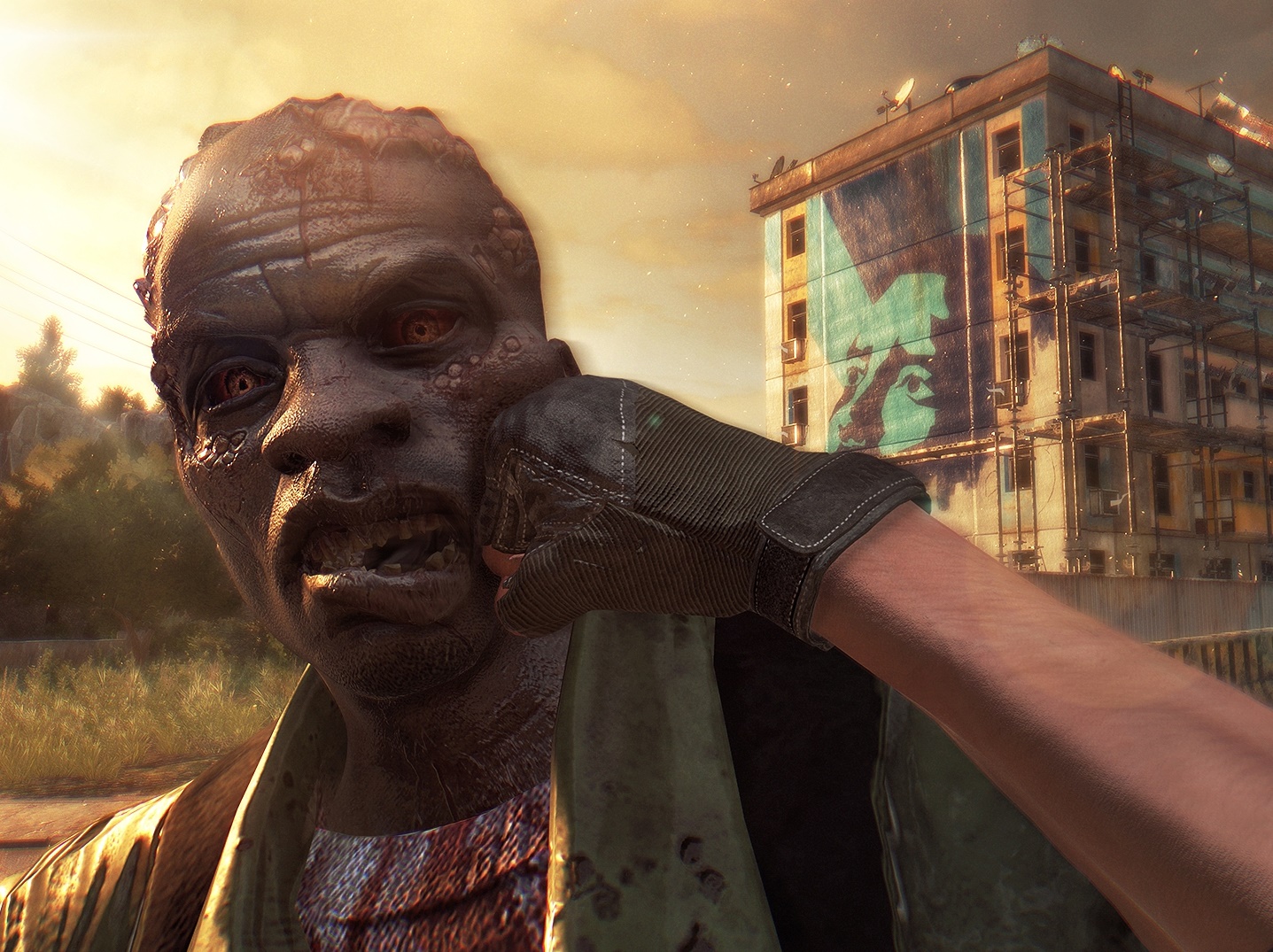 In the grand scheme of things, I haven’t really been (seriously) playing video games for that long (I only started taking video games seriously around 10 years or so ago), and I’ve spent even less time writing about them. Still, I’ve always had this weird, hard to define, love/ hate relationship with developer Techland. Some of its entries in the Call of Juarez series (most notably Gunslinger, from a couple of years back) were refreshing and original games. On the other hand, The Cartel is perhaps one of the worst, and arguably most racist, games I’ve ever played.

The Dead Island series, meanwhile, always felt like the awkward child of the family; with moments of excellence and genuine fun brought down by awkwardness and clumsiness, as if the series was never able to find its stride. Despite its flaws, the original Dead Island had fleeting moments of brilliance. Its sequel on the other hand somehow managed to do everything a little worse. 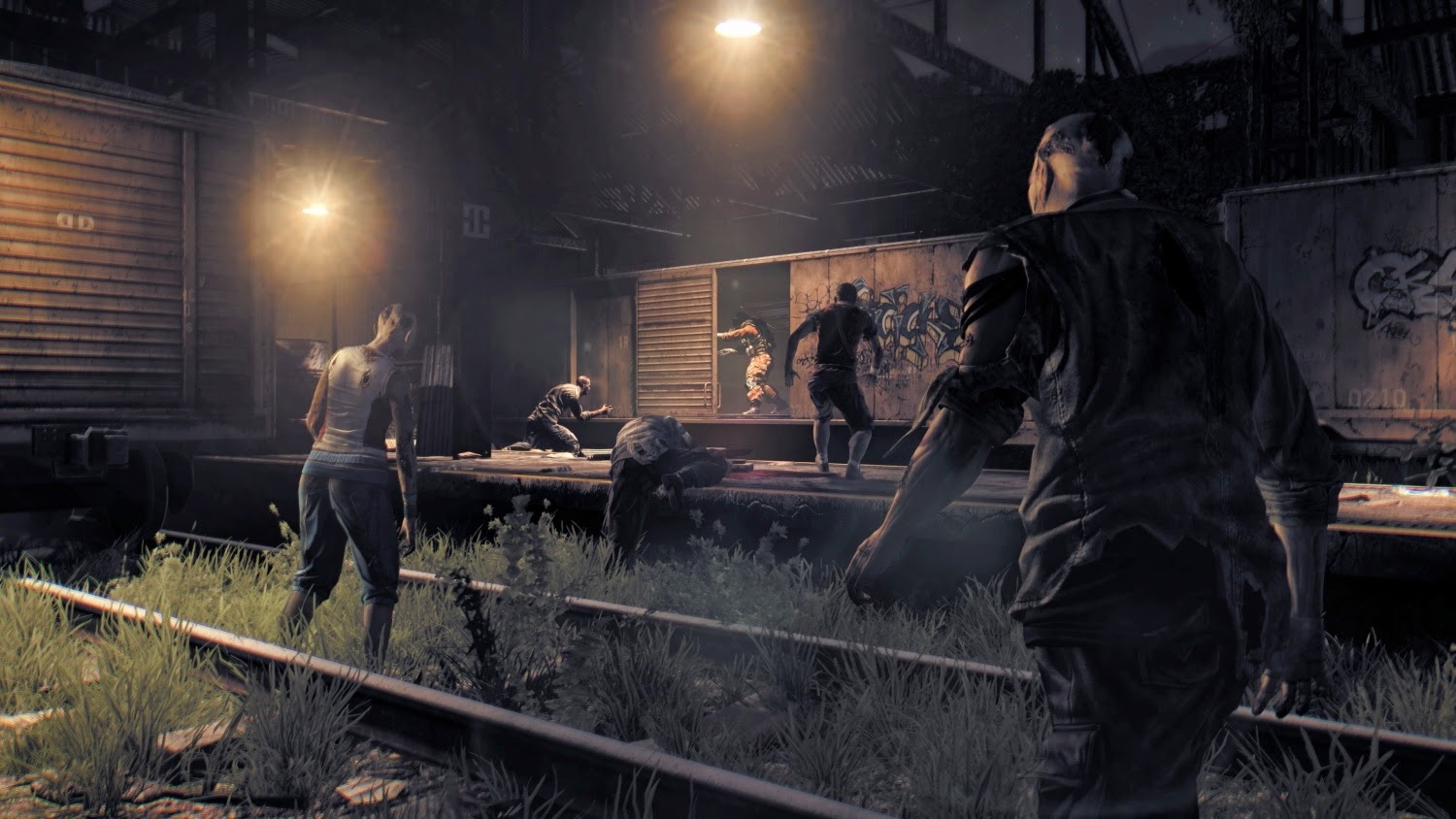 As luck would have it, the opportunity arose for me to review the next game in Techland’s ongoing suite of open world, zombie ridden games. I’ll admit, I was originally skeptical, especially since review copies went out just 12 hours before the game’s launch, which can often be a sign of worry. As it turns out, Techland and Warner Bros. should have had more faith in the product, as Dying Light might just be one of Techland’s best games to date.

If you’ve already spent slogging through the world of Dead Island, you’ll immediately notice that a lot of the gameplay and design loops are lifted and placed directly into Dying Light. Combat is virtually the same; the focus is once again on melee weapons, which have a distinct sense of weight to them. Unlike a lot of action games, there’s a deliberate sense of unwieldiness to the controls, but it works within the confines of the game quite well. After all, what’s the fun in easily mowing down zombies over and over? And as expected from Techland, melee weapons do deteriorate over time, though you can choose to repair and upgrade them with scraps and tools found around the world. Gunplay is an option as well, but much like Dead Island, it takes a while for them to become available, and even when they are at your disposal, ammo is scarce, and firing off weapons attracts zombies, so it’s a risky proposition. At the end of the day, the more subdued and quieter melee weapons are generally the way to go.

While we’re on the topic of similarities, Dying Light also adheres to the same progression system we’ve seen before. Aside from a core set of story missions that will advance the plot forward as you tackle them, there are a handful of side missions doled out by various NPCs, which usually reward you with money, weapon blueprints, and such. There’s an XP system as well, though this time it’s split into three different attributes; survivor, agility, and power. Each skill tree ranks up on its own, and progression is directly tied into certain actions. Attacking zombies and other survivors will net you XP for power, while freerunning and parkour will help raise your agility level. 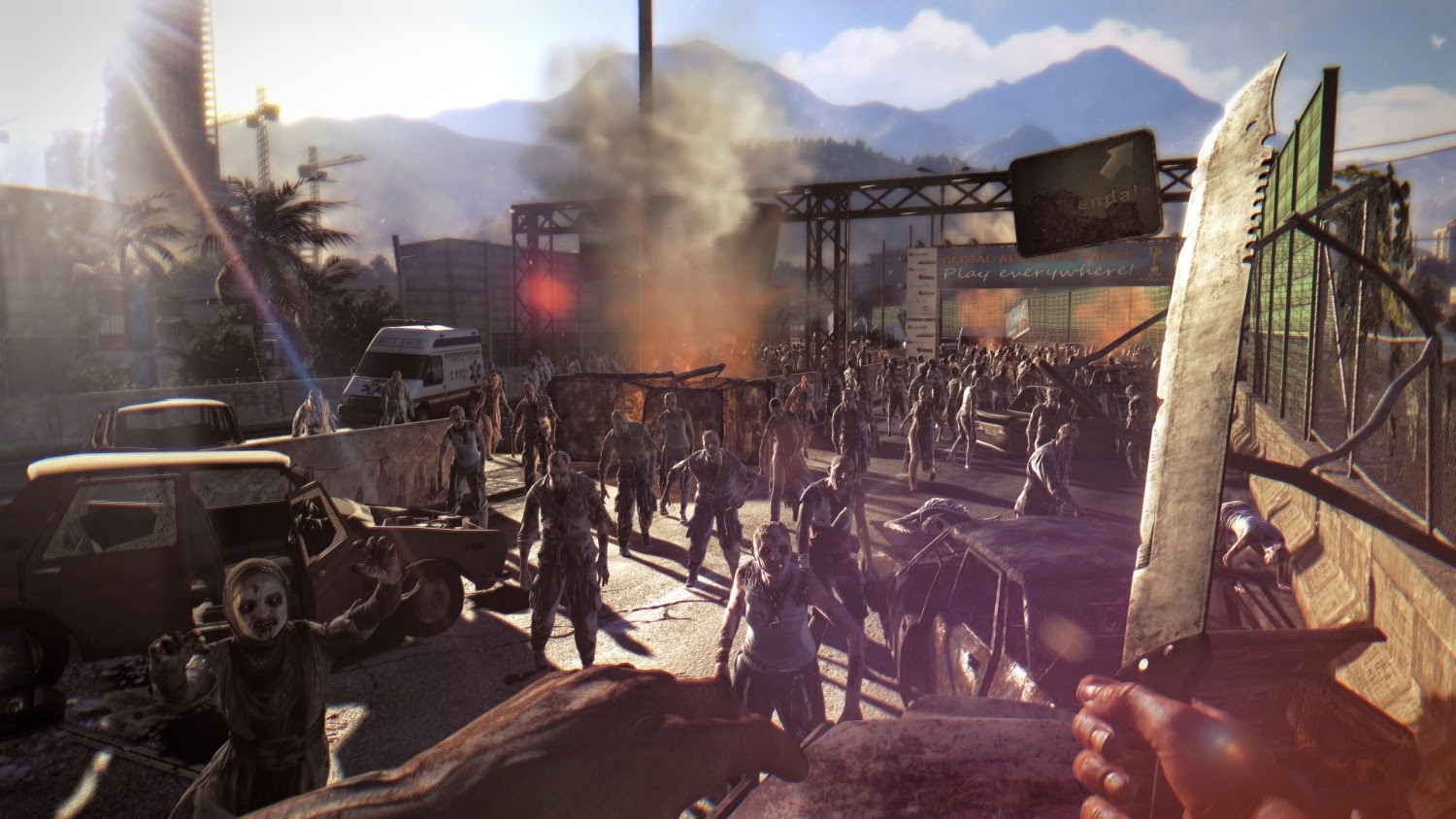 There are plenty of returning elements from previous Dead Island games, but Dying Light sets itself apart from what the game adds to the formula. The addition of parkour and freerunning might seem like a bad idea for a first person game, but in practice it’s the best thing Dying Light has going for it. While it’s not as fluid as robust as Mirror’s Edge, the ability to scale buildings and weave through crowds of the undead is something we would like to see in more games moving forward. As an experiment, I decided to boot up Dead Island and give it a go for a bit, but within a few minutes I immediately began lamenting the rather bare-bones and rigid movement system. Much like the ushering in of exosuits in first-person games, the ability to freerun around the city is going to be a necessity now rather than a neat feature, mainly because it completely changes how you handle traversing around the zombie horde. Rather than having to schlep your way through streets filled with the shuffling undead, there’s the much more attractive option of running from rooftop to rooftop, completely avoiding encounters until they become absolutely necessary.

That doesn’t mean the game is a complete cakewalk however, as the day/night cycle does a formidable job of keeping players on their toes, especially if they’ve grown accustomed to the more relaxed nature of the daytime. As the sun sets, a special type of zombie known as the Volatile starts to emerge, which are leaps and bounds more powerful and agile than their daytime counterparts. In short, should you walk into their field of vision, they will relentlessly chase you down, and while you could attempt to fight back, your best bet will almost always be to run. There are a few neat tricks at your disposal, including a ‘survivor sense’ which will highlight nearby threats and pickups, and the ability to look back as you are running, to see how closely you are being pursued. I have to admit, there were a few times I looked back as I was running across the city, only to find I was mere feet away from a pursuing Volatile, and those were incredible moments. Dying Light might not be as inherently frightening as your traditional horror games, but it does have its moments. For a real kick, there’s also the option to play the game with up to 4 players cooperatively, and a separate mode (titled Be the Zombie) allows you to invade other players’ worlds as a more advanced zombie, in an attempt to take out human survivors. 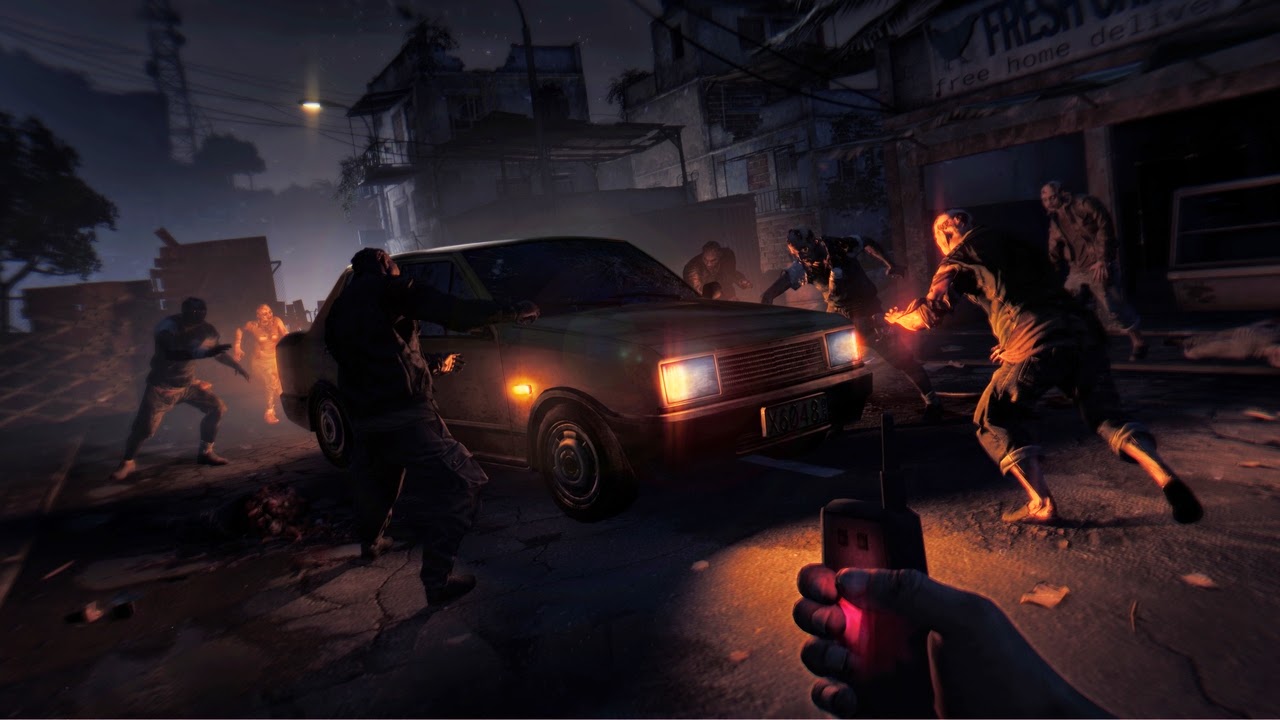 While it does tend to drag on and revert back to the point of generic at times, Dying Light is much more confident when it comes to its storytelling, and in comparison, is leagues ahead of the amateur and rather laughable production that was Dead Island. The premise and outset is surprisingly interesting, as you take the control of a covert agent sent into the infected city of Harran, tasked with recovering a stolen file that could spell doom should it be leaked. Of course, things never pan out as smoothly as planned, and you soon find yourself playing errand boy for the two waging factions in the city as you continue to send updates to the higher-ups at your unnamed agency. I’ll admit, the story can border on cliché at points, but it’s carried by a cast of interesting characters, with some solid voice acting and character models to boot. Dead Island and its sequel featured some of the most dead-eyed mannequins I’ve seen in a while, so it’s nice to see Techland putting in the effort where it was desperately needed.

I also have to take the time to applaud the developers for not only setting a game in a much more interesting locale (the city of Harran is, from what I can tell, based on Turkish cities and architecture), but for filling it with appropriate (and not stereotyped) characters, that are voiced convincingly. It’s something I might expect in big-name games like Assassin’s Creed and Sleeping Dogs, but not something I necessarily expected from a smaller-tier studio like Techland.

I would have simply been content with Techland releasing another Dead Island game, as long as it came with some needed polish to help it realise its potential. Instead, we got Dying Light, a surprising mix of old and new, which has managed to once again rekindle my excitement for both the genre and the developer. It may stumble every so often, but Dying Light is still the most fun I’ve had in a while.