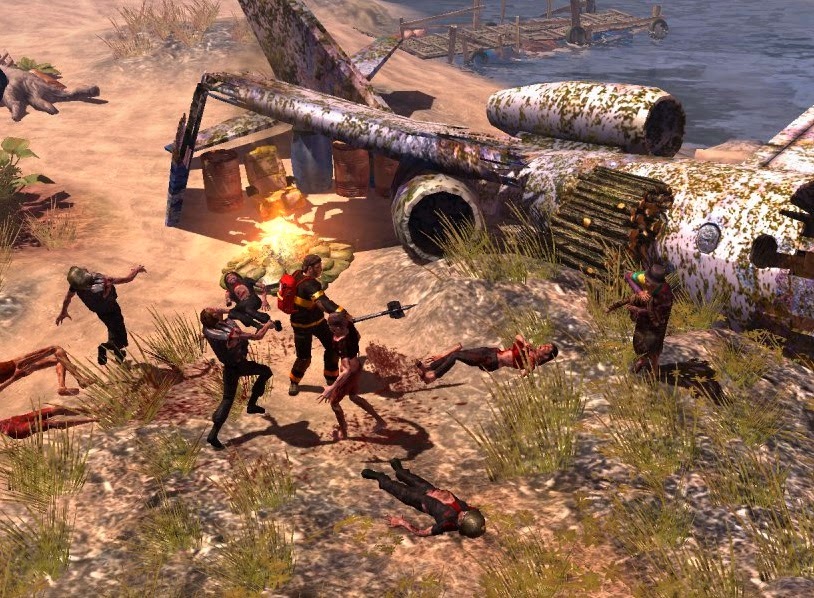 Take Dead Island, and cross it with Diablo. Sounds great, right? This is the game that How To Survive aspires to be. The good news is that it’s perfectly serviceable. The bad news is that that’s all it is.

How To Survive is a story that surely we’re all familiar with by now – we take control of a character that has been shipwrecked on an island only to find that said island is crawling with undead, and a precious few other survivors that are just scraping by. The ultimate goal is to, of course, escape, and this will require players to travel to other nearby islands to gather resources to get a crashed plane working again, and slaughter legions of the undead in the process. And there’s no more to the narrative than this; it’s purely B-grade stuff, and not even the scathing social criticism of Romero’s original zombie films has made its way into this game.

Enemies need killing, resources need gathering and those few survivors need stuff to be fetched for them because for various reasons they can’t do it for themselves. How To Survive badly wants players to feel a sense of urgency about their survival; the game tracks three different survival statistics – hunger, thirst, and fatigue, and the numbers behind each of these statistics drops quickly; players will constantly need to be on the lookout for places to rest, food and fresh water sources. 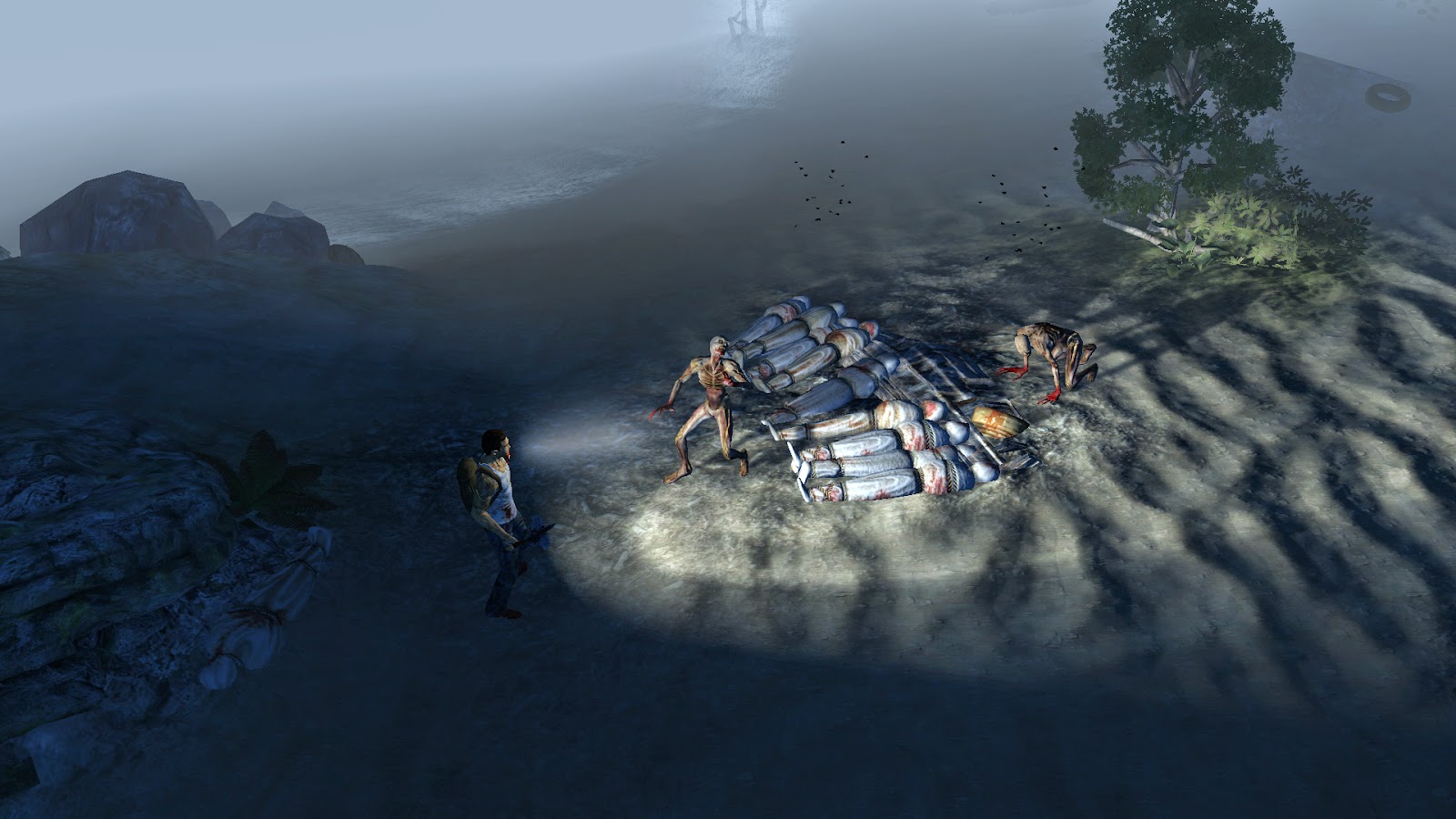 Sadly, water and rest resources never actually deplete; players can come back to the same source over and over again, and while they’ll need to shoot some more zombies each time, the “survival system” quickly degenerates into an excuse to force players to keep backtracking. Food resources are plentiful across each island, too. Sure you’ll need to engage in a spot of hunting, but the fact that my inventory filled up very quickly (during the tutorial, in fact) with things to eat and bottles of water should tell you just how arbitrary this survival mechanics are.

The way How To Survive handles weapons is, at first, fun. Each weapon needs to be built out of materials scavenged from what’s left lying about the place. In How To Survive it’s possible to make some truly impressive weaponry, which further kills the theme of survival, but as a dual-stick shooter it’s generally fun to build powerful weapons. Ammo is plentiful around the island too, so within the first could of hours How To Survive neatly transitions over to a straight action game, with barely a hint of atmosphere, and the fact that zombies don’t make for the most interesting targets in dual-stick shooters.

Dead Nation works as a dual stick shooter because it throws massive hordes of enemies at the player, from all angles, and then makes survival difficult under the weight of sheer numbers. But in How To Survive enemy hordes are fairly small, and they were clearly designed to be tougher to kill. But thanks to plentiful health packs, ammo, and weapon upgrades, these small groups of zombies are easy to dispatch without too much impact. 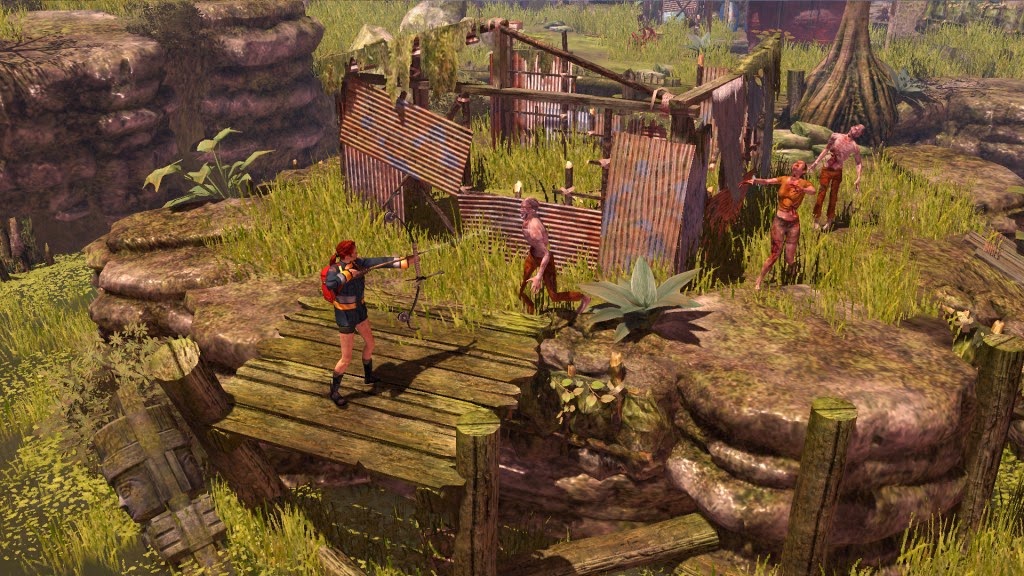 The developer, Eko Studio, also does a couple of really weird things that ruin that atmosphere in the game completely. Firstly, there’s a generous checkpoint system. If a monster kills the hero, for instance, players get to restart from, literally, a few seconds previous. If you look at the games that have respect as survival experiences; Klei Entertainment’s Don’t Starve, for instance, you’re looking at a game that doesn’t give players a second chance. Nothing builds suspense like hours of progress being threatened by permadeath. Mistakes in those games force players to start from the very beginning all over again. I had actually hoped this would be the case in How To Survive, but no, it’s a standard checkpoint-based game that eases any pressure that the mechanics and threadbare narrative work to build up.

The second error of Eko Studio was to include co-op gameplay. Co-op is great, of course, when it’s in a game like Dead Nation that is all about the action and high scores. In a game like How To Survive, however, it makes survival easier, and that’s the complete opposite for what a survival game should be trying to be.

The game does have a good sense of humour at first which is then sadly forgotten about. The tutorials are presented in a “how to survive a zombie apocalypse manual” fashion by a dude with the worst (and most amusing) faux-Russian accent ever. These tutorials are the first time in a game, ever, that I’ve been looking forward to encountering the next one. The zombies die in amusing fashions too; players that injure one enough have the opportunity to do a finishing move on it, and the sheer variety of these is gory good fun. Once the tutorials run thin and you start shooting enemies to kill them rather than attacking them in melee, the game’s humour largely disappears and you’re left with some fairly bland environments and dry supporting characters. 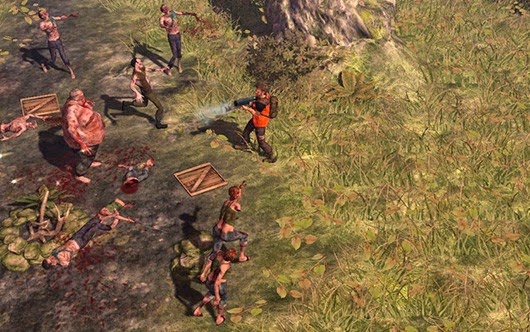 There is a RPG-style skill tree to work through by completing objectives and killing monsters too, and to the developer’s credit, this tree does play feel like a good sense of progression. It’s not as in-depth as something like Diablo, but each of the selectable characters have different skills to earn, and so as a pure grindfest RPG, How To Survive largely works on the Wii U courtesy of the general absence of other examples of the genre on the console.

But I can’t get over the fact that this is meant to be a survival game that doesn’t create a convincing argument for being a survival game. And because it compromises its vision, How To Survive is a fun game, but little more than that.