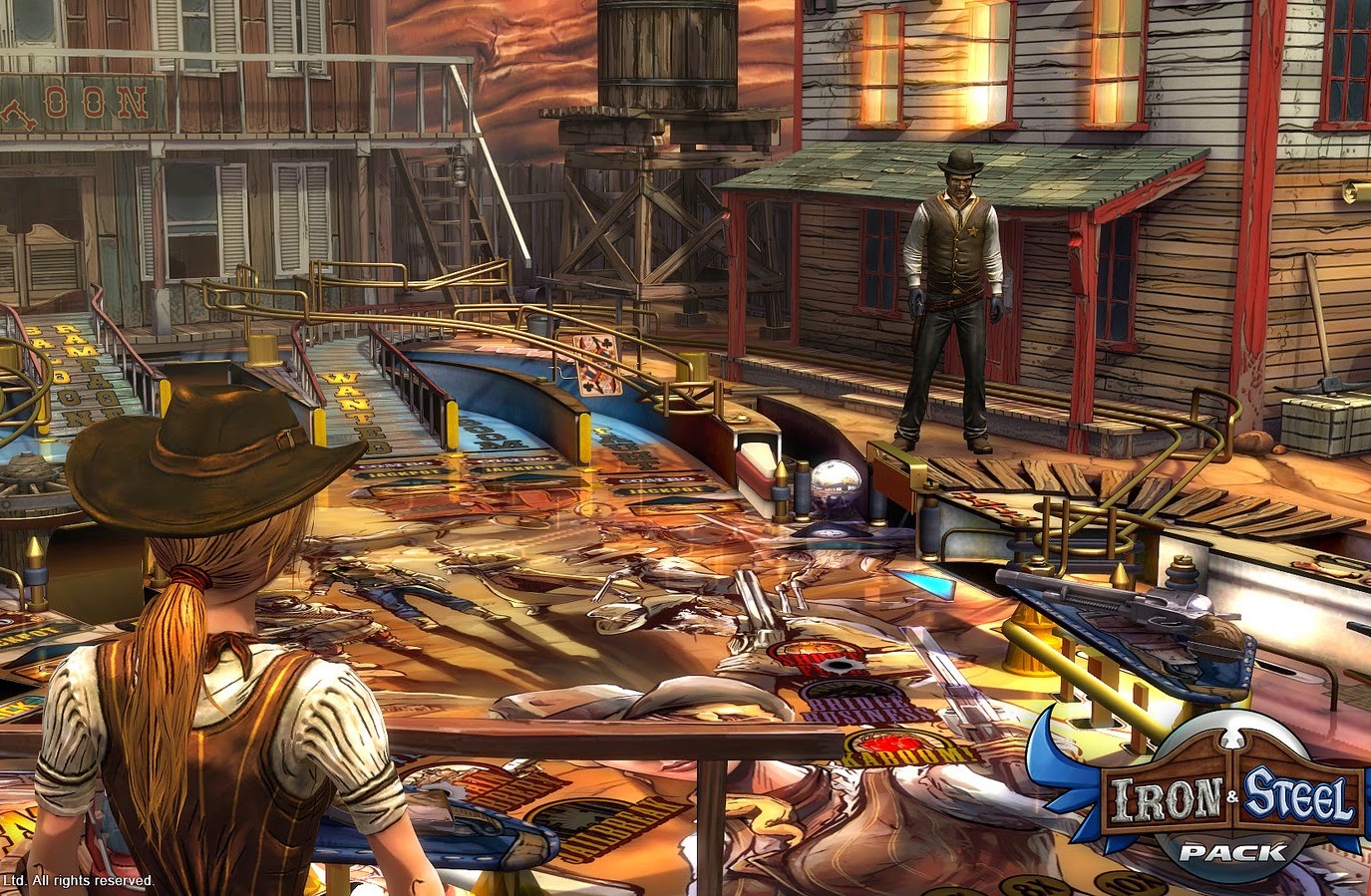 Zen Pinball 2 seems destined to hang around forever. Years after the original tables were released, Zen Studios can continued to support it with more tables in the form of DLC, with everything from licensed properties (Marvel, Star Wars, South Park) through to original creations. There are dozens tables in total now, and while some are certainly more enjoyable that others, for pinball fans life doesn’t get better than this.

Related reading: An interview from 2013 with the managing director of Zen Studios.

Iron & Steel is the newest pack of Zen Pinball 2 tables, and there are two of them; one is a fantasy romp through the world of CastleStorm, another popular Zen Studios IP. The other is a Wild West- themed table which is entirely original.

As it typical of Zen Studio’s work, these tables are for the most part the kind of experience that you would expect from a real pinball table. The ball rolls around the table with an entirely believable physics model – it lacks the slightest bit of weight in rolling down the table than you’d experience in a real pinball table, but that’s a minor difference at best and Zen Tables continue to be completely authentic experiences. 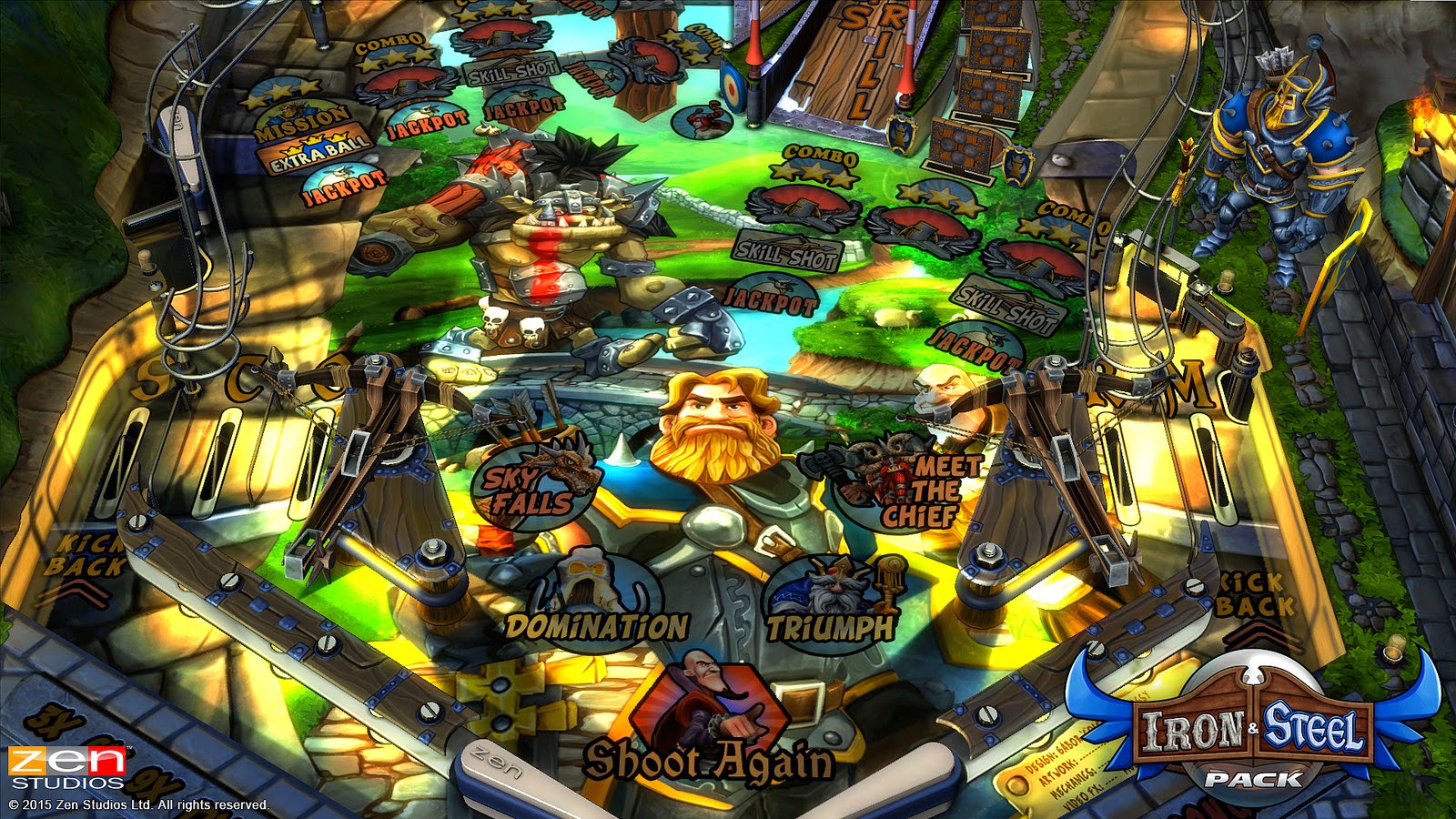 Mixed in with this authenticity however are all kinds of features that would be difficult and expensive, if not impossible, to design into a real pinball table. There are far (far) more moving parts in the tables, lending the tables a far more dynamic and exciting appearance. This might be due to a video game not requiring a repairman if a moving part breaks down, but it’s an advantage that Zen Tables have over their real world counterparts nonetheless.

Related reading: Our review of another collection of tables available as DLC in Zen Pinball 2.

And taken with the expert design of each table that shows superb abstract thinking (how do we interpret the Wild West using a ball, ramps, and flashing lights?), the Zen Pinball tables have always been far better representations of their given themes than you might see in pinball tables elsewhere.

CastleStorm is the weaker of the two tables in the new DLC pack. Not because it’s a badly designed table, but simply because CastleStorm has always been pitched as a humorous take on the medieval fantasy genre, and for that we already have another Zen table in Epic Quest, which is really quite brilliant and has a shop and equipment upgrade system that is more creative than the relatively straight forward table that this one offers.

Here’s a video of that one in action:

The Wild West table, meanwhile, is utterly brilliant. With an awesome themed soundtrack and a complex table design that takes a while to master, I suspect that this will be one that the more advanced Zen Pinball fans will get stuck right into because the leaderboards for it will be competitive – getting a high score in this one will take practice and expertise.

Here’s a video of that one in action:

If you’re new to Zen Pinball 2, then this DLC pack won’t be the most appealing, as it is more likely that the Star Wars and Marvel themed tables will be more attractive. But, once you’ve got all of those, these two tables do add even more value to the package.