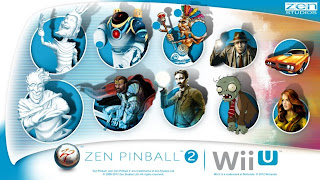 True story: Zen Pinball was the game that got me interested in pinball all over again. Where I could take or leave pinball beforehand, after playing Zen Studio’s flagship game and coming to realise the artistry behind developing a compelling pinball experience I am now a big fan of pinball games. I even play them when I see them in arcades or pubs, and am genuinely considering buying one for my home.

So it was inevitable that, despite already having experienced everything Zen Pinball 2 on the Wii U could offer on the PS3/ Vita, I was going to buy the tables all over again. The good news is that Wii U fans can now enjoy the finest pinball game out there. The bad news is that the Wii U version just isn’t as good.

We’ll start with the mundane, minor issues that the Wii U version encounters. First up? There’s not quite as many tables in this version. The Wii U is lacking a couple of licensed tables such as Street Fighter (no great loss there), and Ninja Gaiden (one of the finest tables of all). This would be fine if there was an exclusive table to compensate, but there isn’t. This is a case of first world problems, because with over 20 other tables to choose between it’s not like the Wii U version is lacking, but it is simply lacking in a direct comparison.

Our video review of the PS3/ Vita game

A bigger issue is that buying new tables is a real clunky mess, though it’s hard to blame Zen Studios for this when it’s very likely Nintendo’s infrastructure just isn’t optimised for freemium games. After the initial Zen Pinball 2 download, you’ll need to hop back into the eShop every time you want to buy a new table (or collection of tables). You’ll need to buy and download each of these individually and in two parts – you’ll need to download the demo, as well as the unlock key. Then you’ll need to install both before it will appear as a menu option back in the main game.

Until you buy the table it’s grayed out in the menu in the main game. With the PS3 and Vita version of the game you’re able to purchase and download the tables from this menu, but the Wii U version simply directs you to the eShop. Does it make for an inferior pinball experience? No, but when the rest of the game is so slick, and when the other versions of the game nail the purchasing experience, it’s hard to think of the Wii U version as anything more than the lesser cousin. 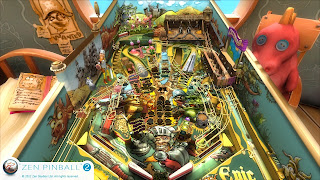 However, the main issue with the game on the Wii U is that it is ever-so-slightly inferior in terms of playing pinball too. On the TV it looks and plays the same as when I play Zen Pinball 2 on my PS3. The gamepad fits comfortably for long periods of mashing the bumper buttons. The gamepad screen itself isn’t used in any meaningful way, but you’re not going to have the time to look at it anyway.

Where the game experience falls down generally compared to the PS3 version of Zen Pinball 2 is when you move the game from the TV screen to the gamepad. It works smoothly and comfortably, but the gamepad’s screen is not quite up to the fidelity of the Vita screen, which is cross compatible with the PS3 version. With Zen Pinball 2 on the PS3 if I buy a table I can also download it to my Vita for free and both versions share my high scores. It looks better on the Vita than it does on the Wii U, and it’s also significantly more portable.

Given that pinball works so well when its portable, it is a little disappointing that the Wii U and Nintendo 3DS can’t talk and share data. And, because I have some pretty impressive scores on my PlayStation version I don’t really feel the need to work to earn them again on the Wii U game. The relative lack of a community with the Wii U version at this stage makes the social leaderboards less interesting, too.

These are all minor complaints in the grand scheme of things, and I’ll point to my video review of Zen Pinball 2 on the PS3, as the experience is much the same on the Wii U. It’s still the finest pinball game out there, it’s just not the best version of it.

– Matt S
Find me on Twitter: @digitallydownld
Find me on MiiVerse: WaltzIT

Giana Sisters flip the script on PSN and XBLA