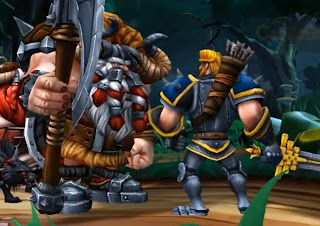 CastleStorm bustles with energy, creativity, and humour. It combines Zen Studios’ impeccable sense of aesthetics with a combination of some of the most popular gameplay systems that we’ve seen in recent years. There’s a bit of Angry Birds in there, as well as some button-mashing action and a touch of tower defense.

It’s all good. In fact, the biggest criticism that can be leveled at the game is that it doesn’t give players the time to appreciate it.

There are three different kinds of game in CastleStorm, and players will need to manage all three simultaneously. First up is the Angry Birds-style ballista and catapult shooting. Players can control a range of different missile firing systems to lob arrows, explosive apples, and weirder at the enemy soldiers and castle. One of the ways to win a level is to destroy a significant percentage of the enemy’s castle, and so paying close attention to this side of the game is essential. 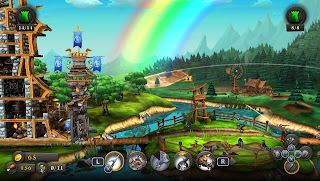 Aiming is done manually and the projectiles follow a firing arc that can be adjusted on the fly. On the home consoles this is comfortable and intuitive, but on the Vita the screen is small and fine aiming is a little challenging in the heat of battle.

This is compounded by the fact that players will often need to switch over to the RTS element of the game. Players can summon a range of soldiers to take on the enemy by foot. A second way to win the level is to knock down the castle gate, grab a flag, and get it back to your base, and it’s not going to be enough to shoot catapult shots at the enemy swarms. A strong defense made up of a range of unit types is critical, though it’s also fun to know that it’s possible to go on the offense if you start getting an advantage in the foot battles.

The third system at work is the magic system, and critically, the spell that allows you to summon the “hero” to the battlefield. Doing this gives you direct control over a very powerful character that can mow through enemy hordes, but at the risk of his own health. And, of course, when doing the fight personally the player’s attention is going to be pulled away from what’s happening in the broader battle, and for all they know their walls could be crumbling while they are bopping goons on the head. 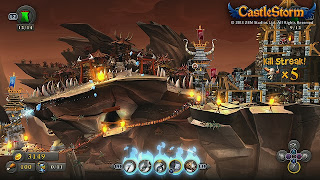 So there’s a lot to manage in this game, and to be perfectly honest, it’s almost overwhelming. Even with plenty of practice there is no room to breathe in executing the necessary strategies to overcome some surprisingly-tough enemies. Some will enjoy the intensity, while others will find the whole experience a little too intense for its own good.

There’s also an issue with CastleStorm encouraging a little too much grinding for its own good. Everything, from ballistae to soldiers and magic spells can be leveled up using the in-game currency. The problem is that the enemies scale in difficulty quite quickly, and I found myself having to replay levels quite a few times to have the right mix of experience levels to handle them.

But that’s a minor complaint in the grand scheme of things. I haven’t even mentioned the excellent online play or the ability to customise your castle between battles to tweak your combat abilities; it’s a rich, fully-featured game that is more than capable of providing dozens of hours of value for the small asking price. The only challenge players will face is understanding from the outset that this isn’t necessarily a relaxing game to play, and so it’s probably best enjoyed in short bursts.

The indie development bubble; when will it burst?

Interview: Slitherine Director on the trials and opportunities for niche publishers