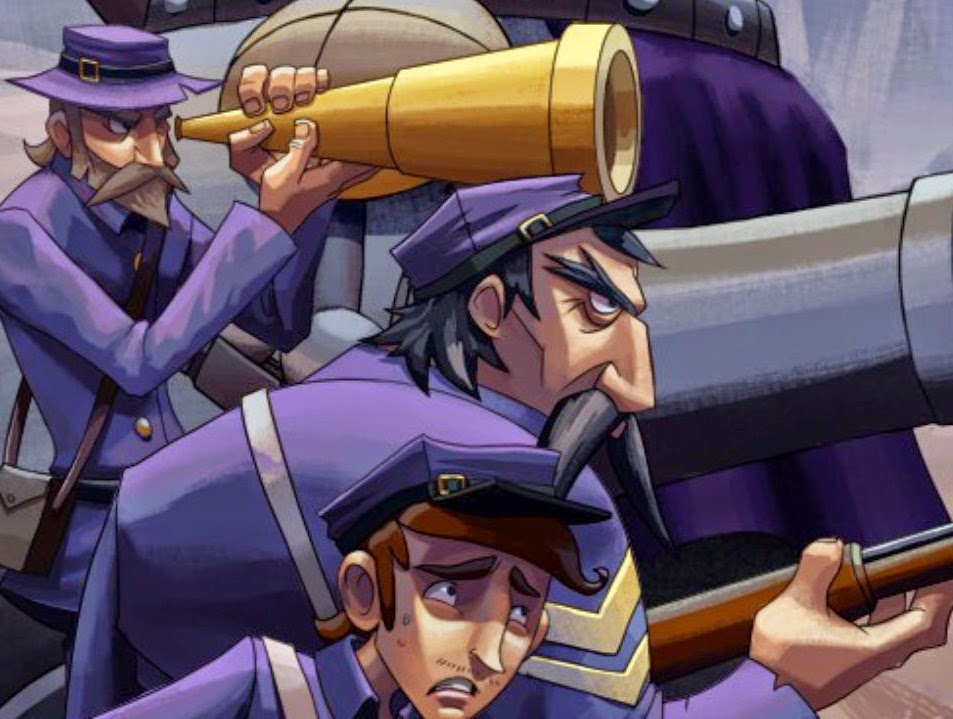 Game like Ironclad Tactics are a dime a dozen on mobile platforms. Billing itself as a “strategy game,” Ironclad Tactics is really a casual semi-turn based experience that is briefly diverting, but it’s hardly the kind of thing that you’re going to sit down for and play for hours at a time.

Each level in this game is split into a sequence of rows, and you’ll need to command units to take them from one side of the field to the other. There’s a timer in the corner of the interface that counts down, with units making movements on regular intervals, and in between movements you’re able to load them up with weapons or other boosts.

The only movement or action that units will do by themselves is to progress directly across whatever line it is you’ve placed them on, but you’ve also got access to a hand of cards that give you the ability to give units weapons, move them on to a different line on the field, and so on. This deck of cards is built up like in a CCG – in every level that you complete you’ll get access to new cards, and then you’ll need to form the ideal deck of 30 to suit your strategy. Ironclad Tactics doesn’t ask for players to spend money on microtransactions for additional decks of cards – everything you need is provided from within the game. The problem is that it’s not especially well balanced. I’m an experienced CCG player, and I’ve never struggled as much as I have with my deck of cards in this game. Too many cards are worthless unless other cards are already on the virtual table, and even then the cards tend to be too expensive to execute on complex strategies that would require multiple cards to be played at the same time. 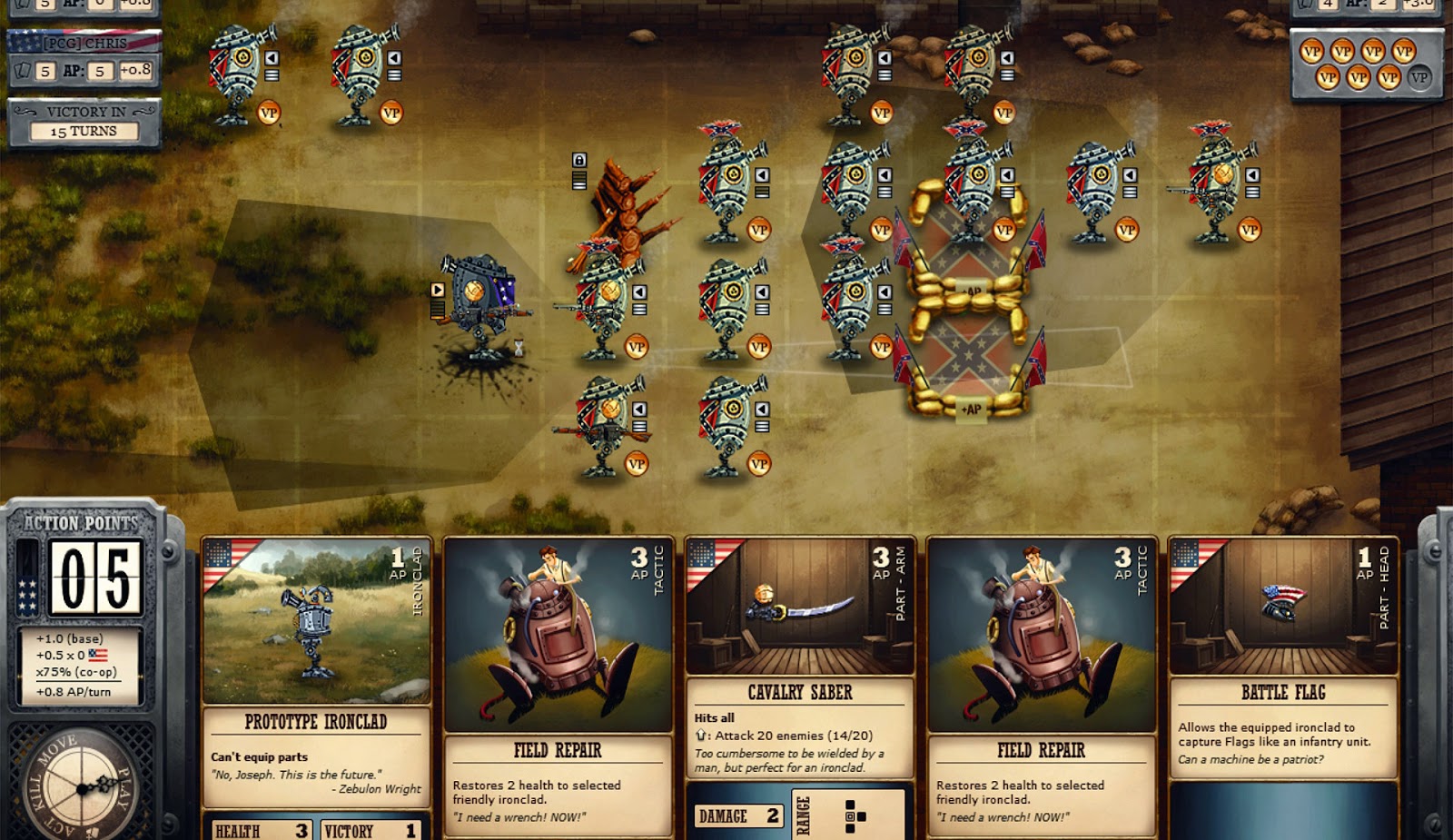 As a result Ironclad Tactics tends to devolve into a game where you simply send out the best of whatever you can afford to counter the best of whatever your opponent can afford. There’s little room for building unique and strategic decks – you’ll get by fine by throwing the best cards you have access to into the deck. I compare to the complexity of a game like Natural Doctrine, which featured a complex deck building game in the multiplayer mode alone, and it’s difficult to really get into the gameplay that this offers, especially given the reasonably high asking price.

The game does offer a lengthy campaign (complete with co-op action), but this is let down too. Beyond the overly simplified gameplay this release suffers from some terrible storytelling. It’s presented through nicely drawn comic book-style panels, but the characters are universally bland and I found myself losing interest in the opening act.

And that’s a real pity, because the actual concept of Ironclad Tactics is cool stuff. Set during the American Civil War in an alternate history where primitive war machines were taking to the battlefield, there is a genuinely compelling opportunity there to do something stylish. However primitive art style and generally uninteresting character design put an immediate stop to that potential. 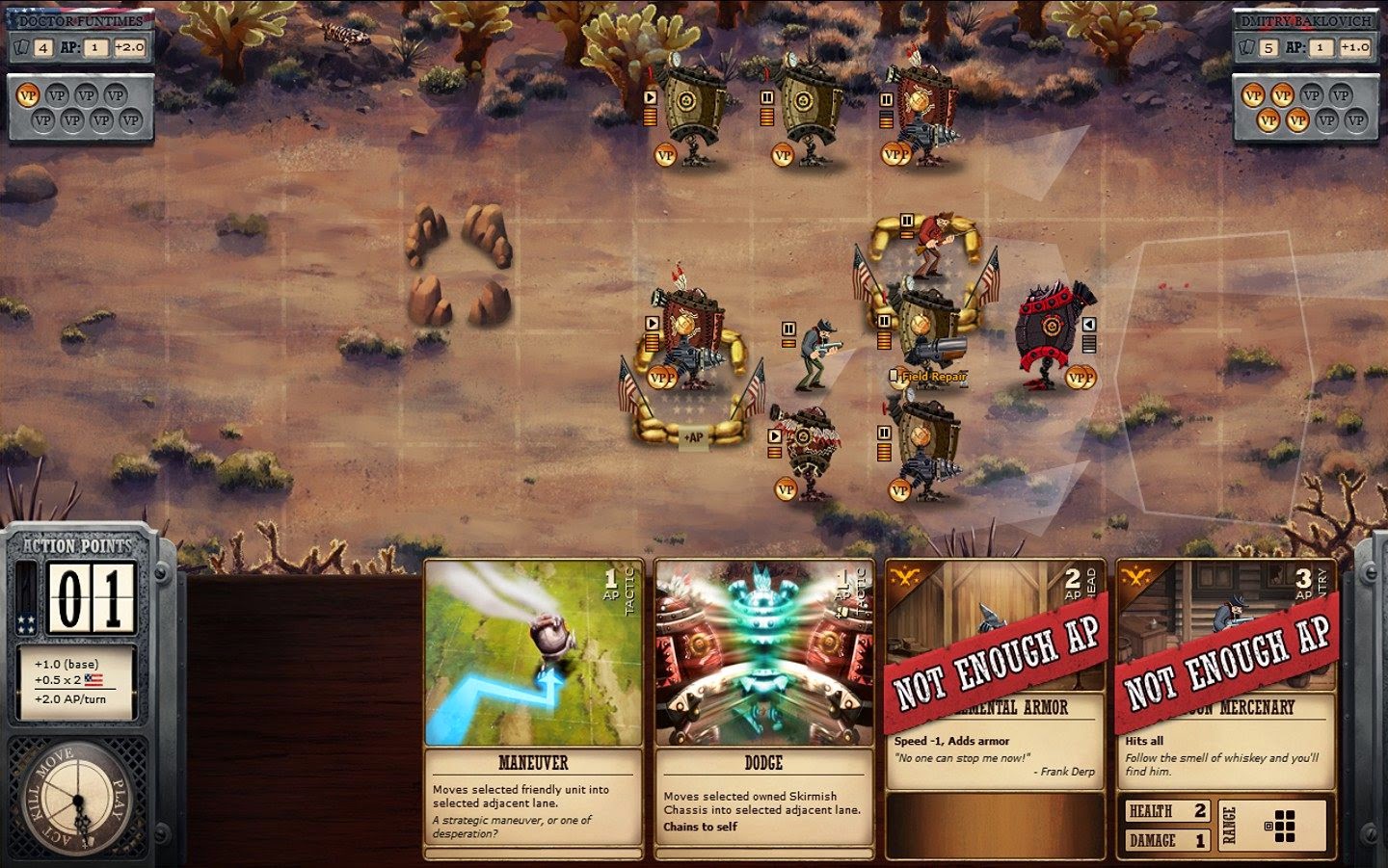 There’s a place for these kinds of simplified tactics games, and there have been plenty over the years; be that tower defence games right through to the likes of Chain Chronicle. Unfortunately a lack of personality and gameplay that doesn’t live up to its promises have left Ironclad Tactics dead in the water.