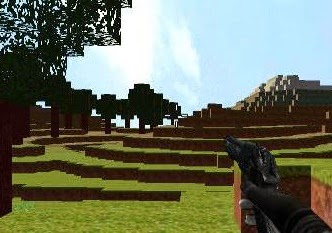 The basic idea of this game is to travel from place to place in a procedurally-generated world rescuing inhabitants from the attacks of ants. Yes. Ants. Unlike in Minecraft, where you’re encouraged to build elaborate structures to inhabit, and then mine deep for precious resources and the like, in Battle Miner you’re too busy travelling to settle in one region – once you’re rescued one blocky dude from blocky ants you move on to the next one. Thanks to this structure the most you’ll ever be doing is constructing small, temporary shelters to hide away from the more vicious ants that come out at night, and the deepest you’ll be digging is a handful of blocks to find the rarer materials. 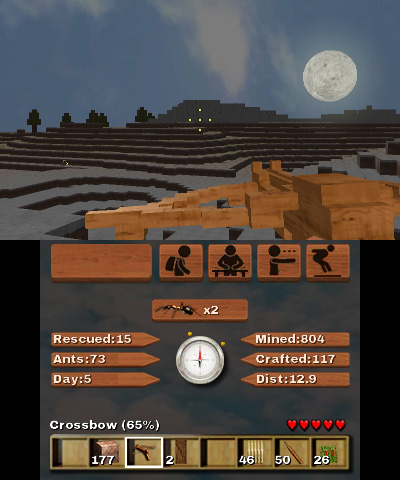 Those rare materials can be used to upgrade the various weapons that you’ll be using to kill the ants. There’s guns, grenades and all the good stuff. The problem is that as a first person shooter, Battle Miner is unforgivably deficient. Aiming is a nightmare as it uses the face buttons which immediately makes any kind of fine or precise aiming impossible. Why the developer thought this would be a good idea when there’s a touch screen that could be used for aiming to a far better level of accuracy is beyond me.

These horrible controls are made slightly less intolerable thanks to the woeful enemy AI, which must be the poorest excuse for AI that I’ve ever seen. Enemies run around in crazy, random circles, and can easily be exploited to easily defeat. In fact, the only time I found myself in trouble was when the controls let me down.

The game’s mining is hardly engaging stuff either. With little need or incentive to build structures there’s precious few blocks that aren’t used in some way to build or enhance weapons. Weapons that, as I just previously described, are hardly enjoyable to use. With so little else to construct and develop there’s never a sense that the world of Battle Miner grows around you. If there was some kind of narrative that made the travel to rescue each new block dude something to look forward to, then Battle Miner would still have some kind of merit to it. It does get certain aesthetic touches right (Minecraft blockiness in 3D is gorgeous), and the soundtrack is gorgeous, being vaguely reminiscent of the Elder Scrolls series. 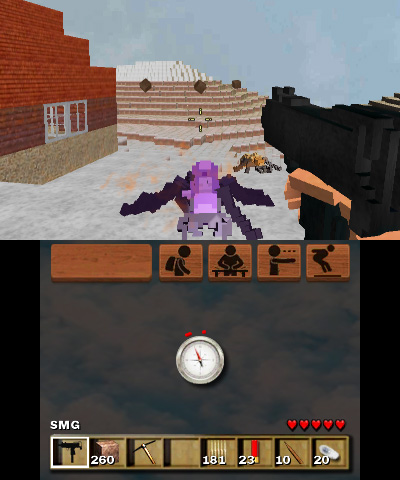 But the narrative of Battle Miner is not good. Oh no. It’s not even present. It’s a game that wants to pretend that it’s narrative driven, but there is not a single line of narrative or character in this game that is memorable. You’ll rescue a blocky dude, and he’ll say “yay, thanks, here’s some loot, go rescue someone else!” And, while I’m paraphrasing there, it’s only slight.

There are examples out there of people taking the basic idea of Minecraft (procedural worlds that excite the imagination by being genuinely limited) and do something unique with it. Malevolence, for example. Towncraft, for another. But Battle Miner is an example of what happens when a developer takes Minecraft and clones it in such a manner that is loses everything that made it something special in the first place.

Looking for a game to play? 2,400 DOS games were just made browser compatible and free