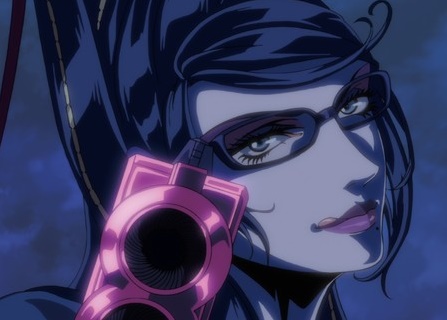 While it was a superb action game in its own right, what made Bayonetta 2 such a stand out experience was the quality of its narrative. As much as people debate over whether it in an example of exploitation or social criticism, Bayonetta 2 was deftly written, with a stand out, memorable character and a fantasy world that just begs for more detail to be added in through additional sequels and spin-offs. I’ve got my fingers crossed for an epic JRPG, personally.

Related reading: Our review of Bayonetta 2 on the Nintendo Wii U

While I wait for that, I can appreciate Bayonetta: Bloody Fate. A feature-length anime that runs parallel to the events of the first game (sitting somewhere between a direct re-telling and a ‘inspired by’ remake), Bloody Fate features just about everything that you’d expect for one giant Bayonetta cut scene – fast, brutal action, plenty of crotch and almost-nude shots, and character development that almost exclusively spins around Bayonetta’s sarcastic wit. 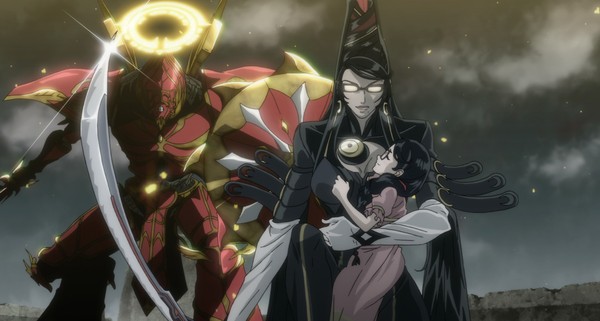 As with the games there’s a fascinating reversal of morality in the battle between heaven and hell that all Bayonetta stories use as their core. The angels of Bayonetta are grotesque monstrosities shown to be devoid of emotion, empathy, or the desire to protect the weak that we’re so used to in stories about them. Their motivations can’t truly be called “evil,” since there is a sincerity to impose a kind of utopia on the world, but there is a Machiavellian authoritarianism to the behaviour of the site sitting on the side of heaven that we’re immediately drawn to celebrate as Bayonetta inevitably fends them off. (As a side not, there’s never really the sense that this woman could be put down by any force, earthly or heavenly, and that’s a refreshing change from the anime trope where characters are bloodied, but come back from the brink of defeat).

Bayonetta is a force for chaos and the forces of hell that she works for are clearly not a friendly, wholesome bunch of spirits. But in doing her work we’re led to understand that she maintains an equilibrium from the world being dominated by the uncaring angelic forces. Furthermore, it is Bayonetta that demonstrates a maternal instinct in Bloody Fate, effectively adopting a child and then working to ensure her safety. There are more than a few shades of Ripley from the Alien franchise in the way that Bayonetta interacts with people who are not there for her to kill. Bayonetta is sharper, sexier and replaces gritty determination with an excess in confidence, but there is that same sense of a character that is empowered through her femininity, as opposed to a man-in-woman’s-body or a character that is empowered despite being a female. 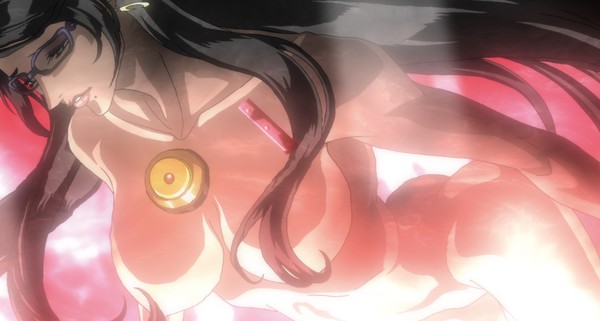 While Bayonetta’s character does incredibly well in Bloody Fate, and demonstrates that the character can form part of a broader media franchise and cross over into anime, and perhaps even film, there are some weaknesses in this anime that do pull it back from the greatness of the games. There’s a time travel moment in the story, which brings with it all the narrative weaknesses of time travel narratives (though it must be said that Bloody Fate handless the paradox far better than some other notable sci-fi movies out there). And, while the voice cast from the first game all return, Bayonetta’s character (voiced by Hellena Taylor), is wonderful, but the rest of the cast are not really up for the task of voicing their characters for something more sustained than a game.

Related reading: For a more in-depth discussion on the topic of Bayonetta 2 and gender, here’s an opinion piece written on the subject.

Supported by a vivid art style and slick animation, Bloody Fate may be a little late to this market (it was released in Japan well before Bayonetta 2 was a thing), but it is an excellent alternative to playing through the game each time you want to work through the original Bayonetta story. And since it’s a story that’s worth experiencing multiple times, that makes Bloody Fate very convenient.

The Australian games industry in 2015; why consoles are the big opportunity