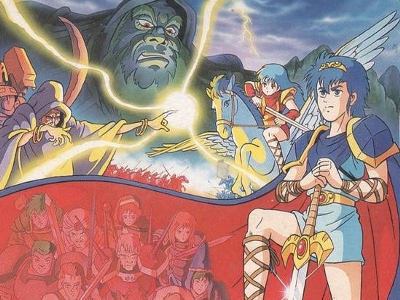 Fire Emblem turning twenty five years old doesn’t have the impact that it should here. Western fans have missed out on at least seven games over the years so the sheer lineage of Intelligent Systems’ console strategy franchise is lost outside Japan until the magical day when Nintendo deems retro localisations profitable. If you happen to have access to the Japanese eShop, however, there’s a library of classic downloadable Fire Emblem greatness already available at your fingertips for dirt cheap.
One such game is Fire Emblem: Ankoku Ryū to Hikari no Tsurugi (or Shadow Dragon and the Blade of Light), a title the most casual of fans will identify as “the one with Marth” given a couple key screenshots. With a promising future on the horizon in the form of Fire Emblem if and a Shin Megami Tensei crossover (which is totally still in development [no it isn’t. I’m calling that now – ed]), it’s worth giving the title that spawned it all a second look.
That this game has been remade twice and seen a sequel of sorts is surely a testament to its warm reception, but the million yen question is whether the original game’s dated mechanics still hold up today. And (spoiler alert) they do. Ankoku Ryū to Hikari no Tsurugi no doubt lacks the modern trimmings of Fire Emblem Awakening like a world map, marriage system, and customisable characters, but the core experience is intact all these years later and boy is it still entertaining.
To reiterate, this game is basic through and through. Story sequences are concise affairs yet achieve the bare minimum in establishing context for the bloodshed. You won’t be enamoured by the personality of one soldier over another, especially given that they’re all so down to business, but there’s ample material to draw players into each conflict on a surface level. 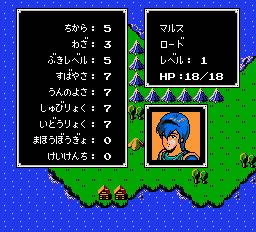 Combat too takes the minimalist approach and this is for the better. Advanced tactics like rescuing units are off the table and this means that, since options are sparse, you have to fully commit to all your choices. The lack of truly in-depth options paves the way for the groundwork to shine; terrain usage, character recruitment, and item management all feel like more vital factors than they would later become.
The game swaps from short plot sequence to battle map on a dime but there’s enough maintain interest until the closing hours. This is one of the longest NES/Famicom games out there but charming sprite-based combat scenes and a downright iconic soundtrack do their part to keep the presentation interesting.
Despite being fundamentally limited, that isn’t what lets Ankoku Ryū to Hikari no Tsurugi down. Instead it is crippled by the speed at which conflicts play out. Is real world warfare conducted at the pace of a Formula 1 race? No, but the sluggish interface, animation speeds, and computer opponent’s contemplative movement mean a map that would take five minutes in a later entry becomes a half hour event. The movement system is also rather clumsy compared to subsequent entries; rather than being shown the range of all your possible movements and attack range, you’re expected to determine it for yourself every time which makes planning for enemy attacks a strenuous task as a result. 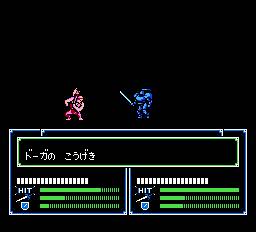 Conversely, the reduced tempo does add a certain weight to failure. As usual, if one of your characters dies in a map, they’re gone for the rest of the game. Here however, the consequences of losing a character are even higher because your time is at stake and walking out of combat unscathed for the entire game is going to be arduous indeed. It’s just a shame that there aren’t any support conversations in this game (optional scenes between characters used to establish or solidify their personalities and relationships), meaning you won’t feel as much of a sting when your brother in arms falls to the lance of mortality.
As for how well the game lends itself to being imported, it’s incredibly easy if you’ve played an entry in the series before. Monolingual English readers will note that menu items are in the expected spots and may well make it to the final chapter with raw instinct (though there are countless readily available online guides if you’re looking for legitimate control over your movements). If you’ve got barebones knowledge of katakana and hiragana, you’ll go far since the scripts of most Famicom games are devoid of kanji and this grants you the ability to quickly memorise unit names and key terminology.
All that being said, this isn’t the place to start the franchise. Unless you’re confident in your vocabulary, you’ll be struggling to learn the rules of the game and, in conjunction with the language barrier, there’s every chance you’ll render your save file virtually unbeatable through a series of unknowingly poor decisions. And from there the only option is to start the game again from scratch. 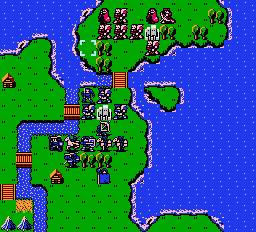 And it is worth noting that there was a Nintendo DS remake of this game released in small quantities in English. It might be difficult to track a copy down, but because it’s a DS game it’s not region locked and you can play your copy anywhere in the world. It’s a very different experience thanks to tremendous updating and alterations but it’s definitely worth checking out as well.

Fire Emblem: Ankoku Ryū to Hikari no Tsurugi is the blueprint for a terrific strategy franchise and still an enjoyable experience in its own right. Mandatory patience means you’re going to need an iron will to see it through to the end and later entries are no doubt superior, but Prince Marth’s first adventure is more fun than just a history lesson.