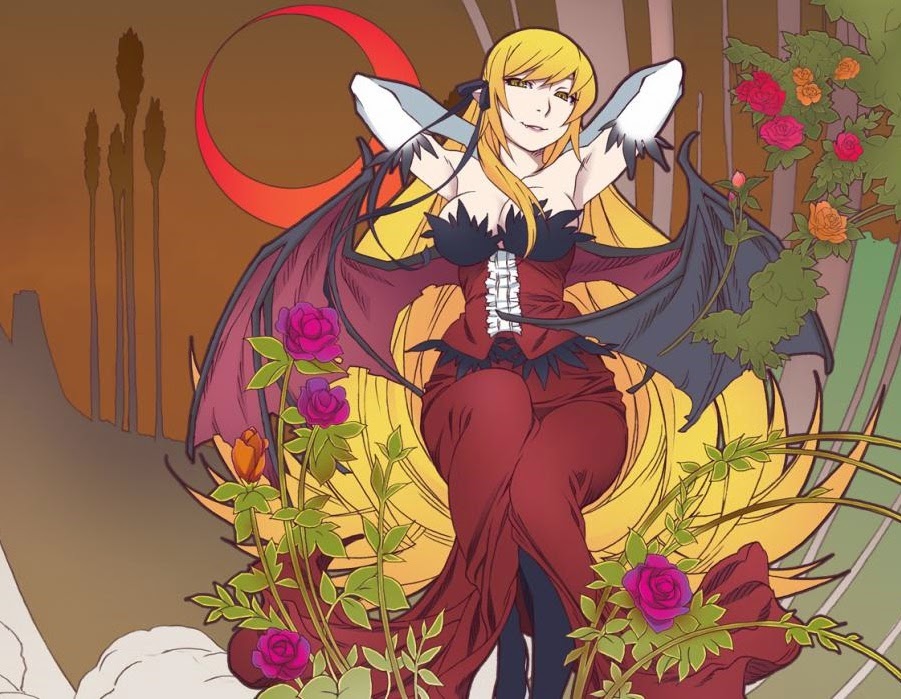 I’ve reviewed a couple of the Monogatari series now, and I’m a big fan of the way the series manages to mix philosophy, wordplay, and extreme fan service together in a way that is refreshingly unique for anime, and quite striking. It’s not just the visual style of the anime that is so impressive (though the avant garde aesthetic style is certainly impressive), but it’s the way this franchise has been able to get me thinking unlike any other that I have appreciated so much across multiple series.

Each series of Monogatari seems to take on a different concept or school of thought, and then develop it into a weird mystical fantasy that exists more to provide metaphor than to offer the opportunity for action or drama. With Onimonogatari that trend continues, and I’m glad the season is only four episodes long, because the theme of this one makes my head hurt when I start thinking about it (in a good way). Onimonogatari tackles existentialism, and existentialism is, at least the way my brain is wired, the most difficult school of philosophical thought to wrap my head around. 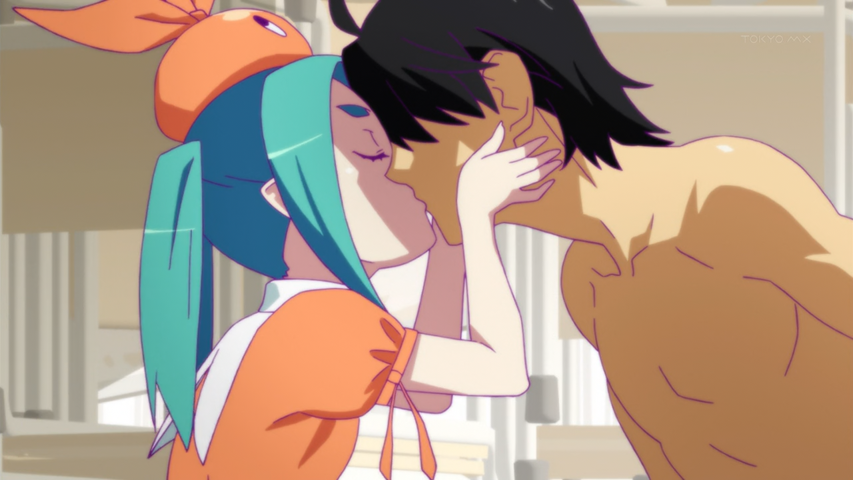 As such I found myself all kinds of confused by the conclusion of this narrative arc, but I’m sure as I reflect on it further I will start to puzzle it through, and that has always been the greatest strength of the franchse – it makes me think well after I’ve turned the Blu-Ray player off. The basic narrative is straightforward enough – the series’ main man, Araragi, finds himself and ghostly schoolgirl, Mayoi, being chased by an unknowable, indefinite void. Neither know what this void is, but both feel terror simply by being in its presence. They escape thanks to the help of a third character, the myseterious Yotsugi, and then a fourth, the vampiric Shinoubu shows up. They then sit around and try and figure out what this void is, and while I’m not going to give spoilers away, the conclusion they come to is a little depressing… or it isn’t, depending on how it sits in with your understanding of existential thinking.

Related reading: Another great series from Shaft is Ef – A Tale of Memories

There’s also an extended side narrative that further fleshes out Shinoubu’s history and character and helps to contextualise the existentialist discussions going on within it. As you can probably guess given that the characters in this series include an effectively immortal vampire and a spirit, the existential thought puzzles around the meaning of existence go into some crazy places, and coupled with the franchises’ traditional scattershot dialogue and hyper-speed ‘camera’ cuts and visual density, Onimonogatari is an incredibly difficult narrative to understand, even though very little actually happens within it. If you are looking to properly understand what is going on, I hope you’re read up on your Sartre and Kierkegaard. 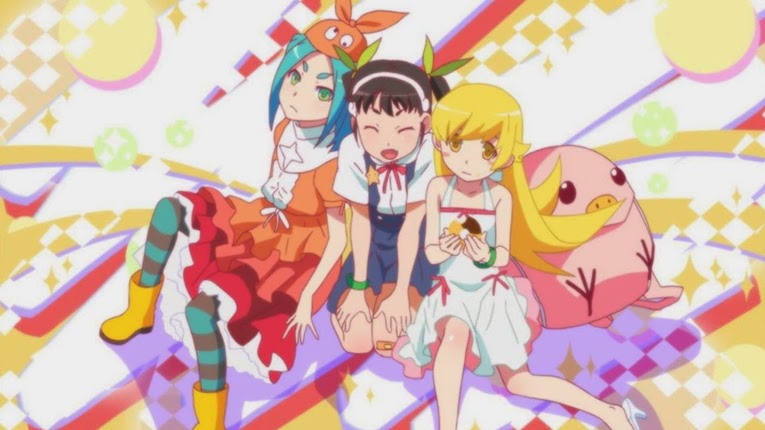 Beyond the philosophy, the other most renowned side of the Monogatari franchise has always been its… unique… approach to sex themes. It is, of course, passed off as “fanservice” in the eyes of most critics without the slightest hint of understanding why the content might be in there, but the reality is that it’s a rare moment when a Monogatari episode isn’t making a statement with its sexy moments. Yes, even the tooth brushing scene. But Onimonogatari scales all of that right back. Some racy humour and a couple of kisses aside, it’s almost innocent, and while what there is is often uncomfortable, given that the girls that are the centre of this arc are the youngest of all (in terms of apperence, anyway), I would happily argue that this is the least explicit of the Monogatari series to date.

As with all anime produced by Shaft, Onimonogatari is a feast for the eyes, with each of the artists that work for the company having a clear eye for the abstract and surreal. There is a permanent haze to the art style that lends the Onimonogatari a dreamlike quality, a befitting visual theme for the dreamlike quality to the thinking behind the series, and buried within that is also a nostalgia for Japan – the various environments and settings on display positively glimmer with a respect for the unique aesthetics of the country.

We’re at the point now where you’ve got not chance of understanding what is going on unless you’ve seen at least some of the previous Monogatari story arcs, but Onimonogatari is a good one if you have. It’s short and intense, with all the traditional intelligence and philosophical depth that the the franchise is well known for.

This Blu-Ray can be purchased from Hanabee Entertainment in Australia

Last chance! Win a copy of Atelier Ayesha Plus and/ or Akiba’s Trip on PlayStation 4!