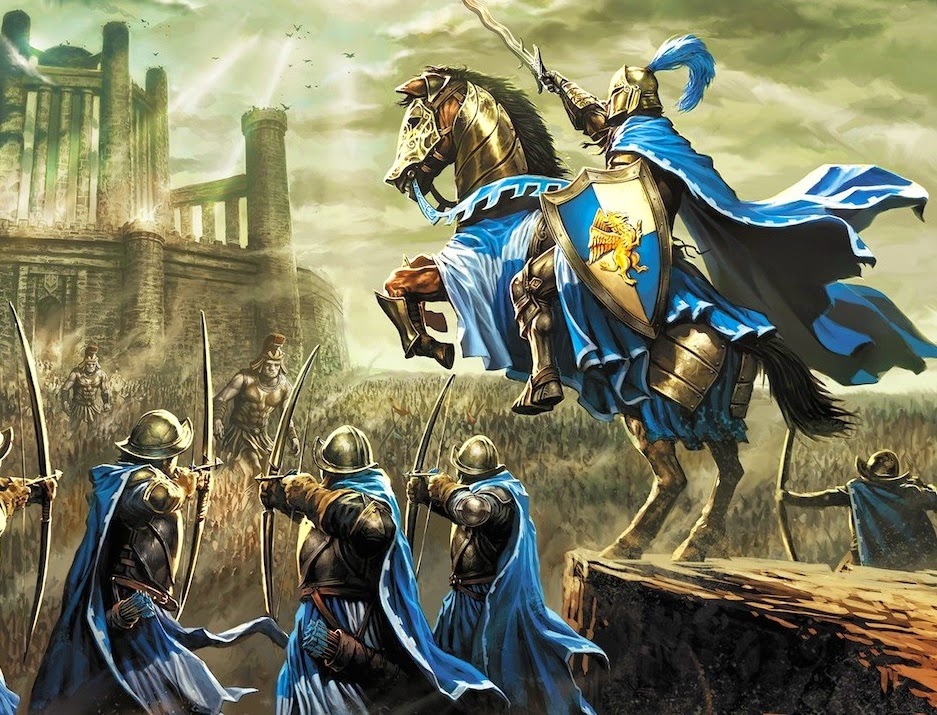 I never owned a Heroes of Might & Magic PC game when I was a child. But I was a massive fan of the franchise from the moment I played it for the first time on the computer of a good friend of mine (the first one was released in 1995, when I was 12). I have fond memories of marathon, all-night sessions with that game (and then my friend would come over and we’d do the same thing on my PC with Civilization 2).

But I didn’t own my own copy of a Heroes game before it was ported to the Nintendo Game Boy Color in 2000. Boy did I play that game to death. I would be squinting at that tiny, grainy screen as the dawn came up more mornings than I care to admit. I had memorised every map, every event, and every monster and character statistic. I still have the cartridge buried somewhere with my other childhood memories, but I’m sure the savegame battery will be dead now from the sheer stress I placed it under all those years ago. 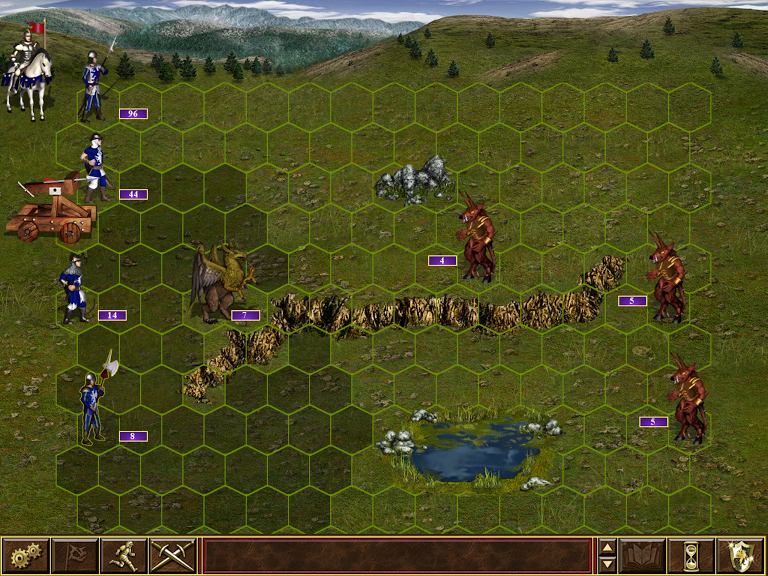 In that context it is probably no surprise that I have come to associate the franchise with handheld, portable gaming, even though it is a very dominant PC franchise. And this in turn is why I was so excited to find that not only was there a re-release of Heroes of Might & Magic III on the way for PCs, but it would also be coming to the Apple iPad. Finally I would have a new portable Heroes of Might & Magic game to get stuck into. And the good news for me (and anyone who has fond memories of this game and franchise) is that the game is as playable now as the Heroes series has ever been. These games have aged incredibly well.

Ported by DotEmu, there’s been very little done with the game itself. Despite touting that it is a “HD remake,” it’s not the most impressive looking game, with very simple (and simply animated) sprites that might be in better resolution now than their original form, but are hardly what you would call modern. Maps are of a similar simplicity, with bold colours and a simple tile design that is a carry-over from the original game.

But the visual aesthetic was never important to Heroes of Might & Magic. What is important is the RPG/ turn based strategy hybrid action, and as I previously said, it holds up as well today as it did all those years ago. In each game you’ll start out with one low-level hero, and a tiny group of soldiers under his or her command. By building up towns that are in your possession you’ll be able to recruit new fighters to join the cause, and by building new structures or upgrading existing ones, you’re also able to upgrade the power of the units that you can recruit. 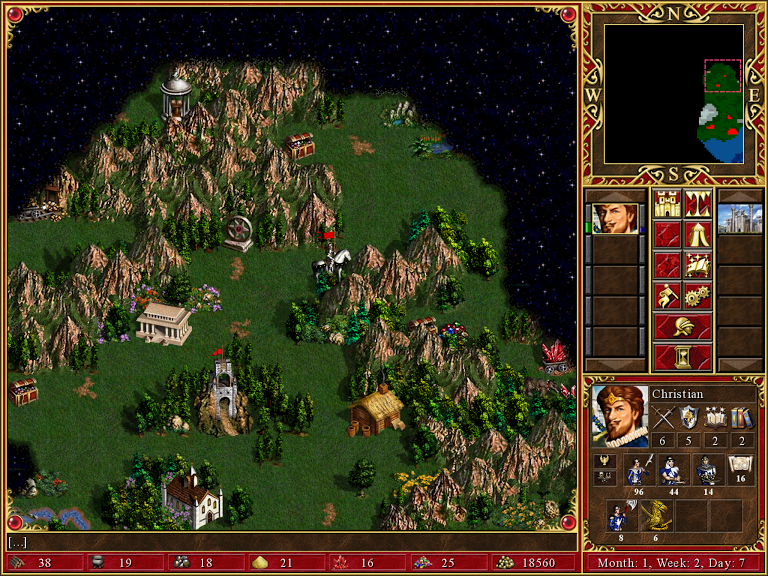 Then you’ll send this hero out into the map to both combat against AI opponents, who command armies of their own, and squads of wild creatures and unaffiliated units of soldiers. These need to be defeated not because they’re a threat to your own empire, but rather because they are generally guarding treasure or resource-generating mines that provide the resources you’ll need to build and upgrade a large enough army to properly decimate your opponents.

When combat is joined, the game shifts to a large grid of hexagons, where units will be arrayed on opposite sides of the field. You’ll then take turns with your opponent to move one unit at a time, chess-style, for either ranged or hand-to-hand combat. Units have a host of different statistics that determine how fast and far they move, and how much damage they do. The strategy in these combat sequences are simple, with no need to manage flanking or terrain rules, but timing movements well, and making good use of the magical resources that the heroes themselves have access to can turn a slight numbers disadvantage to a win.

As the game goes on, you’re able to recruit more heroes, who can in turn recruit armies of their own. Scattered around the maps are magical items which power up your heroes. You’ll likely acquire additional towns, giving your armies access to a greater range of units, as there are a wide range of species available for recruit, and the humand soldiers will have different statistics to the orc hordes, and having a mix of both offers you greater survivability in combat. On the other hand, the enemies will power up in kind. 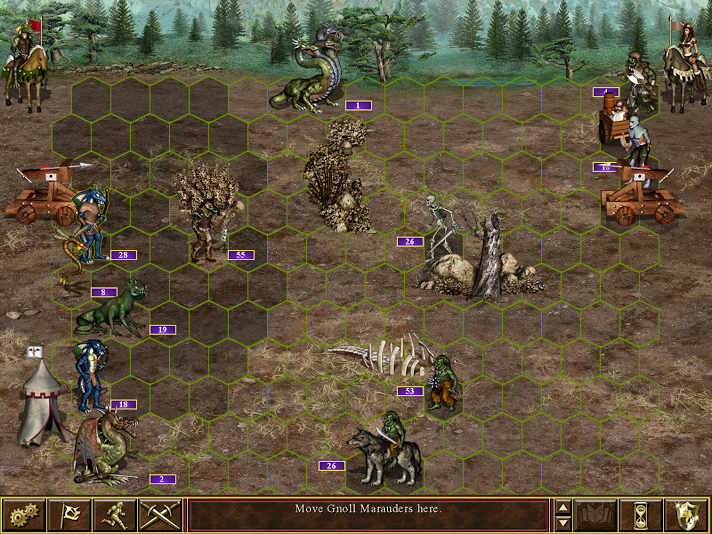 The start of each game of Heroes of Might & Magic starts out simply enough, but managing all of this towards the end of the game becomes a complex series of careful strategic decisions. Heroes of Might & Magic III knows how to be difficult, with even the lowest difficulty levels punishing the unwary, and it was actually a nice kick of nostalgia to play a strategy game with such an arbitrary approach to difficulty – I failed more than a couple of times but that simply inspired me to get up and try again, because I knew I wasn’t being beaten by the AI, but rather I was simply making the wrong decisions mayself, and therefore leaving myself underpowered.

The main way to play is the campaign, which is a series of linked scenarios where progress from one scenario moves over to the next one. It’s also possible to play one of 50 individual scenarios, and these range from small maps right through to mammoth ones that will kill a weekend all on their own. The sheer amount of content in Heroes of Might & Magic III is incredible, and while everyone will have favourite maps and maps they can’t stand, what can be guaranteed is that everyone will find enough in here to do to many times over justify the asking price. There’s even multiplayer, though it’s local multiplayer only. Mind you, if you’re on a long flight or watching TV with someone, the pass-and-play nature of the iPad works really well for local multiplayer.

Sadly, the interface for the iPad version of this game is poor. With practice it becomes manageable, but I often struggled to direct my characters to the exact place on the map I wanted them to go to (and you need to be exact in a game like this). Combat meanwhile requires an awkward set of taps and tap-and-holds, that don’t necessarily make sense. It’s manageable with practice, as I mentioned above, but it’s not the intuitive experience that you’d hope for, and there is no way to customise the controls more to your liking. 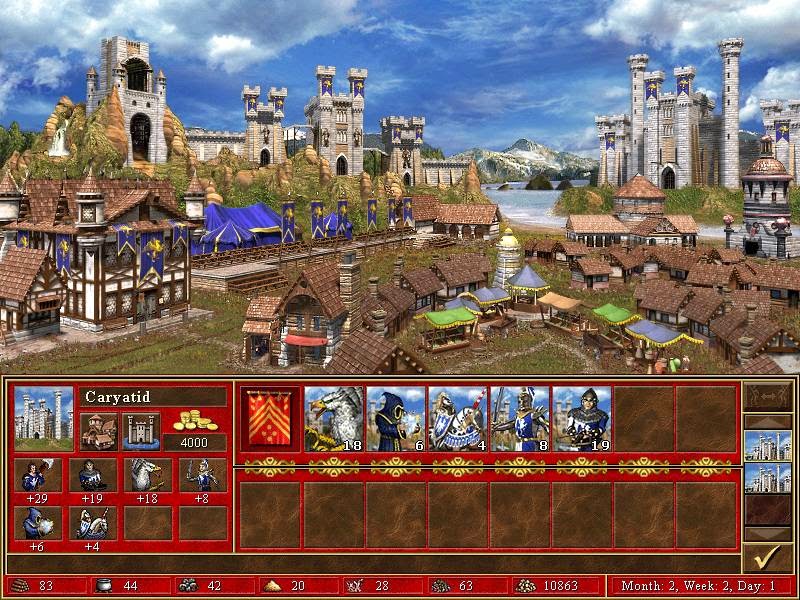 Related reading: For a CCG experience in the Might & Magic universe, consider Duel of Champions.

Heroes of Might & Magic III is a genuine classic game, and there is no denying that it is a supremely well-balanced, challenging and deeply engaging example of turn-based strategy. For all the promise of being a “HD” version, it’s not exactly what I would call an update, and seems to be filler so that Ubisoft can release something in January rather than a serious effort to update the game, but given it means I have Heroes of Might & Magic in my bag at all times, regardless of where I am, I’m not really complaining.

Bladestorm: Nightmare could be Koei Tecmo’s killer game in 2015