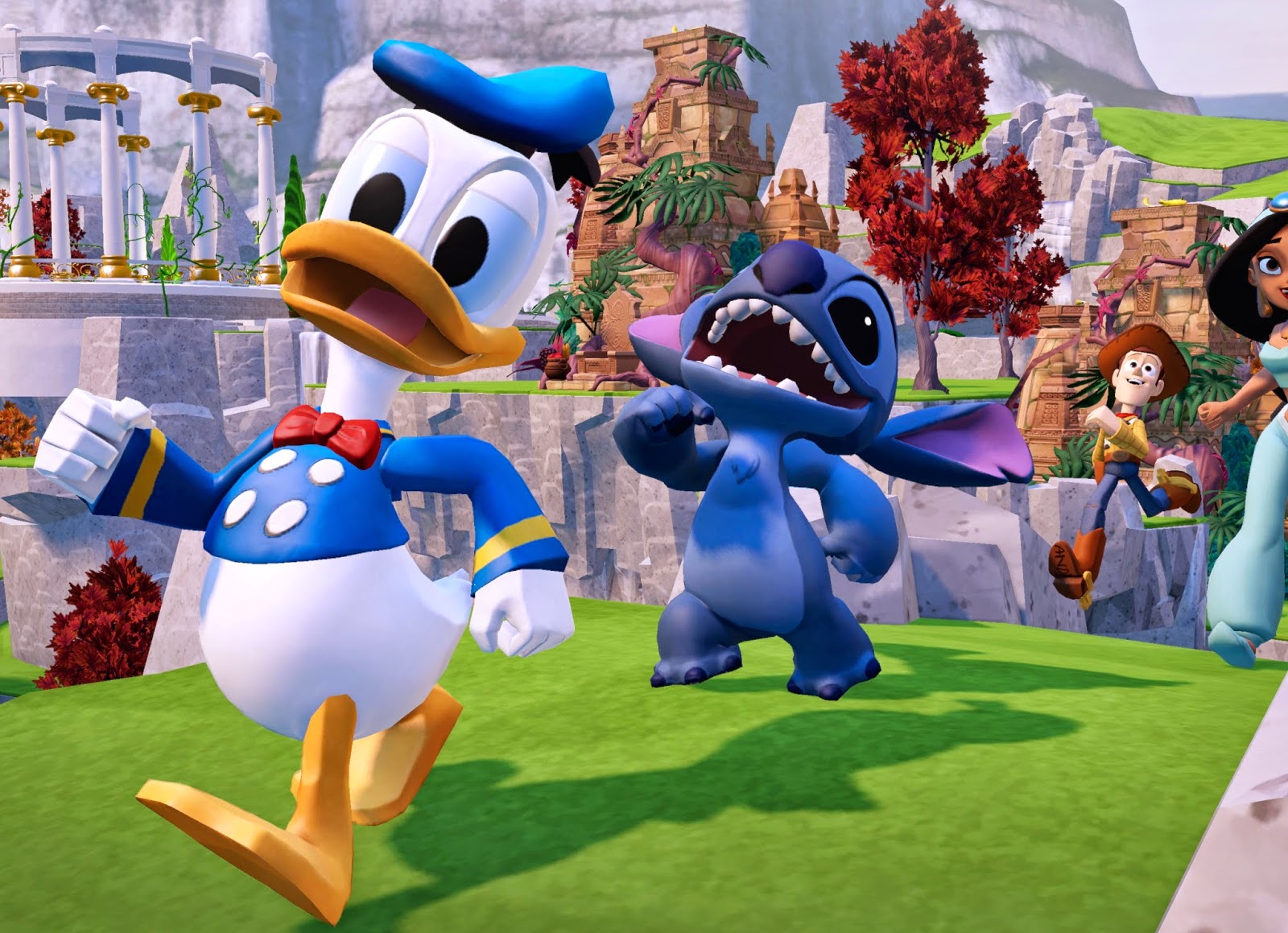 I really wasn’t going to give in to Disney Infinity 2.0. As much as I enjoyed the first, it’s a reality that these games are a killer on the wallet, and the idea that the game would offer a whole load of new miniatures was something I didn’t want to subject my bank account to.

But then I saw the Donald miniature. And now I’m the owner of a copy of Disney Infinity 2.0.

Amusingly enough, because I bought the download edition of the game (and can use the miniatures portal from the original Disney Infinity), I didn’t buy the starter edition of this game, and because the starter edition is the only way to play the Avenger levels, I haven’t been able to play the main selling point of this new game. But I did pick up the Defenders of the Galaxy set. And, of course, Donald. Donald is too cool for a set, and I’ll get to what he adds to the package shortly.

But first, Defenders of the Galaxy. In buying the set you’ll get access to a whole adventure set in the Defenders universe, where you’ll be able to play as any character that you own the miniature for (the starter set comes with two). Just like in Skylanders, when you drop the miniature on the portal, you summon it into the game, and then if you have a buddy that wants to play as well, they can drop their own miniature in as well. 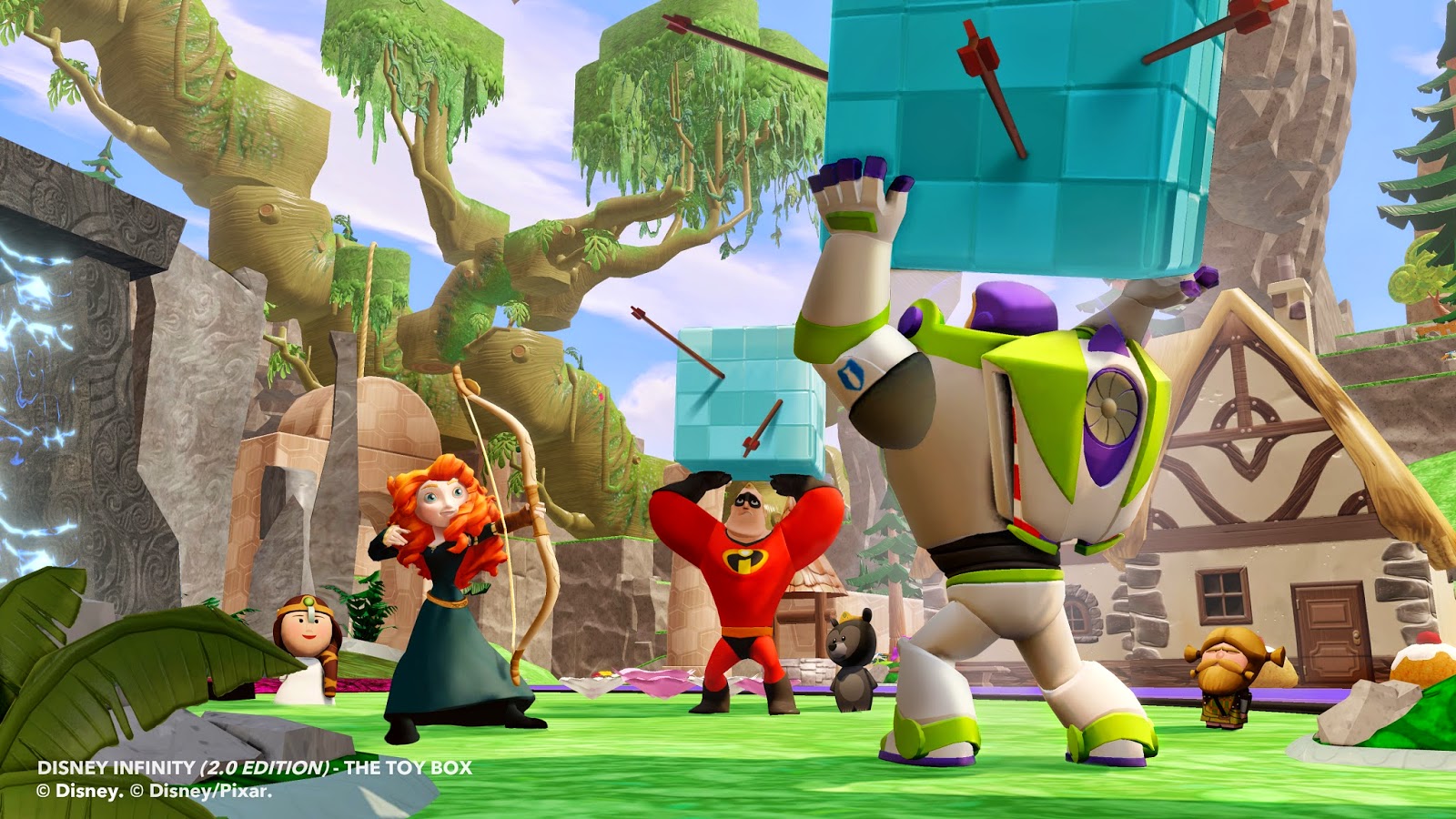 The Defenders of the Galaxy adventure plays well, with plenty of action and some basic platforming thrown in for good measure, and it’s a couple of hours of raw content that should appeal to the fans of the franchise. Where Skylanders scales down the challenge, storytelling, and action for young hands and minds, Disney Infinity is pitched a couple of years older, and while still definately a game for all ages, it’s easier to get into it as an adult as with Activision’s franchise (and it helps that the characters are more identifiably interesting to me, no doubt). The action is simple and can degenerate into button mashing at times, but its fast and furious enough, and controls well.

But the themed adventures are only a small part of the experience. The real meat to Disney Infinity 2.0 is its Toy Box mode, and you’ll be spending the majority of your time in here. As with the previous game, it’s a virtually endless experience where you’re able to wander around an open world, create environments of your own, compete with friends in multiplayer, or tackle simple missions of the “rescue XXX or find five of YYY” kind. And this is where our friends who don’t have themed adventure sets, such as Donald, belong. Donald doesn’t get to have is own story, but he brims with the angry duck personality that we all love in the Toy Box mode anyway.

Previous miniatures can also be imported into Infinity 2.0 for that same Toy Box mode, and there’s some neat upgrades to be found in their 2.0 adventures. As characters complete objectives they get experience, and now each character has a skill tree to upgrade. Is it the most in-depth skill tree out there? Not even close, but it does add longevity to the game by encouraging you to spend a load of time with your favourite characters. And with there being so many miniatures and options for creating your own levels in the Toy Box mode now, there’s dozens and dozens of hours of gameplay in here. And if you ever want anything more then you just need to go and buy yourself a new miniature, which acts a little like a physical DLC unlock. 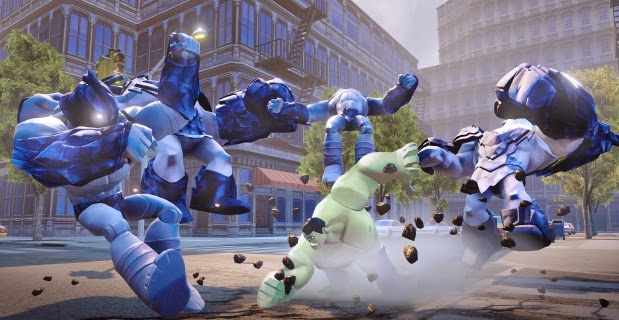 For the main themed adventures that’s a sticking point. There is content that is locked away in each game that can only be accessed with a relevant character from another set. To see everything in the Guardians of the Galaxy adventure, for instance, you’re going to need to splurge on a handful of other miniatures. This is how the first game worked as well and it’s a little disappointing to see such a cynical ploy in what is otherwise a generous system, but the good news is that if you can handle not being able to access all the content you’ll be able to finish an adventure with the default characters.

For the Toy Box mode, meanwhile, each new character simply adds a wealth of content. Like a real toy box, the more stuff that’s in there the more the imagination has room to play, and it’s actually worth buying as many miniatures as possible just to have the virtual toy box overflowing. The creativity that Disney Infinity 2.0 encourages also makes it a game that I would recommend that children do play, because it is a more active way of engaging the parts of the brain that need developing than most games out there.

Finally, the miniatures themselves are of an incredibly high quality, and this is the real secret behind the success of this series – it doesn’t matter if you’re a big fan of gaming. So long as you’re a fan of Disney you’re going to buy into the highly collectible miniatures. As I said, I’m a fan of Donald and that miniature convinced me I had to have this game. 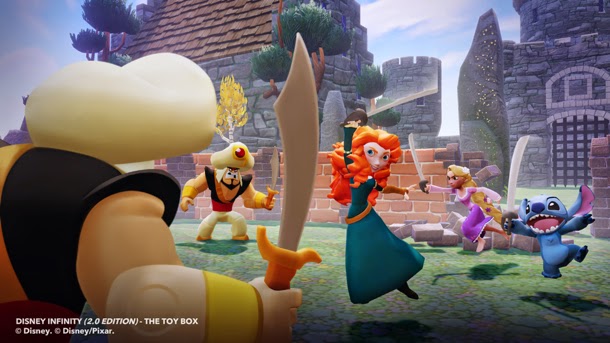 Disney, as with Activision, is going to face stiff competition from Nintendo with its Amiibo line (which taps into the same sense of nostalgic loyalty as Disney Infinity, in fact, and is a bigger threat to it than Skylanders). But Infinity 2.0 shows that the franchise is on the right track, and it might just wind up on top.

Vote for your favourite games of 2014, and win a PlayStation 3 double pack or Persona Q on 3DS!