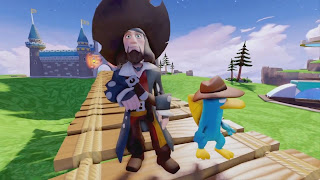 When it came time to head down to the local game store and pick up my copy of Disney Infinity, the only platform that made sense to me was the Nintendo Wii U. Not because the Gamepad is used in any special way (it isn’t), but for the same reason that the same magic that made Disney such a special company when Walt was in charge is the magic that makes Nintendo games so compelling.
Both companies share a love of timeless stories that attract both young and old. Both companies have a heritage of unrelenting focus on quality, and both companies are responsible for the kind of fairy tales that captures children young and then continue to delight them through their adult lives. So it seemed natural for me to pair Disney to Nintendo when it came to playing this, Disney’s most important game to debate. 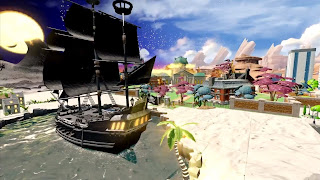 With development costs in excess of $100 million, Disney Infinity is a game that could really afford to fail. But by the same token there was never any real risk of it failing; for Disney Infinity is not just a game, it’s a franchise into itself with physical miniatures being an integral part of the experience. Buy into Disney Infinity and there’s every chance you’ll then shell out the $200 AUD extra it would take to buy all the miniatures and get the full game experience. If you’re a Disney fan and you don’t even own a game console you’re probably going to buy a handful of these miniatures as well, because they are incredibly well made and would fit in nicely with the collection of classic Disney goods that come back from a trip to Disneyland.

And in this game Disney has created a platform for future revenue. All it would take is the release of a Star Wars, Marvel or Mickey set of miniatures to sell a few million more copies of the game, and then there’s a massive backlog of “lesser” Disney characters and films to draw on – think Donald, The Nightmare Before Christmas, Dumbo, Fantasia – every single one of these franchises has a proud tradition with a fanbase that will buy into the game to experience. Suddenly that $100 million investment makes sense for with Disney Infinity Disney has come up with a product that can have a pipeline of steady revenue for years. 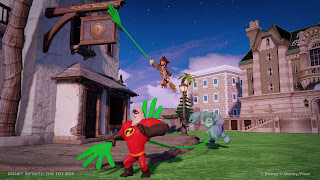 With a total cost of a couple hundred dollars naturally some people have raised questions on whether the game can possibly be worth that investment. In short, it is. Each physical miniature summons the corresponding character into the game world associated with it when placed on a board that comes packed in with the game. The miniature for Jack Sparrow will bring up the Caribbean and Jack Sparrow in-game, for instance. Each of these game worlds comes with an adventure that lasts between 5-10 hours of play and so, the basic set that comes with Monsters Inc, The Incredibles and the Pirates of the Caribbean worlds it 20 or so hour’s worth of content, then, and the additional characters from other Disney franchises all add additional content – so if you think of them as physical DLC the price tag starts to make more sense.

This price also buys access to the Toy Box, which is basically what it sounds like. Players are left free to design and populate their own environments however they feel fit to – kind of like a Disney version of Lego, really. Playing through the main game’s levels unlocks content in this Toy Box, but given there are over 1000 objects to populate the Toy Box, unlocking everything would be a grind. Thankfully for the less committed players it’s possible to buy these objects directly courtesy of packs of “discs” that can be bought and then zapped into the game in the same way that the miniatures are.

While clearly designed to be accessible to children and nowhere near as rich or deep as other games that have player-generated content like LittleBigPlanet, this Toy Box is the highlight of Disney Infinity. The game itself is well-made and all the levels are fun variations of action platformers with unique features appropriate to their respective franchises built in; the Pirates levels feature ship combat, for instance. But the most fun is in the Toy Box, where creativity rules and creating intricate monuments to Disney ingenuity is impossible to resist spending hour after hour in. I literally cheered when I unlocked the Scrooge McDuck money vault.

Equally impressive is the game’s second screen experience. By that I don’t mean the Wii U Gamepad, which is almost completely underutilized. The second screen I’m referring to here is the iPad, with Disney planning a couple of applications that link in to your “main game” account. For instance, you’ll be able to build Toy Box environments on your iPad, and then come back home and play on it on your console. Disney’s goal is to build a game infrastructure that travels everywhere with you, and that second screen experience certainly helps realise that ambition. 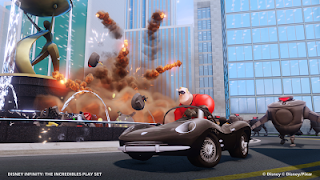 There’s a couple of fun little minigames for multiplayer, and if you have two miniatures from the same set then it’s possible to co-op the way through the story modes. Given that the game was designed so parents and children can play together this local co-op capability is especially compelling. I hope the picture that is being painted here is that Disney Infinity contains a wealth of content to justify its asking price, because it really does, and even more excitingly, it’s endlessly expandable, with the only real limit being Disney’s near-bottomless archives.

Disney Infinity also looks great, in a very Disney sense of the word, and each of the environments in the the game have their own original storylines; they’re simple, but they’re Disney.

And that’s what Disney Infinity is – it’s a giant love letter to everything Disney, a collector’s dream and a parent’s nightmare. It’s expensive to own everything (though not necessary to buy anything beyond the starter set to enjoy yourself immensely), but it offers unbounded creativity and one of the finest and most accessible virtual toy boxes you’ll ever experience in the games industry. The potential for this game to expand even further into the future is truly exciting.

– Matt S
Editor-in-Chief
Find me on Twitter: @DigitallyDownld
I’m on MiiVerse too: WaltzIT

Project Phoenix: One Kickstarter to watch