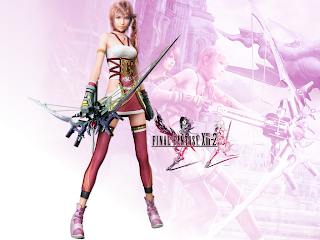 Final Fantasy XIII and its sequels have been met with some mixed reactions, though most would agree that the mechanics in part XIII-2 addressed a lot of the concerns that stemmed from the first title. I know personally, I enjoyed Final Fantasy XIII-2 quite a bit (and it was in fact the first game I ever got a platinum trophy on for my PlayStation 3). Now this game has a release date for the PC.

With Final Fantasy XIII having debuted on the PC last month, Square Enix has announced that Final Fantasy XIII-2 will land on Steam December 11th. Perhaps most interesting of all is that the PC version of the game promises to have new features, though details on those are somewhat scarce at this point.

I know this is a title I am looking forward to – how about the rest of you? I thought that XIII-2 showed a lot of improvements over the linearity of the first iteration. Also, if you did not have a chance to see it, we have our review for the latest release in the series, Lightning Returns. Matt really enjoyed the game and it is among those listed among many other titles in our Games of the Year contest you can find here.