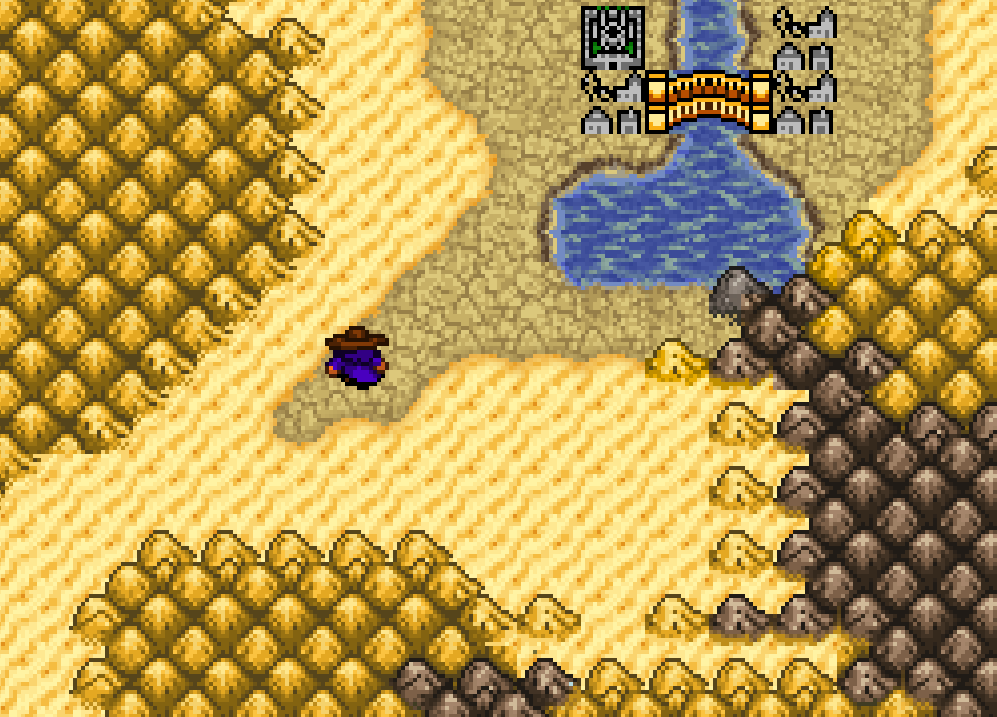 If you haven’t been playing JRPGs for decades, than the idea of taking control of a little pixel hero and then running around in circles fighting the same enemies over and over and over again to build enough experience to take down a tough boss at the end of a dark dungeon probably sounds like a waste of time to you.

And yet for those of us that did grow up playing Final Fantasy in its early years, or remember what an “SSI” when we were looking for a Dungeons & Dragons fix, this very same idea brings with it such a rush of nostalgia that it’s impossible to ignore a game that deliberately implements such an archaic approach to progress.

Dragon Fantasy: Book 1 is that kind of game. And it’s wonderful. From obscene difficulty spikes, to labyrinthine dungeons with an equally obscene encounter rate, Dragon Fantasy is not only a tribute to old Dragon Quest and Final Fantasy games, but it takes great pleasure in frustrating the most masochistic of players. 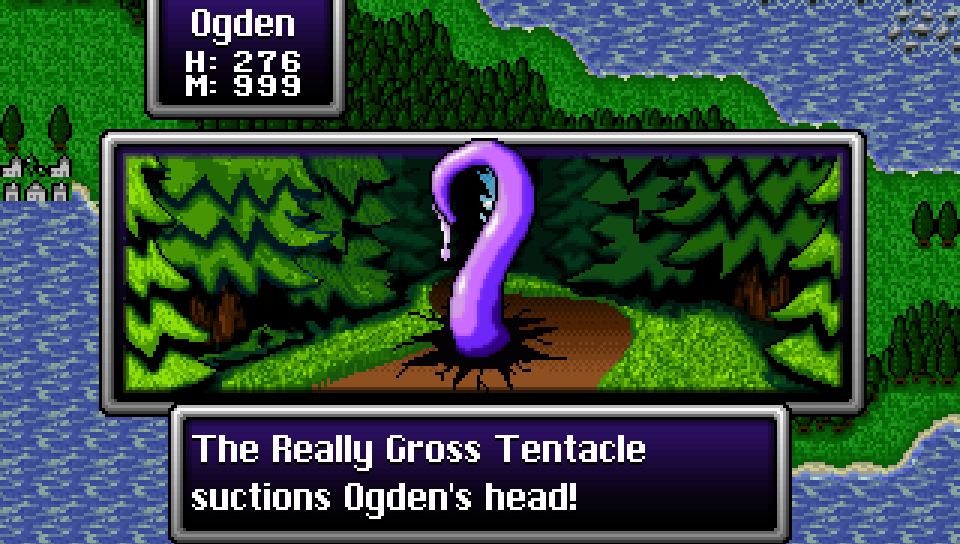 There are points within the adventure where there is no other option but to simply wander around in circles and “level up,” because the next dungeon is simply too deadly otherwise. But Muteki Corporation, the developer, works hard to put a smile on a player’s face even as it frustrates him or her. Dragon Fantasy is both silly and self referential, with some truly ridiculous monster designs and plot direction. The developer is also keenly aware of not outstaying its welcome – none of the chapters in the game are especially lengthy, and there’s no attempt at tricking the player to spend more time in the game for the sake of padding.

It’s the kind of “get in, have fun, get out” game that I wish there were more of in the world, because I never felt pressured to waste my life away collecting things or doing side quests that I wasn’t interested in. There aren’t optional bosses that I feel forced to fight in order to see everything. There aren’t sex minigames, or libraries of books of lore to build up, or gambling, or hidden objects to find; the whole experience is to the point and focused on getting the core right. Even with the occasional bout of grinding, I finished the first chapter, Ogden’s story, in about 5 1/2 hours and the second and third chapters aren’t much different in length. It’s efficient, and it scratches the nostalgia itch nicely.

It also means that Dragon Fantasy doesn’t offer any kind of depth to really get stuck into. The combat system is painfully shallow, with characters simply picking their most powerful attack and spamming it until the other thing is dead, and the extent of the upgrade system is as follows: new town, new, more powerful weapons. Buy, equip, and go. 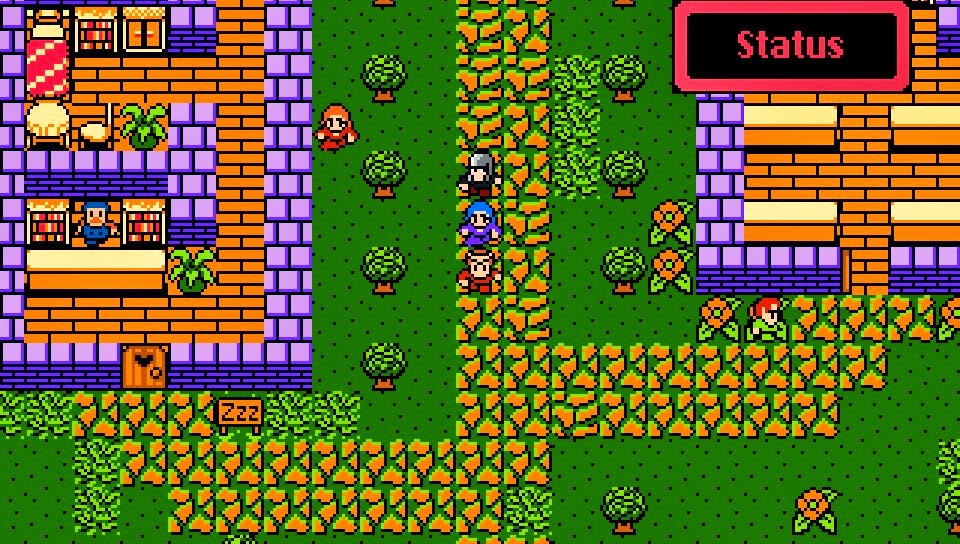 The narrative doesn’t fare much better. Each of the chapters makes use of the same world and overarching story (in short: Dark Knight attacks castle. Heroes try to stop him in their own way), but each chapter actually plays differently. Odgen is a tribute to Dragon Quest. As in, the first one, where players control one hero for the entire quest. Ander’s story gives players a group of heroes and works like an early Final Fantasy game. Jerald’s story plays a little like Rogue and tasks players with collecting a mass of gold to buy fake passports and escape danger. There’s also a “side story” chapter which is inspired by Minecraft.

Each of these chapters plays just differently enough to keep interest going in playing through all three of them. It’s also a great set up that I wish had have been used in more complex ways. For instance, it would have been great to be able to play out all three chapters on the one save file, and depending on which chapter I had already finished, the game would have different plot threads in my current chapter (perhaps the hero from an earlier chapter had changed the village in some significant way, or a boss was already dead…) All that said, as the game’s story stands, it’s good for a laugh or ten, and is is strongly reminiscent of the early JRPGs I great up playing. It’s also a nice touch the game is cross-buy compatible, meaning you can play at home on the big screen TV through your PlayStation 3, and then use the same save file on the Vita when you’re out and about.

The game is gorgeous, in its self-referential kind of way. Players can choose either an 8-bit or 16-bit aesthetic, so you can make your game look like a NES title or a SNES one at will. I personally found it entertaining to play on 8-bit on my Vita, and 16-bit on my PS3 – this way it took me right back to the kind of gaming experience I had as a kid with a SNES and Game Boy. 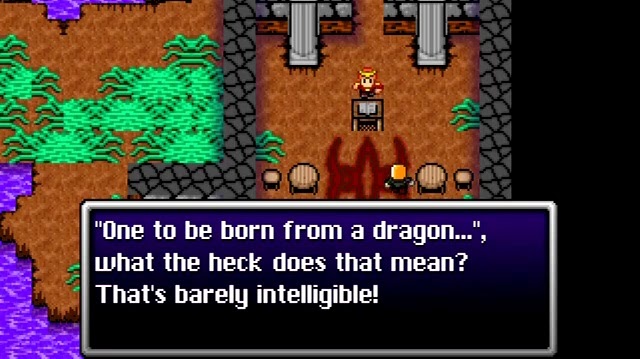 It doesn’t matter which aesthetic you do choose, either way Dragon Fantasy is bright and colourful. Enemy designs are bold and basic, and aim more for the comedic than the cute. The rock men are no Dragon Quest’s slime, for instance, but they work as a parody of such an enemy. Environments are cheerful, and cover all the standard stuff that you would expect to find in a traditional JRPG.

The end product is a game that’s a load of fun, but only for people with fond memories of running around in circles fighting wave after wave of random encounters. As equal parts homage and parody, Dragon Fantasy works. It’s achieved everything it set out to achieve, but sadly what the game looked to achieve is something quite limited and limiting, and so Dragon Fantasy also fails to offer anything genuinely new.