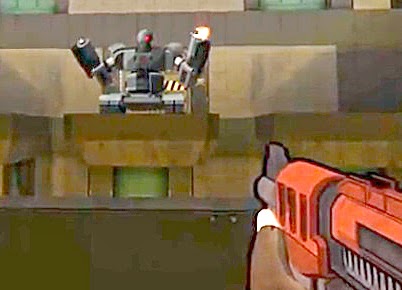 People that grew up in the late ’80s and early ’90s undoubtedly have fond memories of arcade-style FPS corridor shooters. Wolfenstein and Doom were all the rage (no pun intended) and for good reason; the pure fast-paced nature of these games is, simply put, a lot of fun. Indie developer Final Boss Entertainment’s Wrack reanimates the old-school corridor shooter once again in a fantastic cel-shaded style. Fans both new and old alike should indeed be looking forward to this one.

The speed of the game play in Wrack is instantly captivating. Swiftly running and gunning through the corridors might bring back a bit of nostalgia for some, but it feels great still today. In a more modern touch, putting down baddies finds kill count combos quickly becoming commonplace, significantly increasing the level score with intentional combo chains.

Like any good shooter, Wrack comes loaded with an arsenal of weapons to annihilate enemies with. While most of the weapons are standard fare, a sword is a stand out addition to the weapon’s cache that brings a unique (and unexpected) twist the genre. Where normally it’s the unlimited ammo of the pistol that is turned to when a hailstorm of lead has depleted all of the ammo reserves, things here get up close and personal instead. Of course, the sword also makes quick work of the slow moving non-ranged enemies, but let’s be real here – that’s what the shotgun is for!

Wrack is currently in Early Access on Steam and shaping up for a full release that is planned for later this year. Even though the game isn’t complete yet, it already runs well and there’s a lot of game to sink into here already. The main Campaign mode’s comic-style storyboards are mostly in place, offering an equally witty and fitting superhero tale of imminent danger from a powerful alien horde – remember, this is a throwback to the genre’s roots – and the Time and Score Attack modes simply beg for the speed runners to bring their “A” game. Those afraid to jump into an Early Access or beta title have little to fear with taking the early plunge here.

The Early Access program does (and will continue to) have flaws, but it also allows for the opportunity for the developer to create an intimate relationship with its fans. From what I’ve seen, Final Boss Entertainment has done a great job of working with those who’ve already made the jump into Wrack. For those whom have, they’ve been treated to another special treat: WrackEd. Ever wanted to create an old-school corridor shooter? Wrack’s level editor comes preloaded with the modding tools needed to do just that. The developer encourages players to dive in head first and even showcases maps within the game itself through Featured Maps. And yes, as to be expected, the Wrack-styled Doom clones are already on Steam Workshop. Fitting, really. 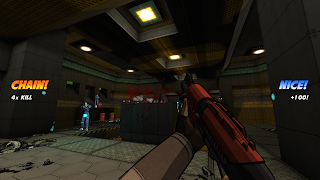 Did I mention the Mega Man inspired boss fights yet? Yes, there are giant mechanised arena fights with bosses that have attack patterns that need to be learned, and it actually works in a FPS viewpoint. These challenging segments are highlights of the title, bring along that extra touch needed to give it an edge in the ever-growing competition of indie titles on Steam trying to find a niche. My only real complaint is that I’d like to see a greater diversity in the enemy types to keep the repetition that comes with these types of corridor shooters at bay for as long as possible.

The fast arcade-FPS action contained in cel-shaded style in Final Boss Entertainment’s Wrack is old-school love reanimated to life once again. It’s a title that’s not afraid to throw a sly joke at itself, nor sucking players into seemingly endless corridors filled with alien scum to annihilate at blistering speeds. Wrack looks to be shaping up to be a retro FPS title that can soothe old-school souls, and, oh yeah – it has a sword too.