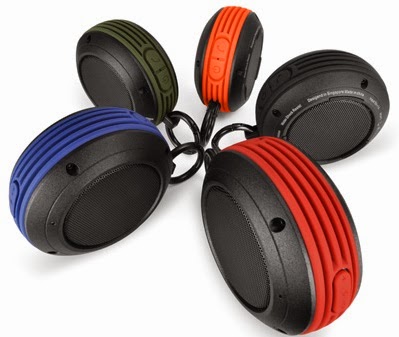 What do you look for in an everyday Bluetooth speaker? Decent build quality? Definitely. Good value? Absolutely. Long battery life? Of course. Incredible sound? Whoa, hold on there for a minute.

The fact is, great sound doesn’t come cheap. Bluetooth speakers do a good job of sounding better than an iPhone, but you’ll need to spend hundreds of dollars if you want something that’s comparable to your home hi-fi. Instead, most affordable units concentrate on the mid-vocal frequencies, producing music that’s good enough for casual use but too tinny for serious listening. Happily, the Voombox Travel has a neat little trick up its sleeve, and it sounds all the better for it. But, before I reveal Divoom’s big secret, let’s take a look at the rest of that checklist.

The Voombox Travel is a rugged, portable unit that bears a striking resemblance to an oversized hockey puck. The outer rim is rubberised to protect against everyday knocks, while the speaker drivers are located behind tough plastic casing and a solid metal grille. There’s a small karabiner on top, and the multifunction USB port is covered by a water-resistant flap. Divoom’s website optimistically shows the device clipped to a climbing harness (though at 261g, I’d say it’s a little too bulky for that) but it’s obvious that this is intended to be a go-anywhere kind of speaker. Build quality isn’t a problem.

Nor is battery life. The Voombox has a 6-hour battery but, like the Divoom Onbeat-200 (which we reviewed here 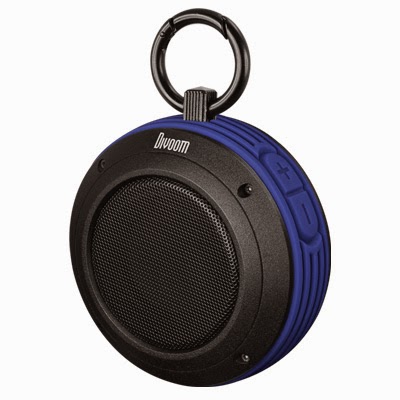 Which just leaves the sound. Are you ready for the big reveal? Well, it’s a re-working of an old trick. The Voombox uses two drivers: a powered unit which covers the full audio spectrum, and a passive woofer to emphasise the bass. The rear of the device has three rubber micro-feet that suspend it fractionally in the air, allowing the bass to resonate against whatever surface it’s resting on. The result is a much bigger sound than you’d expect, and one that’s powerful enough to avoid the problems faced by some portable speakers. Simple, expansive tunes sound best, but rock songs don’t perform badly either. Critical listening reveals slight muddiness and the expected emphasis on mid-frequency tones, but neither problem is particularly noticeable unless you perform direct comparisons against higher-spec equipment.

A couple of drawbacks are worth mentioning. Chief amongst these is the quality of the Bluetooth link, as moving the speaker away from the sound source can lead to momentary interruptions in playback. However, if you keep your player reasonably stationary then you shouldn’t have too many problems. My only other complaint is that vibrations from the bass can cause the unit to skitter around when the volume gets too high. In fact, scrub that; it’s not a complaint. It’s actually quite hilarious if it happens when you’re not expecting it.

Divoom have come a long way over the last few months. The Voombox Travel improves on the Onbeat 200 in every way except for battery life, and manages to produce surprisingly good sound from a compact unit. It has all the features you’d want in a portable speaker, and it won’t break the bank either. This is one speaker that’s worth listening to.