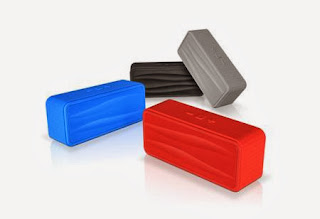 Do you own a Bluetooth speaker? If not, I confidently predict that you’ll have one by Christmas. They’re this year’s seasonal gadget of choice, and they vary from pocket-sized gizmos to full hi-fi replacements. The Divoom Onbeat-200 falls somewhere in the middle: it’s mid-price, mid-spec and mid-performance. But there’s one area in which it has few equals: for its size, this thing is LOUD.

The incredible volume levels are supplied courtesy of a rubberised, brick-like housing which contains no less than three speakers. Two of these are tuned at the upper-vocal range, while lower tones are provided by an unpowered, passive bass radiator. Together they provide enough juice to annoy the most mild-mannered of neighbours. There’s a small amount of distortion when things are rocking at full blast, but it’s safe to say that you’ll be too busy shielding your ears to notice. 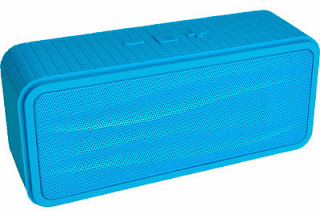 Physically, the unit is rather smart. 17cm long and weighing in at a chunky 550g, it’s portable without being pocket-sized. It charges via USB in around three hours and, in our tests, lasted for longer than the 8 hours that Divoom suggest. Primary connectivity is provided via Bluetooth, but there’s also a 3.5mm jack for use with older gadgets.

The sound quality is – well, the sound quality is complicated. In a nutshell, it’s comparable to a decent portable radio, but with a few nuances. The speakers are housed behind a rigid metal mesh, with the main units on the front and the passive radiator at the rear. This gives a choice of soundscape: if you need more bass, simply turn the unit round. At moderate volumes, the result is a pleasing sense of depth and a reasonable (if slightly bright) sound mix. However, crank up the noise and the bass is quickly overwhelmed, leading to overemphasised mid-tones and a tinny, nasal sound in rock songs. Other genres fare better, and internet radio sounds great, but this is still a device that performs best when used unadventurously. 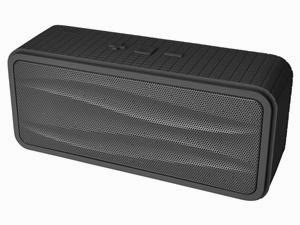 Despite that, it’s an easy unit to live with. Bluetooth pairing is straightforward, and there’s little interference barring a brief electronic warble on initial power-on. The unit has a few simple controls, but it’s far more effective to control volume and track playback from your mobile device. We tested the Bluetooth connection with an iPhone 4S, an iPad 2 and a basic Android tablet, and the Onbeat-200 worked well with them all. The wired connection – in this case, with an old Creative Zen – was quieter, but acceptable. The unit can also be set up to act as a speakerphone, although we found reception boomy and transmission less than clear, so conversations were difficult to understand.

In the end, the Divoom Onbeat-200 works exactly how you’d expect a US$80 device to work. It’s robustly made, sounds reasonably good, and has great connectivity and battery life. Audiophiles should look elsewhere – especially at the ear-perforating volumes that the speakers are capable of – but it’s a decent mid-range choice.