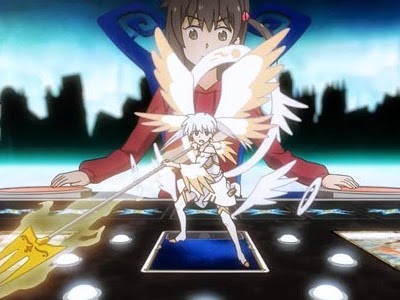 News by Clark A.
As the spring anime season winds down, Selector Infected WIXOSS is among the first batch of twelve-parters to conclude. The final episode of the card battling series aired recently in Japan as well as the rest of the world via simulcast on Crunchyroll and FUNimation.
That doesn’t mean the franchise itself is finished, however; WIXOSS is returning with a sequel this autumn. It’s also packing a new moniker rather than a traditional title with pretty roman numerals attached: Selector Spread WIXOSS. While Selector Infected WIXOSS was planned to have a second cour for a while now, there’s always room to exercise caution when it comes to sequels actually materialising and this official confirmation should deliver some relief for fans whilst providing new tidbits of info.
There’s news on the manga front, too. The anime series will be receiving a spin-off manga in the July 19th issue of Shueisha’s Ultra Jump magazine. A second spin-off called Selector Infected WIXOSS -Re/verse- will appear in Square-Enix‘s Big Gangan and feature an original protagonist.
If you haven’t checked out the show, you can do so at the aforementioned streaming sites or simply read our initial impressions if you’re so inclined.
– Clark A.
Anime Editor
Email me at: clarka@digitallydownloaded.net
Share this

Review: Atelier Rorona Plus: The Alchemist of Arland (Sony PlayStation 3)