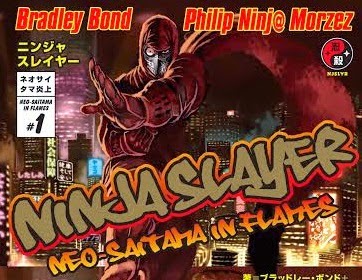 You don’t get weirder than this; Ninja Slayer is a graphic novel that was written by two Americans, and published on the Internet via Twitter. It was then published as a graphic novel and somehow sold a boatload of copies (more than 300,000, in fact).

Now it’s being turned into an anime courtesy of Studio Trigger; the folks behind Kill la Kill.

Folks that head along to the Anime Expo 2014 in LA will get to see a promotional trailer of this anime on July 3, at 6:00PM. At the same show, you’ll be able to buy a boatload of new promotional posters and other such goodies from the Good Smile Company booth.

I think it can go without saying that this game is going to be truly nuts, and weird, and wonderful. Everything we love about anime, in other words.