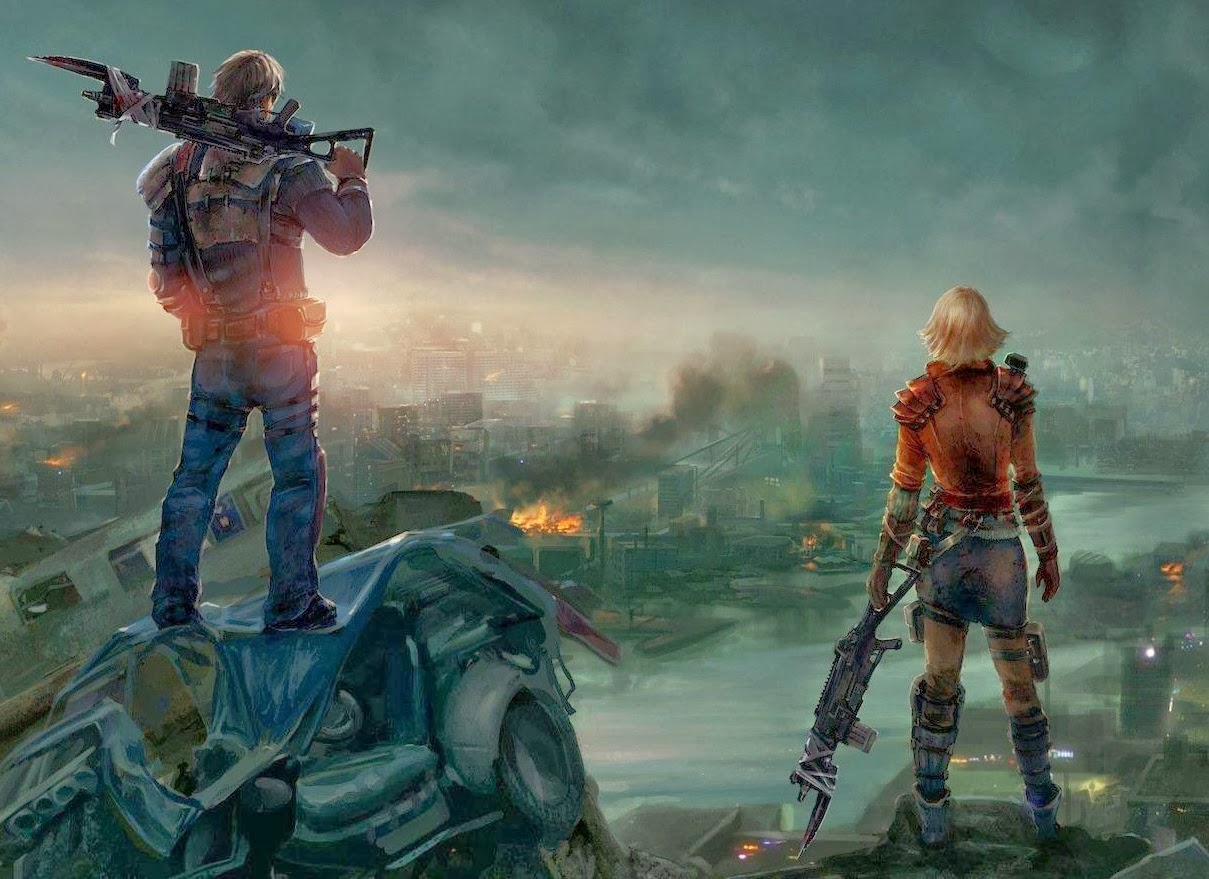 While I don’t often find myself playing your typical zombie horror often, there’s been an evolution of the genre over the last few years that’s hard to miss, even for a casual such as myself. While the shuffling undead used to serve as moving targets, newer titles explore the world around the zombies, often stranding players in open worlds and leaving them to their own devices. More often than not, the real threat comes from other survivors (The Last of Us anyone?), and the shambling corpses and post-apocalyptic world are merely the backdrops through which the drama unfolds.

Maybe that’s why Dead Nation: Apocalypse Edition feels so refreshing. Unlike its contemporaries, Dead Nation doesn’t bother to craft a compelling story, or an engaging and immersive world. Rather, it sticks to what it does best: zombie killing. And while it stumbles more than once, it’s still a worthwhile experience for those who adopted a PlayStation 4 in its early months.

Dead Nation’s setting and landscape may be set in a post-apocalyptic world, but contrary to the open-world survivor games that happen to be infested with zombies, Dead Nation feels very deliberate in the way its levels are crafted. Overturned cars and blocked paths litter the city streets, giving the game a more claustrophobic and tighter feel. It’s not so much a question of how you will get to the next checkpoint, but rather if you’ll be able to navigate the infested streets as you make your way through the game’s ten different missions. 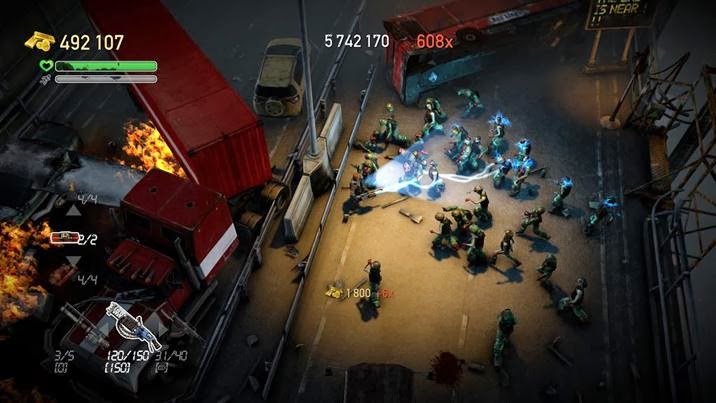 This carefully crafted feel extends to the player as well; there’s a definite feeling of weightiness to your actions, and consequences will rear their ugly heads should you make rash decisions. While the game’s default weapon has infinite ammo, it fires slowly, and you’ll have to take careful aim with your shots; firing blindly won’t get you far. Even if you choose to outfit yourself with more powerful firearms, ammo for these weapons are scarce, and depleting your resources too early will make it that much harder to reach the next safe haven, especially on harder difficulty levels.

These constraints are still present during a co-op run, although some of tension is mitigated with the freedom to rely on a partner. Like many co-operative focused shooters that have come before it, Dead Nation can be enjoyed solo, but it’s at its best when tackled with a partner. With careful planning, there’s a great sense of back and forth to be had when playing in tandem. With limited resources and chances to upgrade your arsenal, it’s far more efficient to split the difference with another player, and play off each other’s strengths and weaknesses by pulling out the right weapon at the right time. For instance, during my co-op playthrough, I focused on upgrading my close-quarter combat weapons, while my partner poured his resources into fast-firing firearms and throwable explosives.

Unfortunately, the issues that were present in the original release haven’t been fixed, and while they don’t go as far as to ruin the experience outright, their presence is still a tad disappointing. With a game that puts a definite emphasis on careful and tactical shooting and maneuvering, the gun handling occasionally feels imprecise, typically when you are dealing with a few heavy-hitters, as opposed to a sizeable wave of shuffling drones. Dark lighting and awkward camera angles only exacerbate the problem, and it’s a bit disheartening when a perfectly good run is ruined when an out-of-sight zombie lands a surprise attack on you. 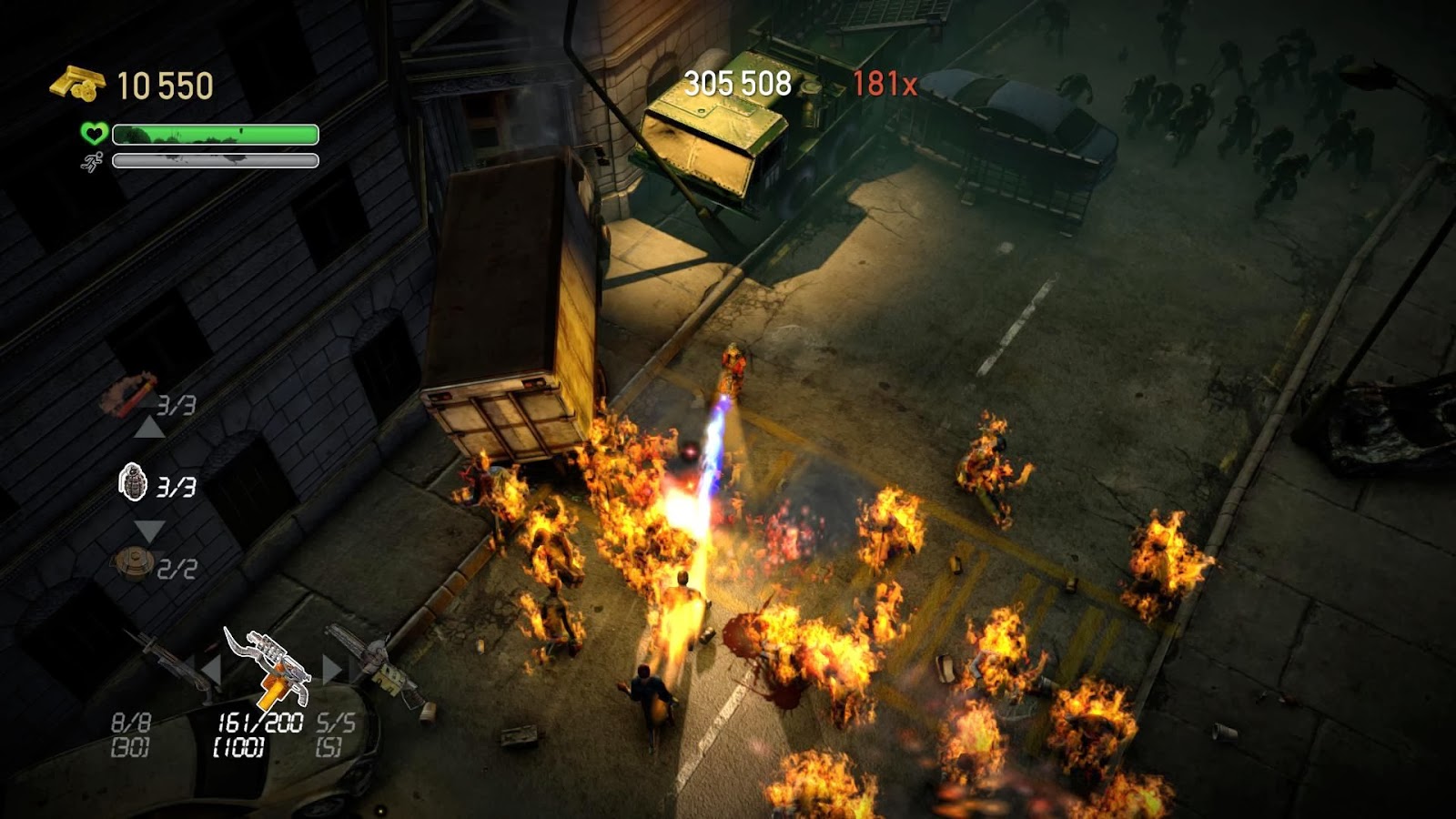 The old design quirks are complements by a few new additions to the PlayStation 4 re-release, aptly titled “Apocalypse Edition”. Scant technical improvements have been made; the game now boasts improved lighting effects and runs in full 1080p, but for the most part it feels decidedly last-gen, especially since it’s still locked to a somewhat disappointing 30 frames-per-second. The Arcade and Endless modes, which were released as an expansion back on the PlayStation 3, are now included in the main game. These modes simply offer up slight tweaks on how the game is played, and are nothing more than a slight distraction. The same can be said for the newly included Challenge mode, which is essentially a separate, high-score chasing, leaderboard focused distraction. Perhaps the most novel addition is the Broadcast+ mode, which allows you to stream your game to the public, and let viewers influence various factors of your playthrough, by voting to alter factors such as zombie spawns, ammo drops, or basic abilities, such as disabling the ability to sprint.

While it doesn’t exactly scream ‘next-gen’, Dead Nation: Apocalypse Edition is a welcome addition to the PlayStation Network, and is a hopefully a sign of good things to come. It’s been a slow time for Sony’s newest console, and with awful titles such as Putty Squad and Basement Crawl finding their way onto the digital storefront, Dead Nation is a title that’s actually deserving of your money, even if it’s still carrying the same baggage from its first outing.