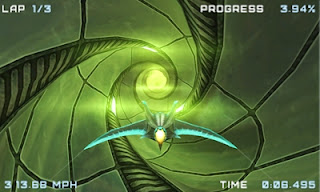 AiRace Xeno is a fitting title for this game, considering the game takes the exact same formula as its predecessor, AiRace Speed, but adds an alien-styled theme to it. “AiRace Dubstep Edition” would be an even better fit, because it’s the crazy hard hitting techno beats that set this release apart. Everything else is just more of the same with a cheaper entry fee.

For those who don’t already have an AiRace title on their 3DS, Xeno is well worth the investment. AiRace titles are all about locking the throttle to the max, and tunnelling through the twist and turns of some truly treacherous tracks at breakneck speeds. Each track offers its own unique style and track layout, with branching pathways and hidden shortcuts to be found. At first, you’ll barely touch the turbo button as you learn the ropes of each track, but to have any chance of success here you’ll need as much of that nitrous button as you can squeeze out of it. If at first you don’t succeed, go down in a fire of blazing glory and all that.

Tight controls are supported by slick graphics filled with neon obstacles that are easy to spot when the frames are blasting by in milliseconds. The pumping soundtrack is also a big plus for a cheap downloadable title on the 3DS eShop. Yet, if you start to look closely, there are a few questionable things to be found here as well. For starters, the super stylish opening cinematic that was found in AiRace Speed is the very same stylish opening cinematic that’s found in AiRace Xeno. While this isn’t a deal breaker by any means, the cool dubstep style of the game could have easily been used to create an even more stylish opening for Xeno. Also, Xeno is practically half the size of Speed. Speed featured 18 tracks and 5 ships, Xeno only has 9 tracks and 3 ships on offer. 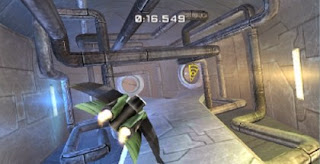 Online leaderboards return to keep friends’ fastest lap times in view, adding a nice layer of replay value to the game. The in-game achievement system also makes its return in similar style from Speed, putting a multitude of extra challenges to be overcome for those who want to dig a bit deeper into the game, even if there’s little reward in doing so. In fact, most everything feels exactly the same as the last game, aside from the alien polish and the dubstep music. The formula isn’t broke and it doesn’t need fixing, which brings to question – why does AiRace Xeno even exist? It feels like a DLC package for the previous game, really. The cheap asking price does make this more agreeable, but when the two titles even share the very same opening sequence, the mere existence of this title is, well, questionable.

AiRace Xeno is a fast-paced tunnel racer that’s adrenaline filled fun for 3DS owners. Its cool alien-styled theme and intense dubstep soundtrack bring an extra bit of flair to the series, but there’s no denying that it feels like the exact same game that we’ve already played in AiRace Speed. Those new to the series should strap in and hold on tight – it’s one heck of a wild ride – but AiRace veterans might want to let this one stay in the pits.