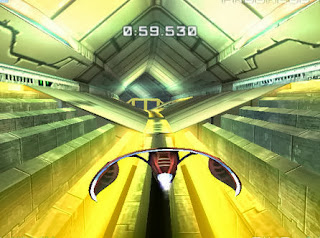 I’ve developed a lot of respect for QubicGames after playing AiRace: Speed. We’ve all flown planes through tunnels in one game or another, so much so that it can hardly be called a fresh gameplay experience. AiRace takes the familiar gameplay of these titles and gives it a bigger budget and more impact, proving that maybe there’s still some life in tunnel flyers after all.

The gameplay does not need a great deal of explanation. You pilot a futuristic plane, flying down narrow corridors and through obstacles in an attempt to reach the end. In addition to moving and rotating your ship, AiRace Speed also adds options to brake and activate a turbo boost. There are a total of eighteen levels, which might not sound like much but online leaderboards and achievements make repeating levels more worthwhile.

The game’s visual direction most definitely needs to be lauded. The geometric and brightly coloured environments give a real sense of speed while adding to the personality of each stage. The tunnels also occasionally give way to more expansive rooms which are a showcase of visual flair. The developers have also mercifully colour coded the obstacles, meaning that you’ll be able to foresee their arrival more reliably while developing a healthy aversion to the colour yellow. The 3D effect is also perfectly calibrated, giving even less excuses to blame faulty perspective for crashing. 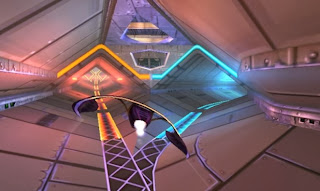 Furthermore, levels are divided into laps and the game is all about achieving the best time. This, coupled with a checkpoint system based on a time penalty, makes the game much more accessible to casual players who are easily irked by constant restarts. While the loading times at the beginning of a level are on the long side, there is almost no delay between a crash and a respawn at a checkpoint so there’s no fatigue after a few too many mistakes.

In addition to beating the par times, rewards are also provided for not crashing, using the turbo for the entire course and not touching a wall, offering a variety of different play styles for each level. The latter two prove to be fiendishly difficult, requiring a high degree of reaction time and precision respectively. Casual players need not worry about these challenges to progress, although they do provide a steeper challenge for thrill seekers. 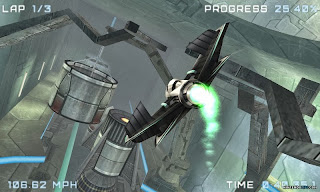 After all these offerings, there’s really not to complain about. The framerate might dip slightly in the later levels and the soundtrack is fitting at best and forgettable at worst. Neither are terribly game-breaking however. Furthermore, the lack of multiplayer or ghost data feels less like a fatal omission and more like icing missing from an already superb cake. AiRace Speed manages to be engaging, fun and wildly addictive as a solo effort alone for casual players and more competitive gamers will find beating the top online times to be a challenging endeavour.

Ultimately, AiRace Speed takes a simple framework and layers it with lavish production values to create a brilliant arcade experience. This is not a game which requires virtual currencies and collectibles to feel addictive – AiRace’s simple gameplay and hearty challenge will be hard for any gamer to resist. And at such a low price point, there’s no reason not to give this one a try.

Vote for your favourite games of the year! Win free games!