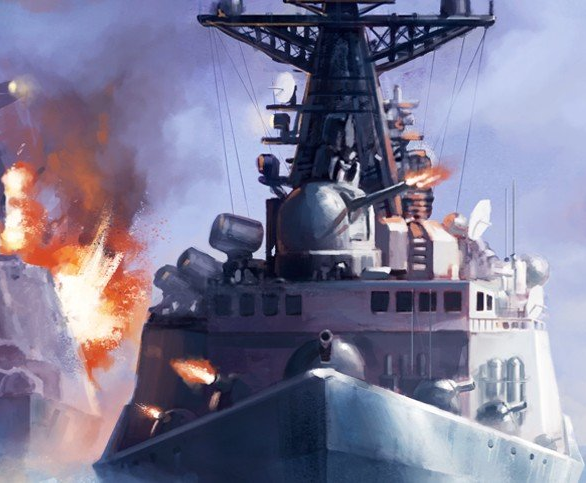 One of my favourite board games growing up was Battleships. Sure, it is a game that is more about luck than anything else, but I still enjoyed the entire flow of the game. It was quick to set up, and matches generally did not take very long. I think almost any kid from my childhood would recall that phrase, “You sunk my battleship!”

You’ve all played Battleships, right? The game where you and a second player secretly position a handful of “ships” on a grid of squares and then take turns to guess where each other’s ships are on the grid? Sound familiar? Great, so I don’t need to explain how the game works (actually, I just did. If you are one of the very few that haven’y played Battleships before, then that above is all that is to the game).

Your interest in the source material will greatly impact on whether you enjoy Sea Battle, which is a DSiWare title that is directly pulling from the classic board game. For better or worse, the mechanics are the same, relying heavily on luck. Once you learn the most common and effective tricks, such as directions and lengths of the various ships, there is not a lot else to it.

That is probably the biggest weakness to Sea Battle. It is very approachable. The rules are simple and even younger players can pick it up with almost no learning curve. With Single Player, Network Game and Mission modes available, you do have a few options when you play. The biggest disappointment of the three is the Network Mode, which is a local multiplayer mode that requires both parties own a copy of the game (so… not really a Network Mode at all – ed). A truly online experience you could play against friends or just random others would have given this title slightly better legs. 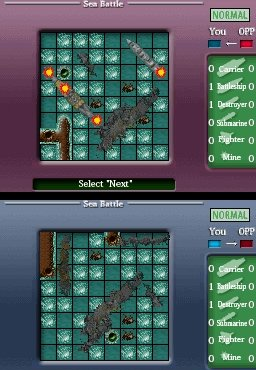 Single player has two sub-modes (pun not intended) where you have the true original Battleship style experience with the Classic Mode. This mode presents variable levels of difficulty and a couple of map sizes. The Modern Mode gives you a few more options such as larger battle maps, new combat vehicles and some items in the environment, but the game itself does not get much more complicated. It just takes a bit longer to complete the match.

Mission Mode feels like it has the most potential, but it actually removes a lot of the strategy because you wind up in predetermined locations and have less control over how you want to start your match. There are only four levels as well, which is somewhat disappointing.

Had the presentation values been better, there might have been a bit more to take from this. Neither the visuals nor the audio give you any particular reason to be invested in the game. Everything is clear enough to see what is happening, but it feels uninspired at best. I enjoy video game versions of board games in part because firing up a game of Monopoly is much quicker than setting up the actual physical game. The actual game of Battleships doesn’t require more than a pen and piece of paper per player, so there is no time savings to be had playing a video game version of it. The biggest advantage to Sea Battle is you can play by yourself. The traditional board game requires a second player, so if you really love Battleships, this at least gives you a quick chance to play with a handful of different options.

These kinds of traditional luck-based board games have a mixed audience. Honestly I would prefer a bit more strategy in mine, but I have enough fond memories of Battleships with my friends as a kid to give Sea Battle a bit of nostalgic credit, but beyond it is a difficult game to recommend to most people.

Review: Child of Light (Xbox One)