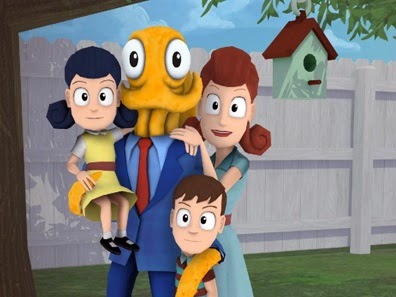 Octodad: Dadliest Catch’s premise is, at its very core, inherently stupid. Playing as an octopus is already silly enough, but stuffing him into a cheap three-piece suit and tasking him with living a normal life all while continuing to pass off as a loving father is insane. Yet, developer Young Horses has pulled it all off. While there will undoubtedly be complaints from those who simply look at Octodad as a game (and nothing more), there’s a heartwarming story to be told, if you’re willing to take the time to look for it.

But let’s not get crazy or anything. Octodad still centres around the hilarious exploits of an octopus, who has managed to live a relatively normal human life, despite being blessed with eight unwieldy tentacles and a face that only a mother could love. Falling in love? Check. Getting married? Check. Having kids? Yup, he’s done it all, but you would probably be better off not trying to puzzle out the specific details, mainly, how an octopus and a human could… well, you know… 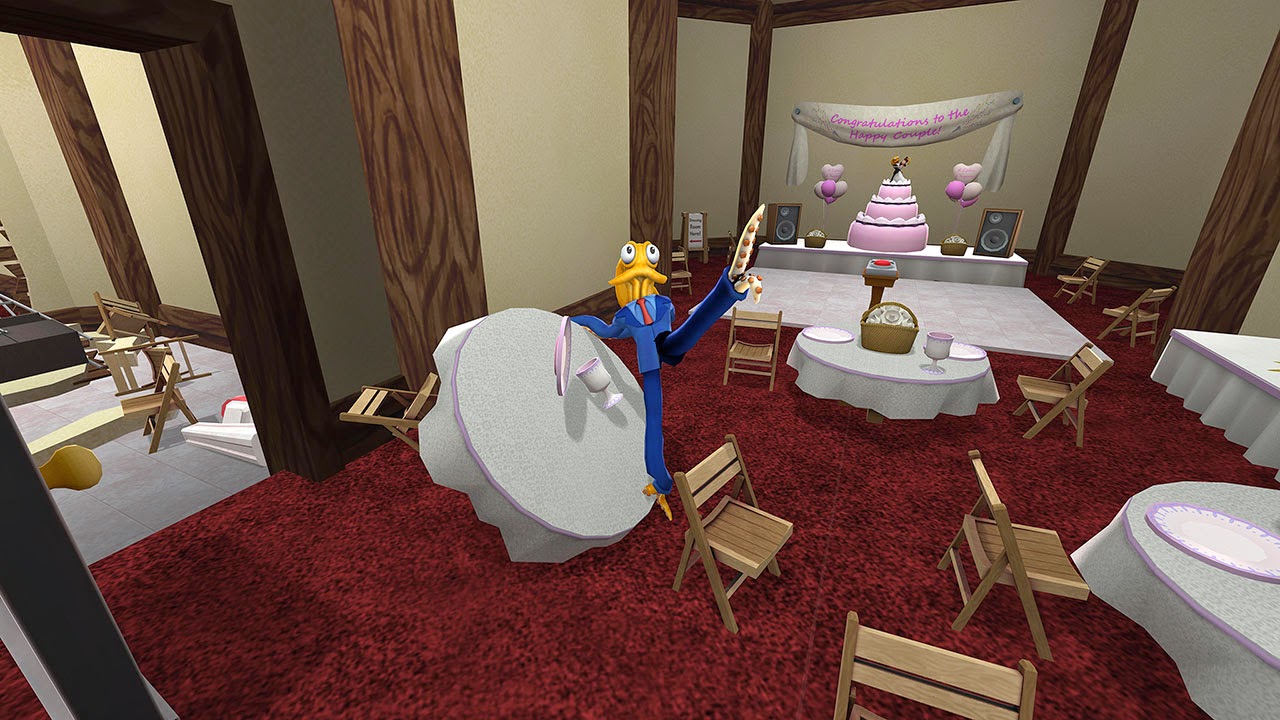 Octodad’s peculiar situation translates smoothly to the controls, in the sense that you’ll immediately have trouble keeping him on a straight path. The controls map his legs to each trigger, and his right arm to the thumbsticks, which also control the legs when you’re moving him around. This is where much of the enjoyment comes from; something as simple as making a cup of coffee can result in a mess of broken kitchenware, and as an example, when I was trying to get “dad” to grill up some burgers for his family, he accidentally hit his wife with the barbeque cover while burning his tentacles. A bad day for the sea monster, really. To top it off, you can choose to play the game cooperatively, which has you splitting up the limbs with one or more players. Even the most communicative players will have Octodad flailing around on the floor for a few minutes, and it only adds to the level of enjoyment.

As unique as the game’s premise and setup is, Octodad follows a relatively simple structure. The game is split up into a handful of levels, all of which take place over a single day in Octodad’s life (except for the hilarious prologue, which takes place during his wedding day). It’s all fairly linear, with a handful of objectives, to complete, and the occasional boss to beat down. Bosses? You ask? But this is a game of domestic bliss, is it not? You see, while Octodad has managed to dupe most people into believing he’s an average Joe, one unrelenting sushi chef has made it his life goal to reveal Octodad’s true identity (and, one would assume, turn him into an appetiser). Frankly, this is one area where Octodad stumbles more often than he should; the reluctance to break away from traditional gameplay mechanics and structures is understandable given that it does come from a relatively inexperienced developer, and it doesn’t hurt the game for the most part, but I can’t help but wish the team took on the challenge of pushing boundaries even further.

Thankfully, the PlayStation 4 release has benefited from the handful of updates and tweaks that the PC version has already seen, which removes a lot of the frustration. Many of the stealth sequences (yes, there are stealth sections, and they’re hopeless) have been redesigned or completely removed, and a few mini-games and other distractions have been added in return. One particular event, which tasks Octodad with retrieving a mango soda from the top of a pile of crates, has been completely redesigned, making the entire ordeal much smoother in the process. This scene is infamous among those who have played Octodad… and it was not without good reason, so I was glad to see the developers tried to improve things like this for the console release. 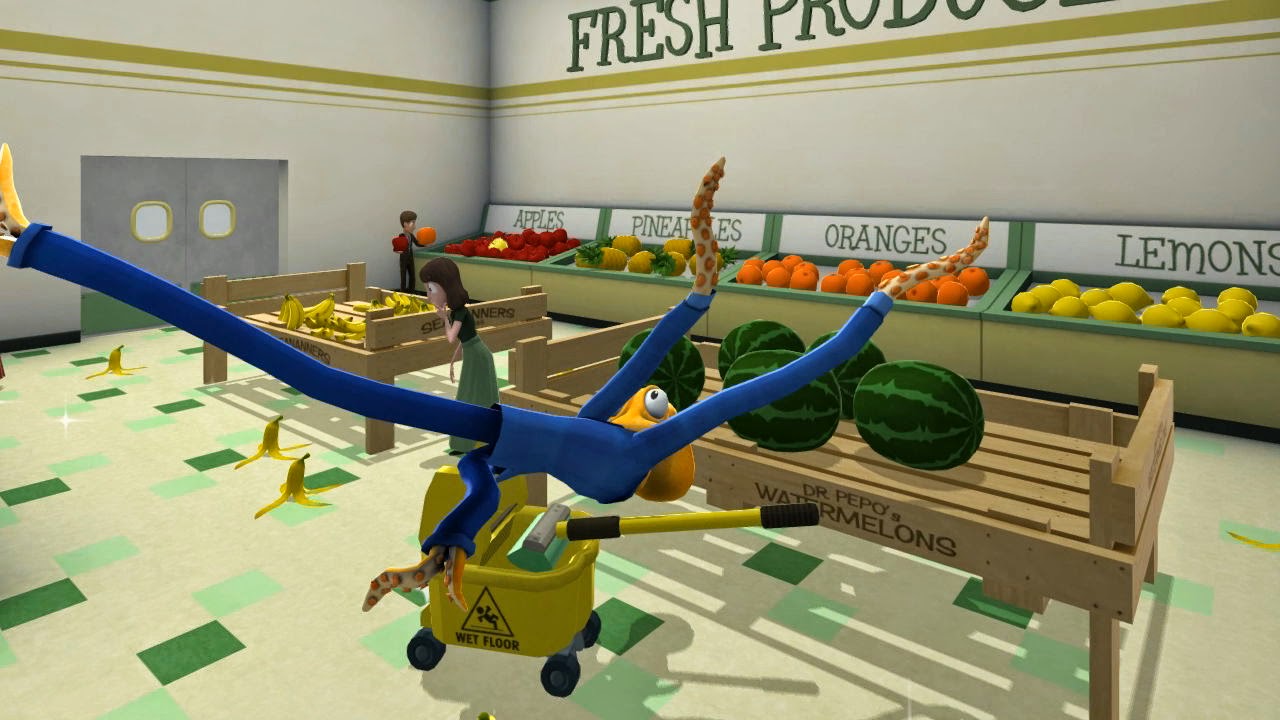 But what really brings Octodad together is the well-written story and characters, which may be surprising, considering that Octodad himself only communicates through series of incomprehensible blurbs and gurgles. With such a ridiculous premise, there’s always the urge to question just how over-the-top everything is, but the game is smartly grounded in a rather ordinary world. The developers aren’t worried about crafting contrived answers to explain how Octodad moves around or how he has managed to fool his entire family into thinking he is normal; they are content with letting you fill in those answers for yourself, and the game is much stronger for it.

There’s also the plight of Octodad himself, which hit me much more than I thought it would. Sure, it’s easy to get caught up in his never-ending series of stumbles and general clumsiness, but when you look at it, Octodad is truly sad and afraid, and I couldn’t help but feel sorry for him. Here’s a ‘man’ (I use that term loosely) who loves his family more than anything else, and will go to extraordinary lengths to keep it all together, even if his secret is no more than a few mistakes away from completely unravelling. While most people would like to think that Dadliest Catch is simply a means to deliver some laugh out loud moments, I’d like to think that Octodad is not much different from me or you; he’s just a guy who wants to fit in, and is afraid of being outcast should his secret be revealed. At one point of our lives or another, we’ve all done something ridiculous or kept something about us secret for the sake of feeling included; can’t we say the same thing about Octodad?

Still, even if you don’t subscribe to that particular analogy; that Octodad is code for anyone a little different that needs to figure out how to act in mainstream society, there’s still a lot of fun to be had here. Even when the overall challenge of living a day in Octodad’s shoes bears too much weight, the game is amusing enough to quell most of the frustration.