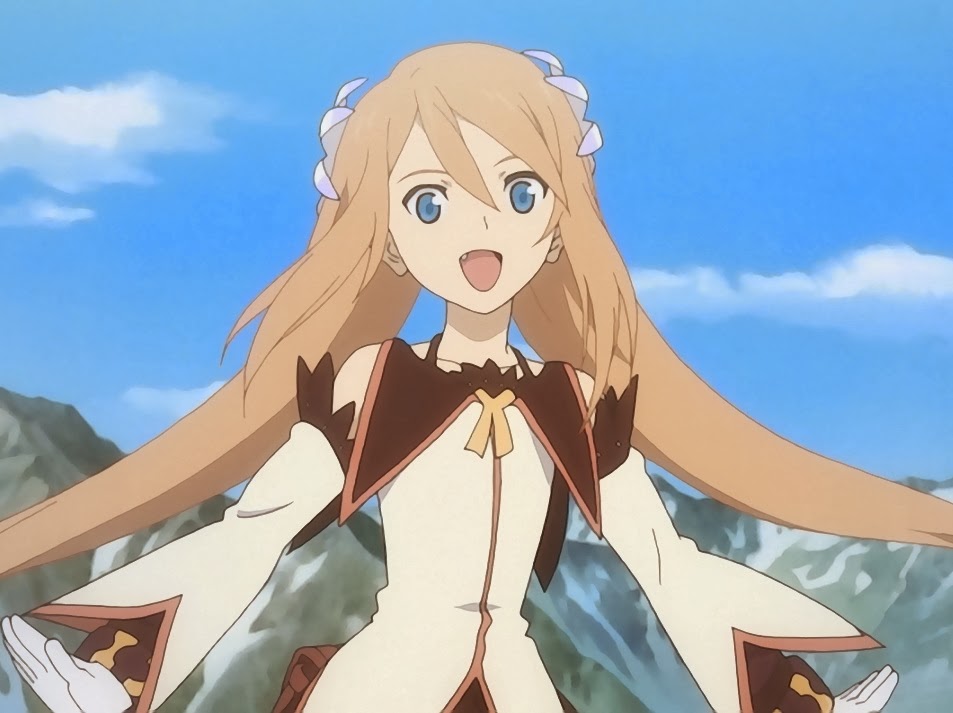 Tales of Symphonia originally released at a point during which JRPGs were classically turn-based and text-heavy affairs. Aside from the fact that it had considerable marketing behind it, many claim Symphonia was a success because it stood out. It had voice acting, multiplayer co-op, a three dimensional world, no random encounters, a real-time battle system and other such splendours that were only highlighted by being released on the RPG-famished GameCube.

The game is now seeing a re-release on the PlayStation 3, though. At Digitally Downloaded we would never be crazy enough to suggest the console doesn’t have a great range of JRPGs available on it (not to mention some of the absolute best JRPGs ever made). Tales of Symphonia’s HD revision doesn’t entirely go toe to toe with those modern equivalents a decade later, but its superb handling of the action RPG formula has ensured its continued livelihood and relevance nonetheless.
It’s quite easy to see why Tales of Symphonia is among the most beloved games in the Tales franchise. Despite being originally being chastised by critics for being overly cliché, it’s the way the writers at Bandai Namco executed the storytelling that makes it feel so much more compelling than the fairly safe popcorn entertainment it actually is. 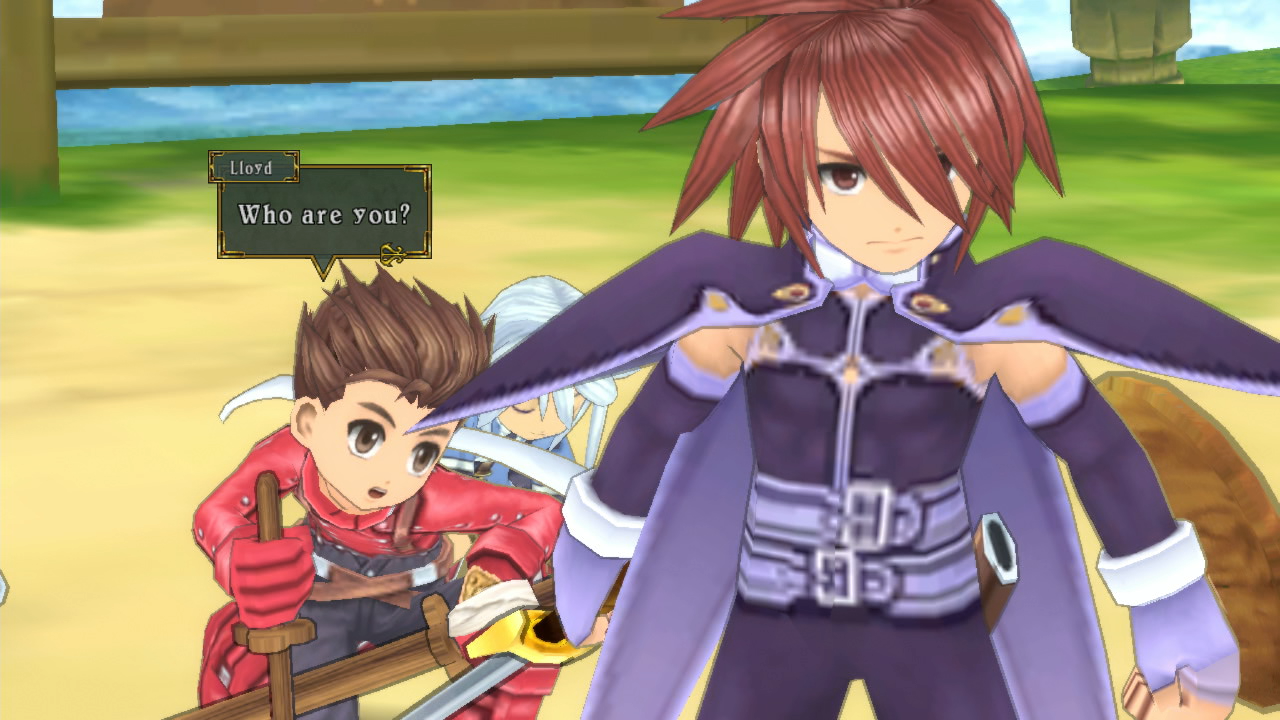 Symphonia is primarily about the characters. Protagonist Lloyd Irving is in many ways your standard foolish hero with a heart of gold. More vitally, he’s an affable character from the outset and his flaws only make him all the more engaging. His shortcomings come off as justifiable for his age or morally founded regardless of naivety. When he’s particularly out of line or the situation demands it, he’s not above trying to perceive the world from more than a black and white view. His personal growth is discernible without coming at the expense of his initial charm.

The other character archetypes are just as transparent but have their own inadequacies and one can’t help but smile through all the banter between them. Even the less interesting folks are able to drag out the likable qualities of the others through the Tales series’ trademark optional skits. Speaking of which, said skits, which pop up from time to time as a random dialogue between two or more characters and are, as I said earlier, optional, do a rather natural job of communicating the next objective without being abrasive about it and allow the player to meditate on the ongoing plot points.
The lovable characters and memorable world meld together to mask what is undeniably a standard fantasy plot. You can see plenty of twists coming a mile away and yet this rarely sabotages the adventurous vibe evoked by the narrative or reduce their impact in practise. At times it will come off as a generic anime, but I’d argue there’s merit in these moments existing. At the very least, Symphonia excels at balancing serious and light-hearted affairs and presents a better paced plot than even many modern JRPGs. 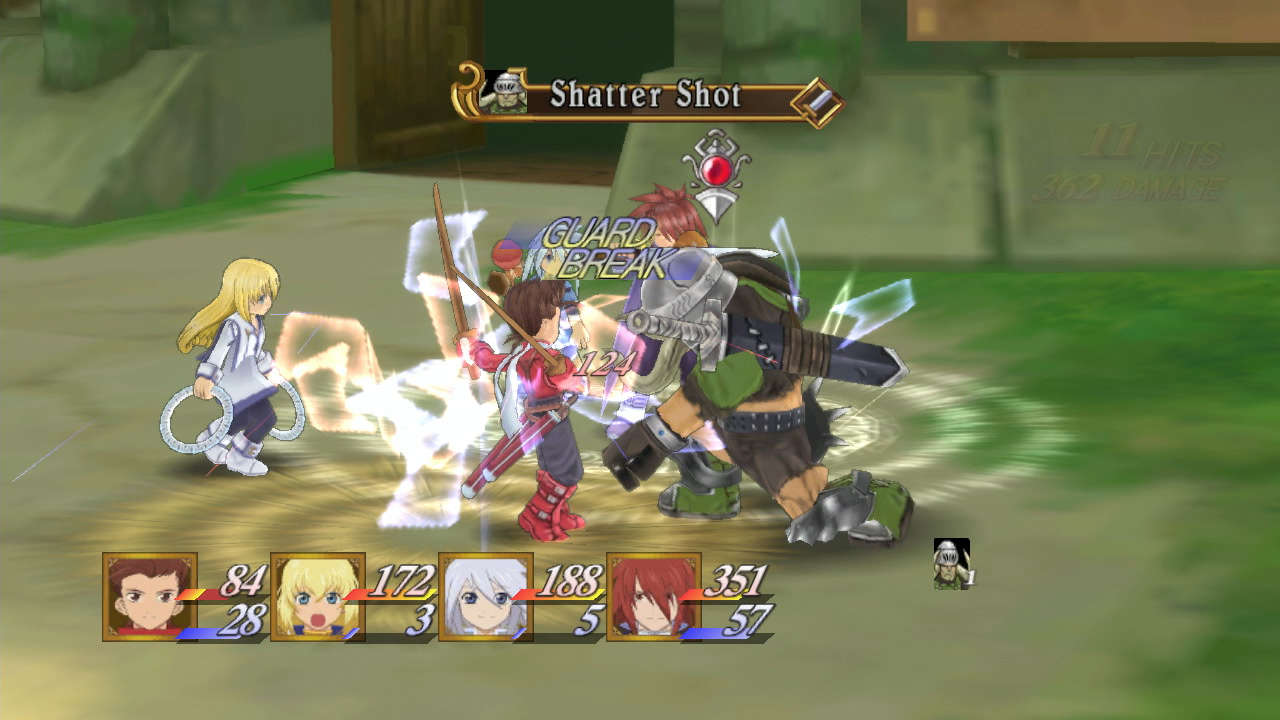 Those who aren’t traditionally fans of JRPGs may find themselves drawn in by the real-time battles that offer up more than mere hacking and slashing. There are plenty of strategies that need to be employed to bring out the true strength of your four person team and there’s more than sufficient room to discover combos and capitalise on enemy weaknesses. It’s a relatively easy experience for genre veterans, but there’s plenty of hidden depth to be discovered and aforementioned intricacies like local multiplayer give Symphonia’s hundreds of bouts exceptional longevity.

Symphonia may be the embodiment of why the Tales series has been a success for many years. The plots may be serviceable at best, but the characters, settings, memorable moments, and impeccable sense of adventure tend to override this. Throw in combat that makes grinding often seem appealing and you’ve got both the gateway drug of action RPGs and something that hardcore fans will still find value in revisiting.
The stellar adventure in Tales of Symphonia isn’t the only reason for purchasing the Chronicles though, as its sequel is also available. Then again, there are those who would have been just fine without its inclusion. 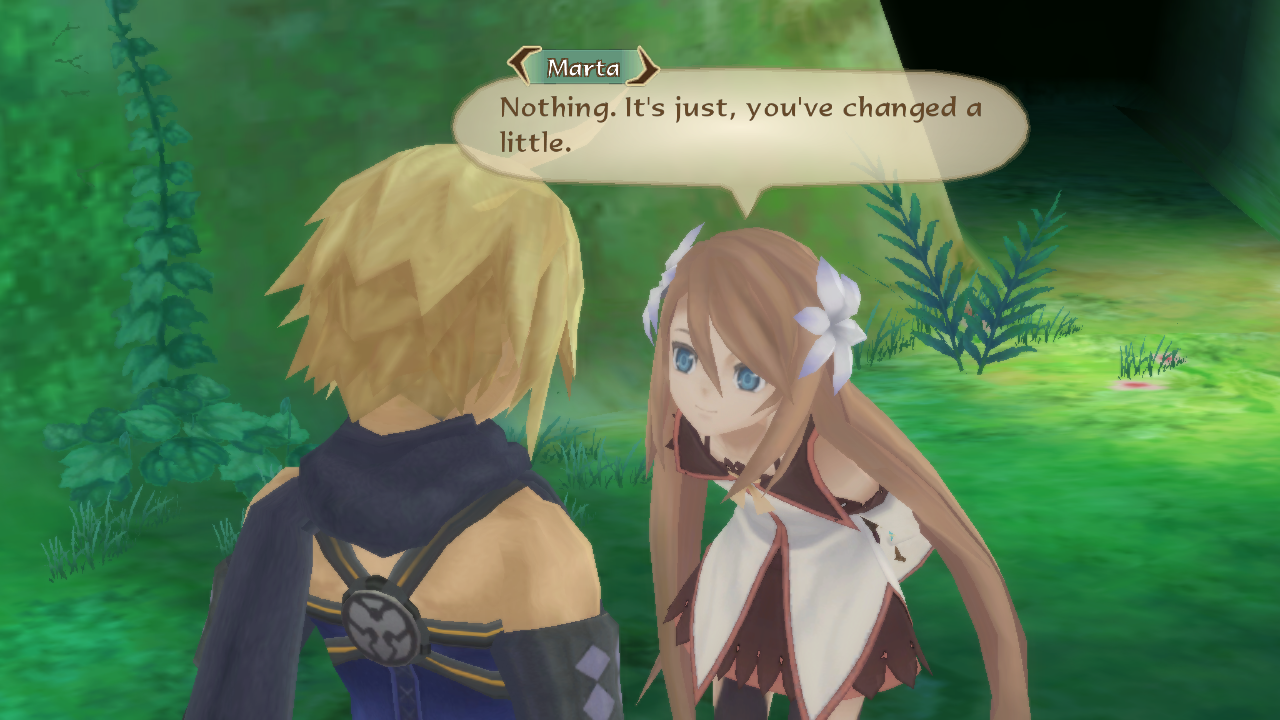 The developers of Tales of Symphonia’s sequel, Dawn of the New World, were not content with sticking to its predecessor’s formula and this is instantly observable. The likable cast of the previous game returns but is heavily marred by comparatively flat performances and is sidelined in favour of two new protagonists. The main one, Emil Castagnier, is a very controversial fellow indeed.

Dawn of the New World has the unenviable task of trying to build sympathy for a meek boy ostracised for his misdirected hatred. Whereas the original Symphonia used the occasional cackling, caricature villain to bolster the depth of the protagonists and legitimate foes alike, Dawn of the New World elects to expend its character resources to develop the one with the fewest immediate redeeming features. The result is a story that fights an uphill battle by taking the newcomer no one is predisposed to enjoy and making him the centerpiece. A lot of the original game’s charm is thrown to the wolves from the get-go.
Emil is not buffoonish but lovable like Symphonia’s Lloyd Irving was. Rather, his sole would-be admirable feature is inspired by something the viewer can debunk before even playing. It doesn’t help that many of his early triumphant moments are inflicted upon him as a plot device instead of being earned in a way that solidifies his metamorphosis. Presumably, most players would be unwilling to deal with a main protagonist of a combat-based RPG that spouts such verbal gems along the lines of “Aw, I don’t wanna fight” without this, though. 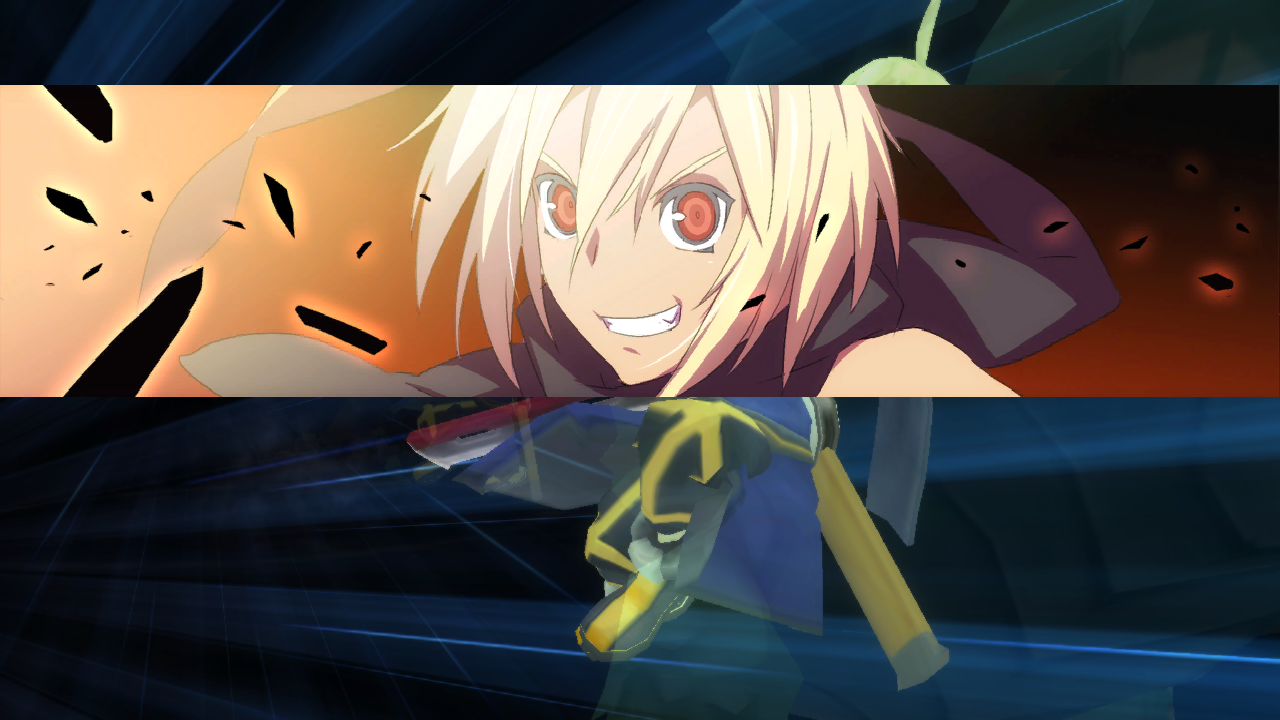 With that said, I realise I’m a minority in having a penchant for characters remotely similar to Final Fantasy XIII’s Hope, but I do like Emil. At times, he’s highly relatable and the ways in which he suffers are unexpectedly realistic.
Appreciating him, however, becomes a Herculean task when the developers decide to chronicle his growth by presenting a flashback to the same matter-of-fact sequence (that the player watches unfold in real-time, mind you) a dozen times in the first chapter. It is quite possible to convey emotion and mental transformations using subtle gestures, muttering under the breath, presenting a believable inner monologue, etc. It’s not just insulting to the player’s intelligence, but it actively lowers expectations and causes you to overlook the sequences that are subtle and worthwhile.
It’s hard to identify whether the game’s general simplification was due to different designers, time restraints, or some obligation to appeal to the “Wii audience”. Even playing on the PS3 though, it reeks of being an early generation Wii title wherein marginalising certain facets and shoehorning in motion controls was the norm. The game is also too often bogged down with strange in-character tutorials that feel unnatural and a surplus of incoherent information. 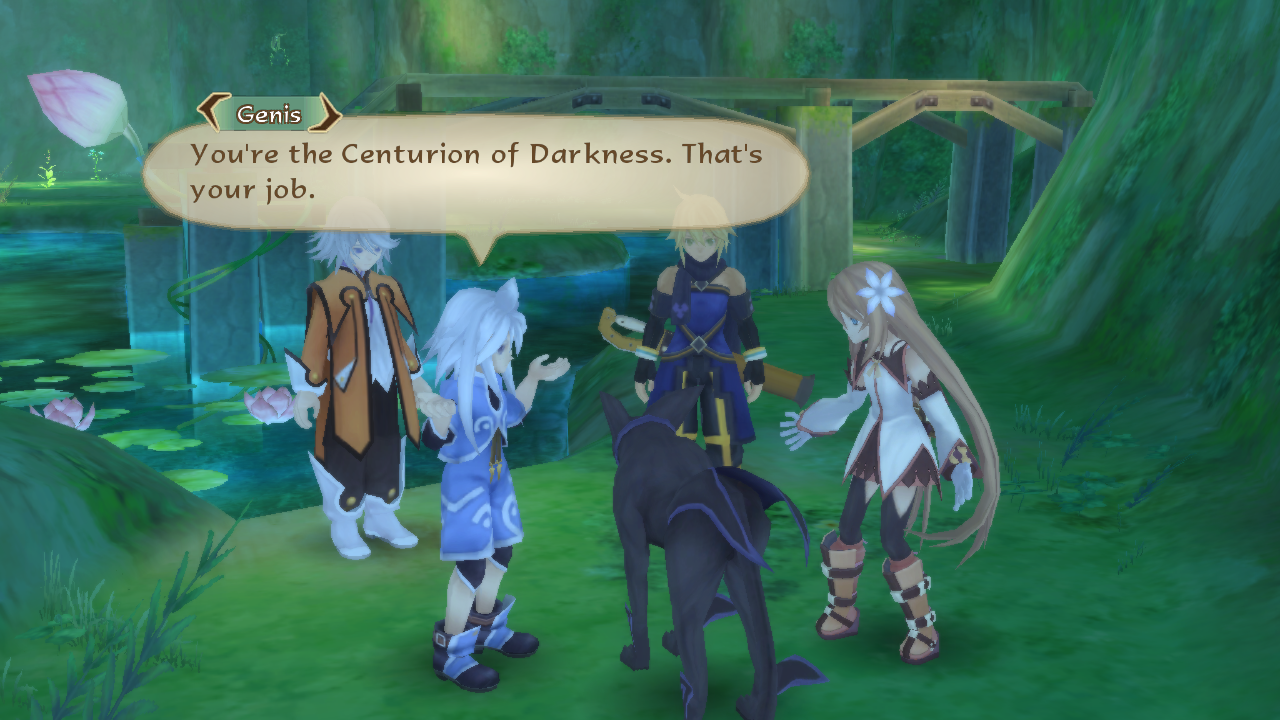 While Symphonia didn’t have the freedom some believe it did, it certainly had more exploration to offer than Dawn of the New World, which emphasises automatic movement via plot and strips out the exploration-heavy world map entirely. If Tales games aren’t about the story, this one seems to have missed the memo and highlights the aspect people are least likely to be enamoured with.

Naturally, the battle system is still intriguing, not unlike its predecessor. In certain regards it’s arguably even better. It’s just disappointing that the focus has shifted onto collecting monsters when the lot of them are fairly generic and don’t contribute nearly as much as legitimate characters do. It’s not an outright terrible fit for a Tales game and has certainly met with success in other games before. It feels noticeably out of place and would have been better served being fully realised in its own title instead of being unceremoniously tacked onto a sequel to a beloved existing story.
Dawn of the New World is not the nightmarish sequel some painted it as. It is, however, one that stresses the importance of plot over characters and then delivers a vastly inferior narrative and characters that take time to appreciate. The average player will be more likely to trudge onwards due to sheer curiosity rather than forging a bond with an ensemble of well-written archetypes. 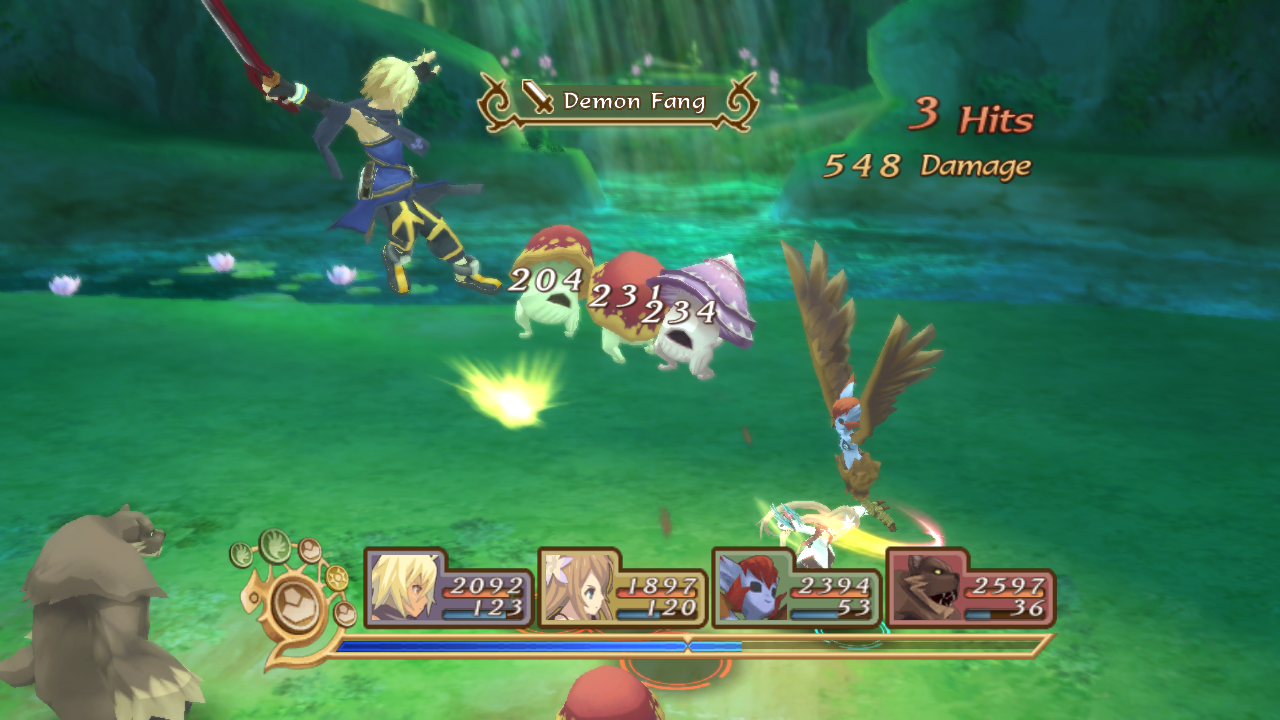 As a complete high-definition package, Tales of Symphonia Chronicles doesn’t make a great deal of strides. Its lack (or at least toning down) of the original’s trademark cell-shading will rub many aficionados the wrong way. Features like the addition of a Japanese voice track (and, by extension, audio for the optional skits since there is none for the English dub) are worthwhile enhancements but the value of such things is highly subjective, particularly when this is one of the rare instances where the English dub is wonderful.

The real value will be for those have no experience with either title and want a pair of competent JRPGs to sink their teeth into. Tales of Symphonia Chronicles may only offer up one game of utter brilliance, but it carries the package just fine on its lonesome.