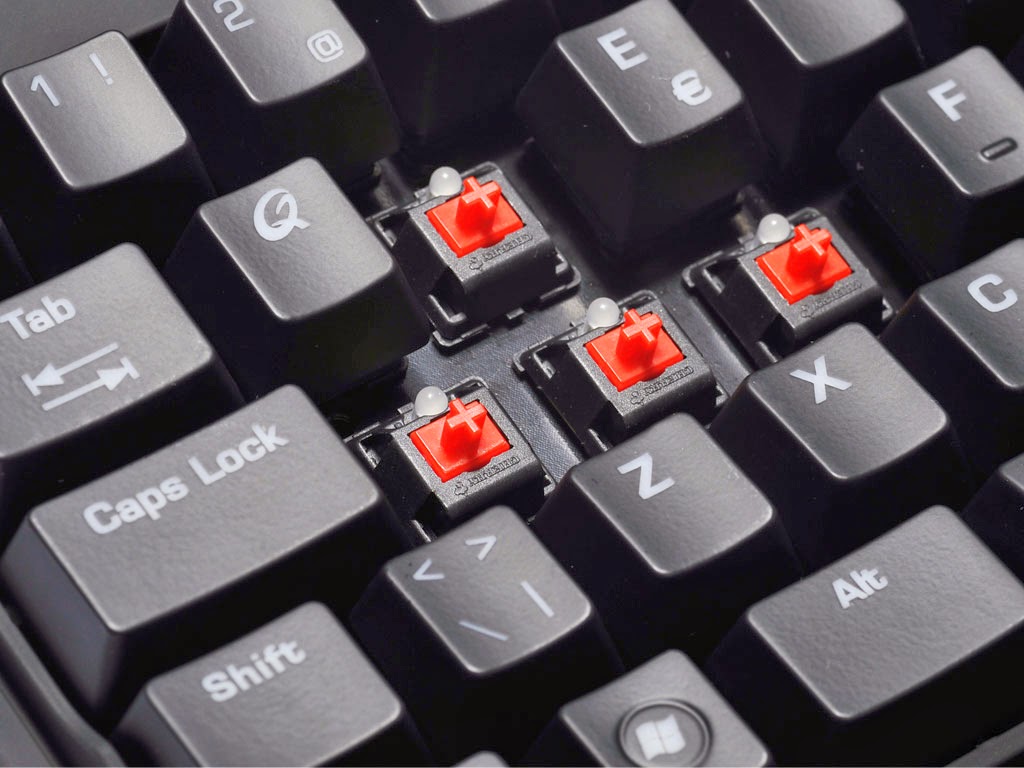 The reason for the headache is clear enough. Mechanical keyboards, QPAD’s MK-85 included, are known and loved for their less-than-subtle properties of clickety-clackety-clack. Unlike quieter keyboards based around rubber-dome technology, every key on a mechanical keyboard sits atop its very own spring-loaded mechanism. This leads to longevity – typically, keys are rated for 50 million keypresses – as well as a comforting sense of quality. If you value the time that you spend with your computer, chances are that you’ll eventually learn to embrace the noise.

QPAD have equipped the MK-85 with industry-leading Cherry MX Red keys. This particular loadout isn’t for the clumsy: strokes are registered with a mere 45g of pressure, so typing is fraught with mistakes. But these keys are sublime for gaming. They have a positivity and quick response that’s hard to match, and they’re light enough for finger strain to become a thing of the past. However, if the default option isn’t for you, you can choose instead from versions with Blue, Brown or Black switches. Each colour-coded keyset provides a very different feel so, if you’re unsure, get yourself to a physical shop and try them out. But trust me on this: Cherry Reds are awesome. 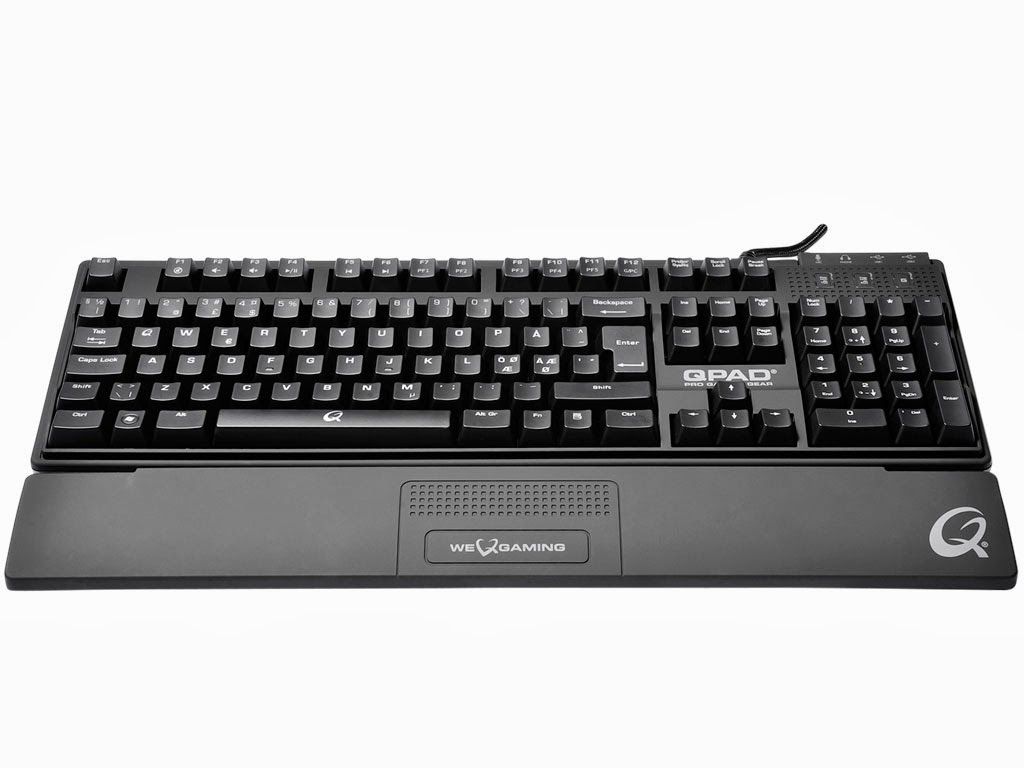 The keyboard itself is a deliberately compact affair, and it shares the same chassis as the bare-bones MK-50 and the mid-range MK-80. However, since this is the top-of-the-range model, the MK-85 packs in an awful lot of extra features. There’s variable lighting, a USB 2.0 hub, 3.5mm headset jacks, a gaming mode to disable the Windows key, five different profiles, programmable macros, full N-key rollover (so you can press multiple keys at once and they’ll all get registered), media playback keys, a gold-plated USB connector, everything.

On top of this, it’s all achieved with the sense of style that we’ve come to expect from the Swedish manufacturer. While other keyboards provide additional keys to manage these kind of extras, QPAD cram it in by assigning secondary functions to existing keys. At first I was sceptical but, after a couple of weeks of testing, I can confirm that it’s an arrangement that works rather well. The upside is that the keyboard retains its clean, no-nonsense profile. The downside is that, well, yeah, a few dedicated macro keys would have been nice. 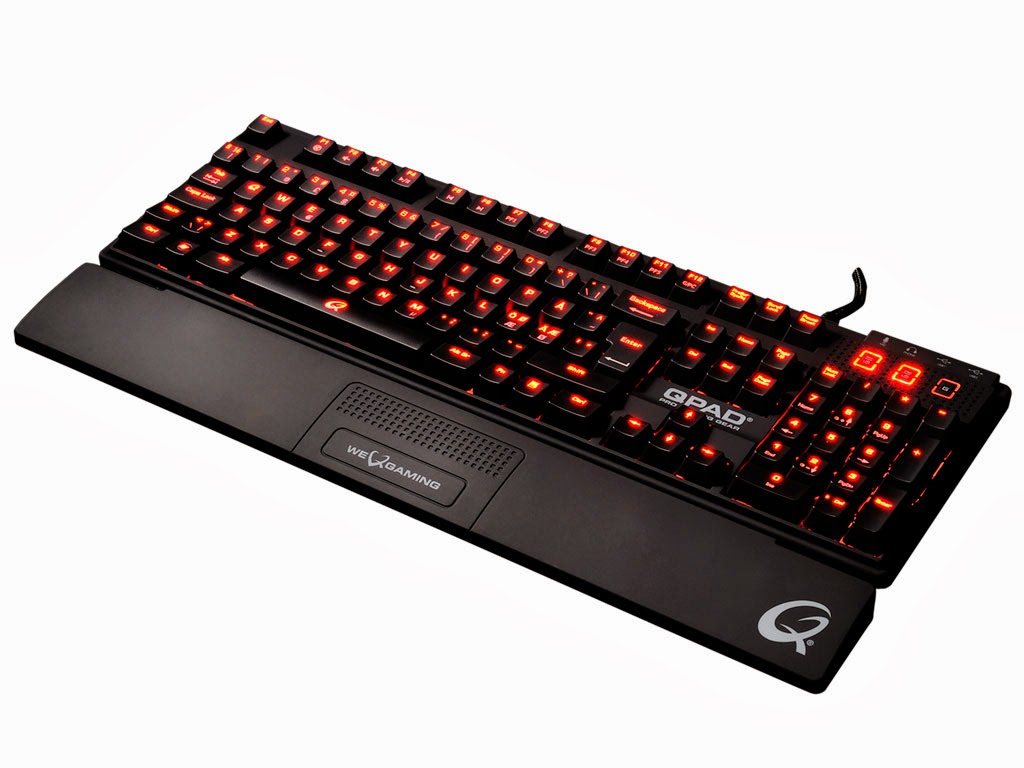 Other features come with a similar list of benefits and drawbacks. The keys are individually lit with a red glow which can be set to any of four settings. This is a great keyboard to use in a darkened room, and it’s certainly fancy enough to draw a few admiring glances. However, the highest settings don’t disable the lighting when you turn off your computer, so you may find yourself unplugging the PC just to be rid of the ever-present illumination. On a comparable note, the integrated headphone port is a great idea but, as it plugs directly into the soundcard, you may have to use an adaptor if you want to keep your desktop speakers plugged in at the same time. Finally, the macro and gaming functionality works well enough, but it comes with ugly software which doesn’t do justice to the standards displayed by the rest of the unit.

So, while the MK-85 isn’t the all-conquering behemoth we were hoping for, there’s no doubt that it does everything. And, in the main, it does it rather well. It fuses QPAD’s minimalist sensibilities with great lighting, passable programmability and that utterly superb Cherry MX key action. Only the steep price and a few design oversights keep it from taking the high-end keyboard crown.

Advance Wars on the Wii U? Don’t mind if I do!