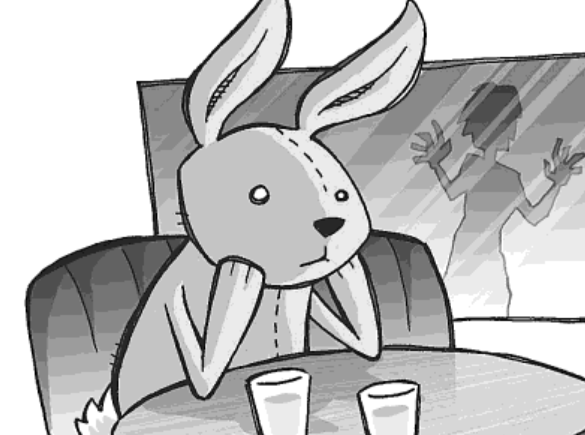 We love Tin Man Games’ iPad apps. It’s a small indie dev that churns out gamebook apps at a frightening rate; it was only a few weeks ago that we were playing Sultans of Rema, and before that Gun Dogs.

So when Zombocalypse landed on the App store, there was nothing that was going to be able to stop me from giving it a crack. Especially since the cover features a bunny with a chainsaw. I like psychotic bunnies. So I started playing, and then I realised that perhaps this isn’t Tin Man Games’ finest work.

Mind you, I don’t blame Tin Man Games for it. In terms of presentation, Zombocalypse Now is great fun. The art is high quality and captures the horror/ comedy vibe perfectly. Given that the lead character is a stuffed rabbit trying to survive a zombie apocalypse, it should be obvious that the game leans heavily on the “comedy” side of things, and the writing is genuinely good fun to match the art work.

I have to make a special mention to the music too, which is one of the most awesome jazzy numbers that I’ve ever heard. It fits the lighthearted tone of the story itself and this is the first Tin Man Games game that I wouldn’t think to play without a good pair of headphones. 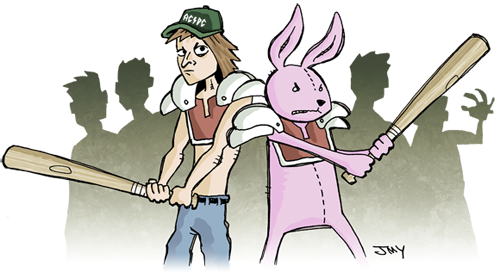 So if the writing is good, the art is good, and the music is good, why is it that I’m not a fan of Zombocalypse Now? That’s simple – the game is a pure choose-your-own-adventure, rather than the gamebooks that Tin Man Games typically produce.

In this book all you do is make choices to dictate what happens in the next scene. “To turn left, turn to page 10, or to turn right, turn to page 110”; that kind of stuff. Compared to ‘proper’ gamebooks which have combat and dice rolls and things, Zombocalypse feels more limited than other Tin Man Games releases. This is of course how the physical book works, so it is hard to blame the developer for it, but when I first opened the app I was surprised indeed to find that there were no dice rolls, and quickly afterwards that surprise turned to disappointment.

Limited as they were, the dice rolls in other gamebooks introduced an random element to the experience that was both exciting and involving – it made each game a somewhat unpredictable experience, and it was less passive than simply flipping through pages. Gamebooks are more involving experiences, in other words, and better suited for the video game format.

So this isn’t the finest work from Tin Man Games, but if you’re a gamebook addict, then the sense of humour might tide you over until the next one can hit the App store… hopefully with dice rolls put back in.