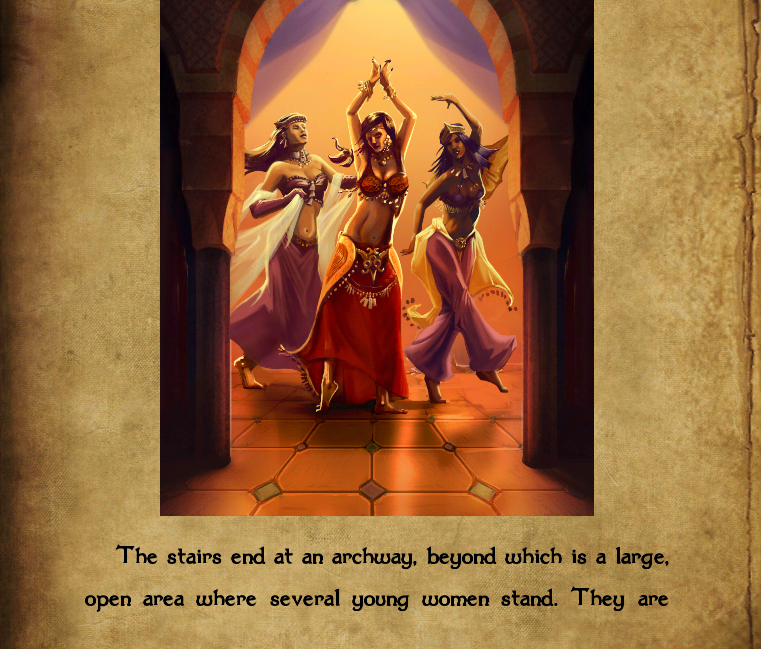 I once wrote a gamebook based on my life. It went like this:

What would you like for lunch? If cheese, turn to page 23. If sandwiches, you must pass a dexterity check. Ah, it appears you are an inexpert sandwich-maker. You drop them on the floor and lose 2 points from your Self-Esteem. Game Over.

It was a rubbish gamebook. Thankfully, Tin Man Games is much better at it than I am. Sultans of Rema is a standalone sequel to Slaves of Rema, and the ninth in its Gamebook Adventure series. The developer also publishs the e-versions of the legendary Fighting Fantasy franchise, so it’s clear that it knows what it’s doing. Each title takes the basic 80’s solo-adventure template and updates it to a slick mobile experience. There’s background music and beautiful full-colour artwork. There’s a satisfying combat mechanic that involves virtual dice bouncing around the screen. There are even achievements and the option to tweet about your progress. With a game engine this good, there’s absolutely no excuse to go back to the pen-and-paper way of doing things. All that’s needed is a good story. 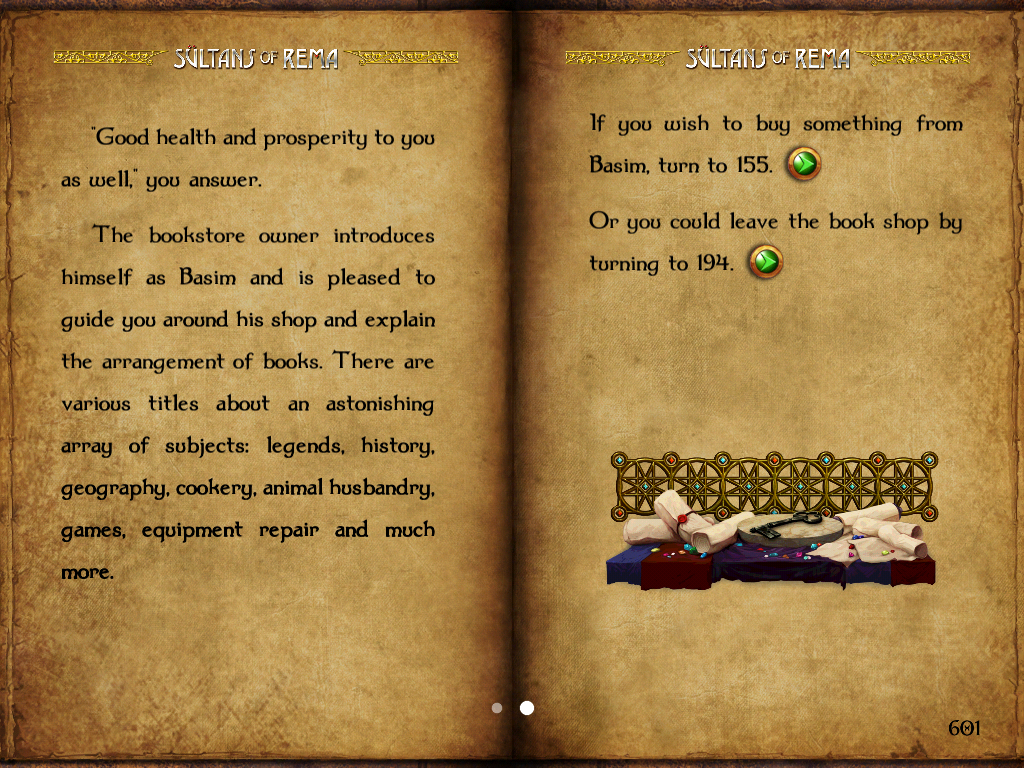 And Sultans of Rema is a good story. It’s an old-fashioned, behind-enemy-lines spy thriller; part John Buchan, part Lawrence of Arabia, part Indiana Jones. Series newcomers may feel a little challenged while the political situation is being established in the opening pages, but things become clear as the adventure progresses. Pleasingly, you’re not out to save the world this time: all that’s required is to deliver a certain document to a certain person in a certain place. On the way, you can expect to encounter shady assassins, crowded bazaars, exotic dancers and treacherous viziers. This is a book that joyfully mines the themes of classic Arabian tales, so it’s fitting that combat takes second place to adventure and intrigue. While the story won’t win any prizes for originality, it’s well-written, pacy and entertaining throughout.

There’s only one issue, and that’s to do with challenge. The game offers difficulty levels ranging from Classic (with limited bookmark saves and harsher starting conditions) to Casual, which allows you to flick backward and forwards as you please. As an old gamebook hand, I breezed through the hardest difficulty with bookmarks to spare. It’s a shame, as this meant that I never felt the sense of tension that goes hand-in-hand with a really fine spy caper. Maybe the dice were smiling on me. Still, there’s every reason to try again, as the game structure branches widely and there’s plenty of content that never reveals itself on the first play though.

Sultans of Rema is good, simple fun. With more tension and fewer clichés it could almost have been an essential title. Nevertheless, it’s a fine addition to the Tin Man catalogue and the perfect way to spend a couple of happy hours adventuring under the desert sun.