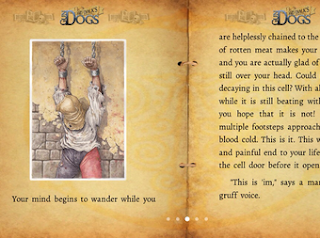 If you’ve never played a gamebook, then you’re probably younger than I am, but for the children of the 80’s, the gamebooks were our single-player RPGs when we weren’t able to get a group together for some Dungeons & Dragons. In the absence of narrative depth in the early PC RPGs and the likes of Final Fantasy and Dragon Quest, we instead read (and played) Fighting Fantasy and Lone Wolf. Tin Man Games has made a specialty out of the gamebook genre on smartphones and tablets – a natural platform for digital reading. What’s especially exciting about these digital gamebooks is that they’re often NEW books, and the prospect of new gamebooks is enough to excite the nostalgic amongst us. 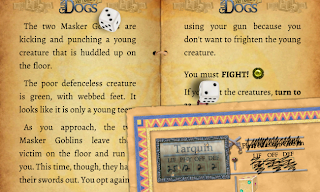 As with the best classic gamebooks, Gun Dogs is unforgiving – certain decisions can result in a Game Over for your player very easily, and though the game offers a “casual” option where you can use bookmarks to go back and reverse decisions, traditionalists will stick to tradition and start playing again to make a different sequence of decisions. Regardless of the way you choose to play, chances are that once you start reading Gun Dogs, you’ll want to see everything that it has to offer. Partly because the art work scattered through the pages is masterful, but also partly because the writing is amongst the best pulp fantasy you’ll ever experience.

This is a tale of high adventure, deadly duels and redemption; you play as a resistance leader who has been captured by the despotic leader, and via a magical choker compelled to complete a mission for the leader, else the choker will tighten and you’ll die. It’s a long quest that you’re forced to take on, and it’s a difficult one, with a lot of hostiles to either negotiate with or defeat in combat. The narrative is, of course, utterly filled with cliche, but it’s done in a charming and self-aware sense that makes it both quaint and charming. 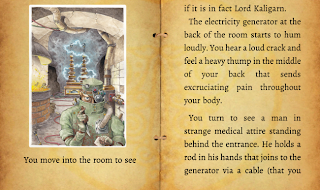 There’s a lot of reading to do in this book, and unlike the recent Lone Wolf effort, Tin Man Games has decided to minimise the distractions from the reading; combat is done through simple dice rolls, and other RPG elements such as inventory management are no more complex than they were in the original gamebooks. I prefer this approach; I’ve got RPGs for when I play an RPG, when I want to read a gamebook I don’t want to be messing around with 3D combat systems.

In some ways I wish that Tin Man Games had won the Lone Wolf license, because that was my gamebook series of choice when I was a youngster and I’d love to have a Lone Wolf app that I didn’t feel the urge to delete after an hour’s play. But then as long as it’s producing original gamebooks of this caliber I’m not exactly going to complain.

The 24 Games of Christmas! Day #9: Thomas Was Alone