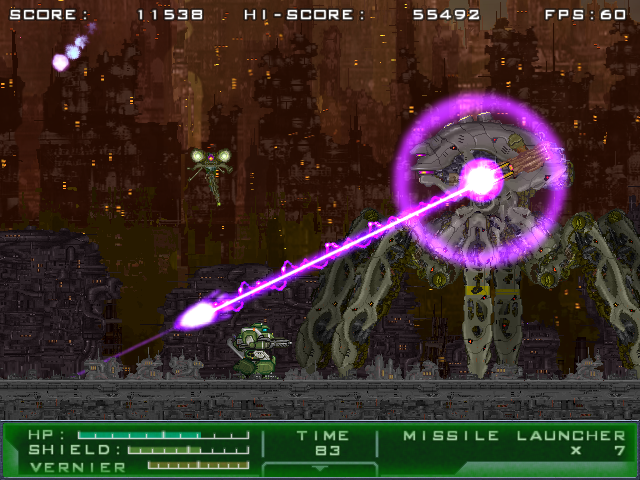 It’s funny to think that Gigantic Army is set in an alternate reality where by 2009, mankind has already invented the warp drive and dove headfirst into interplanetary warfare. The game itself feels like it belongs in an alternate reality where the Nintendo 64 and Playstation didn’t catch on and gaming never moved past sprites. Gigantic Army is a mech-based action game which comes from dojin soft developer Astro Port and is localised and published by our good friends Nyu Media. It plays very much like a passion project, combining sharp shooter gameplay with an interesting premise and a solid design ethic.

Gigantic Army is easily compared to the Metal Slug series as controlling the mech in the former feels like piloting the eponymous tanks in the latter. You move with the left and right buttons and aim your cannon with up and down, a somewhat cumbersome control scheme which effectively conveys the difficulty of driving an enormous vehicle while aiming its cannon. Players are given a choice between three weapons and three subweapons, with various loadouts catering for differing play styles. The keyboard controls can become cramping after longer sessions so players with gamepads are advised to use that option – all the keys are automatically mapped and it controls like a charm. 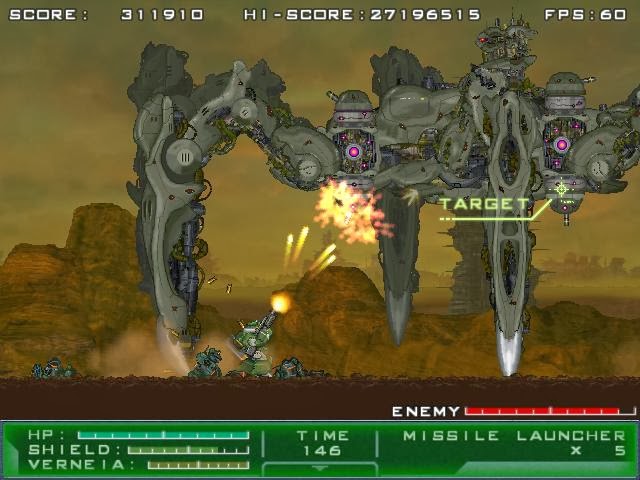 Levels are sidescrolling affairs with light platforming elements, but they are largely straightforward without much leeway for exploration. In hindsight, the game is quite difficult and players will get game overs even on the easiest difficulty. While playing however, the difficulty level is unnoticeable and seems fair for a game of this genre. A run-and-gun game wouldn’t be complete with an eclectic array of enormous boss fights, and Astro Port certainly doesn’t disappoint. There are no less than two per level, each with distinct and complex attack patterns. Players will constantly be bombarded with explosives, lasers and what seem to be giant military-grade scissors and learning the various ways to dodge each onslaught is highly satisfying.

The game’s story is also a cut above standard fare. In between levels, you’re able to read the log of an engineer which gives background to the interspecies conflict that frames the game. If there’s anything that can be learned from Japanese sci-fi, it’s that giant robots and political intrigue are a winning combination, and Gigantic Army uses both to excellent effect. There are even a few twists along the plot which will surprise players, and it’s nice that there’s some context to balance out the game’s carnage. 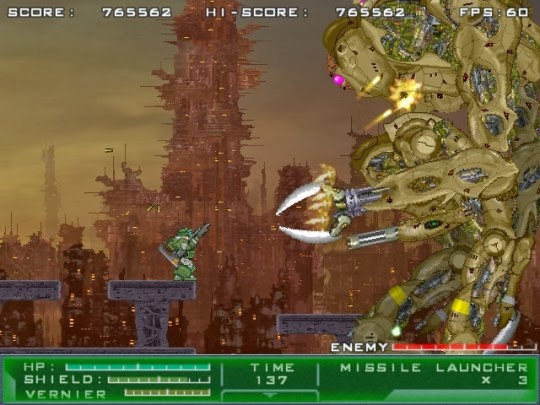 Visually, this game is stunning and the team at Astro Port clearly know what they are doing when it comes to sprites. The backgrounds are complex and multilayered, conveying the sense that you’re just a single foot soldier amidst a huge battleground. Enemies and bosses are animated with great detail and there’s a certain awe factor when a screen-sized enemy robot slowly advances towards you. The music is somewhat bland however, featuring a mix of bass heavy metal and techno but you’ll rarely get to hear it over the environment exploding enthusiastically around you.

All and all, Gigantic Army is a great new entry for Astro Port’s line of shooters. If there was one complaint to be had, the game does stand on the short side of the spectrum although there is a refreshing lack of filler. Gigantic Army comes highly recommended to any fan of the run and gun genre – it’s clear that Astro Port put a lot of effort in the game and it comes out in all facets.

Killer is Dead is back on PC