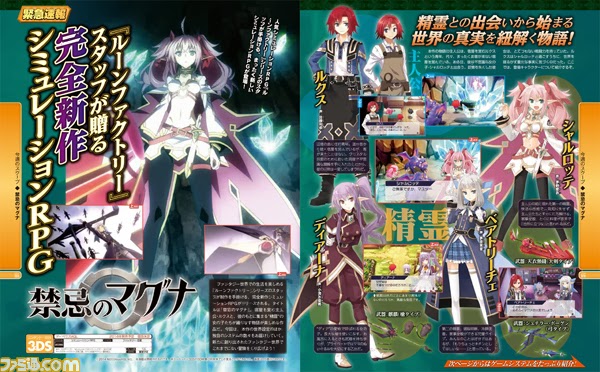 News by Clark A.
It’s well-documented now that long-time Japanese developer, Neverland, went bankrupt late last year. This was despite finding unprecedented sales success with its swan song, Rune Factory 4, which managed to become the fastest-selling title in the series and one of the fastest for the company overall. The situation unfortunately led to the cancellation of a European release for the aforementioned title.
While the fate of the Rune Factory franchise remains vague, Yoshifumi Hashimoto’s (producer of Rune Factory 4) prior statements about the former-Neverland staff “doing great” look to have come to fruition.
This week Famitsu unveiled a new title called Forbidden Magna (or “Kinki no Magna”) from Marvelous AQL, which had published several Neverland titles locally. Few details are known about the project as of yet, but one of the key points was that the developers of Rune Factory 4 are behind it.
Beyond that, the game is billed as being a simulation RPG and will be hitting the 3DS at some point. Some screenshots as well as character designs for Lux, Charlotte, Diana, and Beatrice can be seen in the magazine excerpt above.
Here’s hoping a company like XSEED is keeping tabs on this one.
– Clark A
Technical Editor
Email me at: clarka@digitallydownloaded.net
Share this

Stick it to the Man coming to Wii U