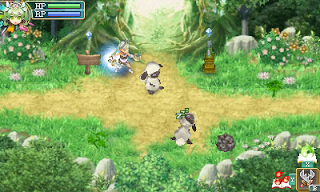 Many will regard Rune Factory 4 as yet another release in the farming meets fighting franchise. While that is indeed an accurate assessment, this particular entry perfects the balance of said components and expands on them with variety that outweighs other major players in the genre. It’s also the most addictive game I’ve played this year besides Animal Crossing and for many of the same reasons. If you’re remotely intrigued by the concept Neverland has been pumping out for several years, there’s no better starting point than the cream of the crop.

Of course, a learning curve for newcomers is somewhat inevitable considering the wealth of tools and activities related to the farmer-adventurer life. Even hours after the opening cutscenes and tutorials, you’re going to absorb titbits of knowledge continuously. Luckily, the developers have divided up the intricacies between character conversations, player experimentation, and a request box that, at least in the early going, offers compensation for learning. Should veterans be weary of explanations, they can skip them instantaneously.
It may initially feel cumbersome to have so many statistics and levels to keep track of, but most should warm up to the system once it becomes apparent you’re rewarded for virtually every action you perform. Even those days devoted entirely to fishing become beneficial towards character growth, allowing the player to maximise productivity through whatever means they prefer (oh great, just what I needed; MORE encouragement to go fishing). You’ll still want to participate in all aspects of the game due to the sheer variety on offer and the individual benefits, but it’s a design choice that respects the player’s time investment.
Better still is the handling of plot progression and player freedom. Rune Factory 4 most certainly has a storyline, but pushing it forward is voluntary to the extent that you can forgo it for several in-game weeks. Your protagonist will even remark on what course of action should be pursued when saving the game in a certain spot, which cleverly ensures you’ll know what to do as time suits you. 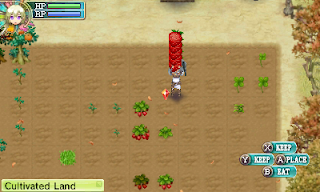 Naturally you’ll want to push things forward at some point since the array of options available for town chores eventually dwindles until you can access better resources, but simply the town-based activities like fishing, socializing, farming, crafting, and cooking should keep you glued for lengthy periods. New to this entry is the ability to date love candidates prior to marriage, which creates deeper engagement (heh) and allows you to take multiple partners for a spin (you had fun with this sentence, didn’t you – ed) before settling down.
The action segments are also quite gratifying, courtesy of tight controls and the power to heavily customise your strategies. Each weapon type has its own characteristics and skill level, encouraging the player to experiment and use rune abilities to circumvent their weaknesses. Better enemy intelligence and more engaging dungeons might have boosted things further, but it honestly feels sufficient in its sometimes button-masher state. It must also be said that moments like riding a sheep smaller than my virtual avatar into the fray against levitating, laser-firing fish is the stuff gaming is made of.
Should either agriculture or skirmishes grow stale, their symbiotic relationship always evens things out; this entry treads the line between routines and action better than ever. What consistently gripped me, though was the relaxing atmosphere and the speed at which you can access locations. Instantaneous access to your house from anywhere on the map and swift travel elsewhere permit you to accomplish a myriad of goals in a day. And with in-game days so concise, why not keep going? Rune Factory’s frantic yet soothing pace tempted me in ways Animal Crossing could not, despite both being very meaty experiences.
When you get around to it, the plot is relatively typical amnesiac fare, with the playable prince or princess following the orders of a dragon that bears just as many mysteries. XSEED’s localisation lays down both subtle and snarky humour without ever seeming tacky though, which plays to the strengths of the game’s overall mood. It turns an otherwise average tale into a truly memorable one. 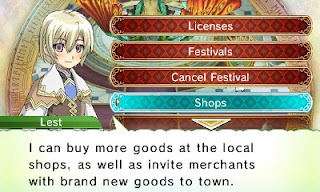 The only real aspect of Rune Factory 4 that isn’t delightfully polished is the item management. This is a game where switching weapons, farm tools, and healing items is a frequent affair, yet the developers have mysteriously opted to underutilize the 3DS hardware and this makes the process rather tedious. The issue sadly escalates a tad as the player’s backpack expands in size.
To be fair, some of the slowdown is due to the item-heavy nature of the game and reliance on player organization, but many aspects are still questionably implemented. For instance, healing items are not instant use and have to be held in a towering mound and put away manually each time. That’s hardly the ideal situation during an intense real-time boss fight. None of the management is game-crippling, but it remains a minor nagging issue throughout the entire game and one that could have been rectified relatively easily through button-mapping or a faster bottom-screen inventory option.
That aside, Rune Factory 4 is one of the deepest yet most accessible experiences on the 3DS to date. Virtually every happening in its vast catalogue of pastimes is appealing and contributes to an overarching sense of reward. Even with other time guzzlers on the 3DS’s horizon, this is not one to miss.