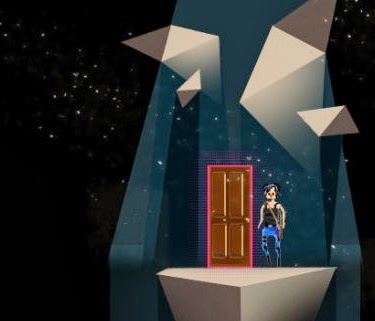 Every so often we come across a Kickstarter that is worth highlighting in some depth. With that in mind, allow us to introduce you to Troubadour. The work of Eric Doty, Zak Alexander and audio producer Dallas Stoeckel of Cicatriz Entertainment has just sneaked through their Kickstarter, so now it’s just a matter of sitting back and waiting for it.

Troubadour is an interactive graphic novel that aims to critically reflect upon our society’s intemperate romance with the technology that surrounds us, referenced as “the digital age.” Particularly, the project aspires to reveal how, in Doty’s words, “technology can cause distractions and unnecessary stress, which upsets the natural flow and calmness in our daily lives.” From its narrative down to its visual style, the game seemingly alludes to the cyberpunk genre while simultaneously inverting it — for in this case, the dystopia is ours of the present.

The player assumes the role of Lu, leading her amidst a computerised world suffused with gadgets and gizmos to prey upon her fascination, while discovering the story throughout her journey. The game primarily controls as a 2D side-scroller, albeit most of the plot is to be explained through interactive scenes. As we descend deeper through the action, we’ll watch as both Lu and her surroundings develop in response to our advances.

Despite having a unique protagonist, much of what Cicatriz intends with Troubadour is to evoke a personal appreciation for its narrative through Lu. As Doty shares with us, she somewhat serves to betoken the experiences of many young adults who live within the digital age, as well as the pressure that arises from this custom. 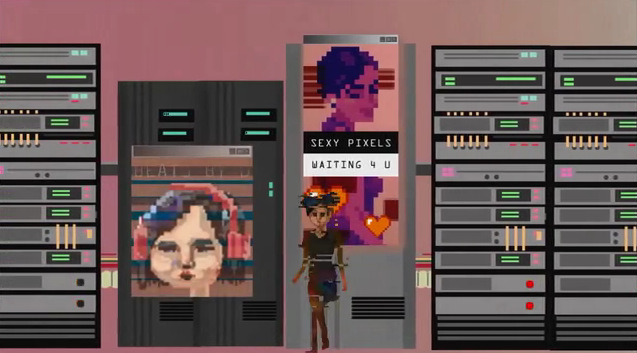 “Lu is the ideal protagonist for Troubadour because she is, as much as I hate to use the term, a millennial. She’s a 20-something who has grown up with the Internet and digital devices. She suffers from the same problems that many individuals do at that age caused by being told they’re the best, while the media and potential employers tell them they aren’t good enough.”

“Add on the stress from having skewed perceptions of isolation and connectedness from using social media and you have a protagonist that I think most of us can easily relate to,” Doty added.

We asked Doty whether he might’ve had any anecdotes of his own to draw from in designing the game’s narrative. As it turns out had. “I’ll try not to spoil anything, but yes there are personal experiences that I’ve pulled from,” Doty said. “My mom will probably hate that I’m saying this, but one of my earliest memories is seeing my parents having a really heated argument in the living room. Hulk Hogan was wrestling on the television, the only real luxury I had during my early childhood, and one of them pushed the television off the stand and broke it.”

“While frightening as a child, today I find humour in the contrast of the fake violence on TV versus a how frightening real anger can be. It was just a TV that was broken, but it was that much more frightening than what was going on on the TV. A more recent memory that strongly stands out is seeing friends fail out of college because they were addicted to World of Warcraft. That game consumed them and it was literally all they would talk about. This was influential in my understanding that everything needs to be taken in moderation. I learned that sitting in front of my computer for 40+ hours a week as a recreational activity wasn’t healthy.” 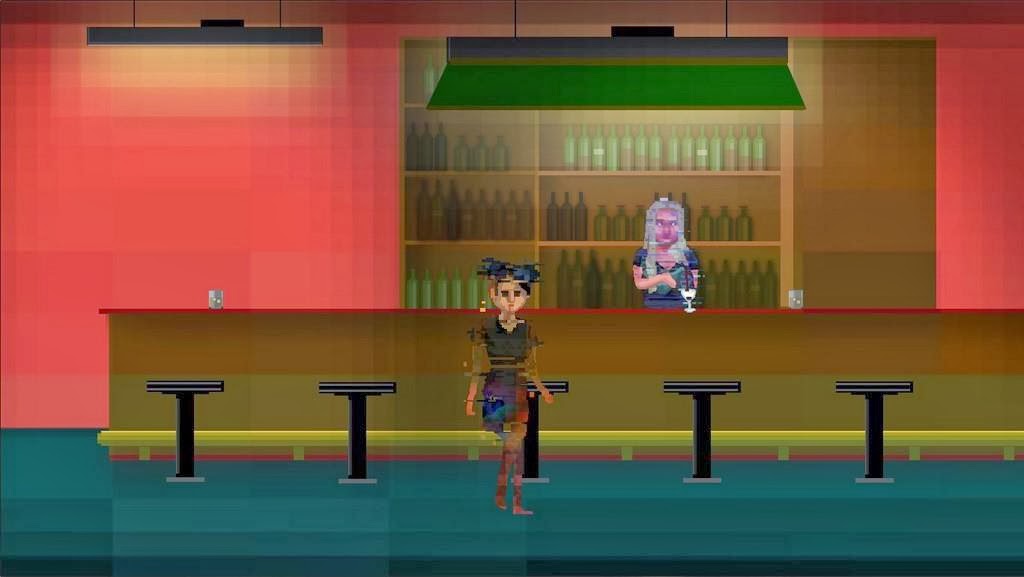 “There are also fictional scenes that I’ve written into Troubadour that I would expect most 20- and 30-somethings to relate with. There are points of Troubadour that are intentionally stressful and confusing to, hopefully, elicit the same feeling from the player that Lu is supposed to be experiencing in that moment. We have the luxury of having two very talented individuals handling visual design and music that can make that a possibility.”

Analysing our relationship with technology through an electronic medium is an interesting concept. In actual fact, it could serve to maintain the audience’s attention on what the game is expressing, rather than how it expresses it. With the game expected to only run to thirty minutes, Doty explained how the team has gone about expressing this conflict.

“On one hand it’s exactly the opposite of what I’m trying to say (“Have you thought about taking a break from this device?”), while on the other this is the perfect medium to immediately capture the sort of interactivity to cause a connection to this character and scenario, and get my meaning across,” Doty said. “Creating a shorter experience not only creates a higher chance that an individual will finish Troubadour, but it also helps us avoid the scenario where we contribute to the problem.”

Recently, there has been much deliberation over what does and does not denote a videogame, particularly those games that are heavy on the narrative. With David Cage’s Beyond: Two Souls first inciting mainstream debate over the medium’s approach to story-telling, people have been quick to dissect similar experiments in genre for the sake of continuing the discussion. 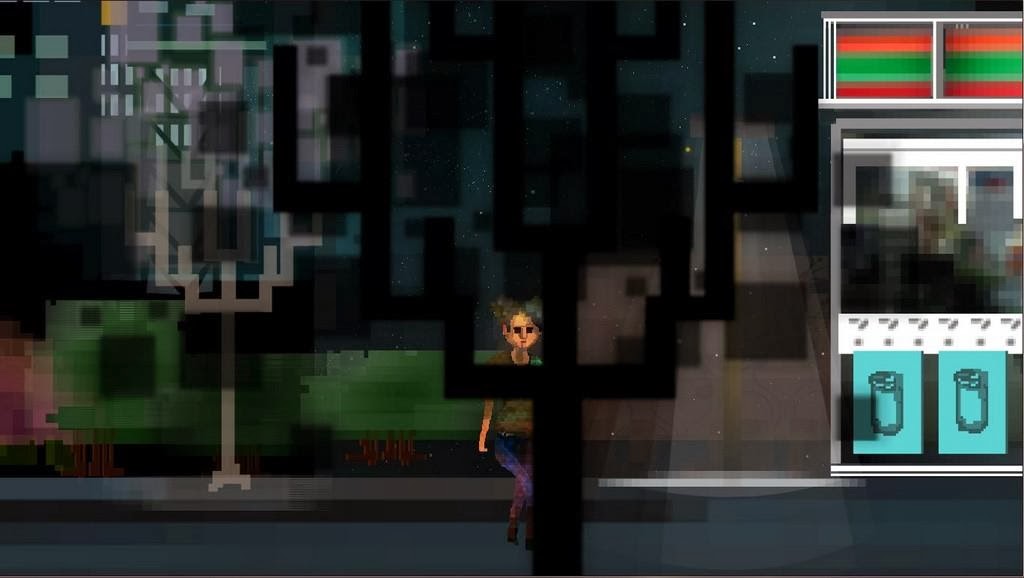 With Troubadour, Doty’s team has opted to avoid such arguments where they can, for fear of preempting people’s appreciation for their core concept. Part of that lies in the project’s summary as an ‘interactive graphic novel’.

“With Proteus and Gone Home coming out in 2013, there were major discussions around what is and isn’t a game. Zak and I want nothing to do with those conversations,” Doty said. “It reminds me of debates over what genre of music a song is in instead of discussing the message that the artist is trying to express, or the craft that was required to create it. Maybe, instead of debating what is and isn’t art, we should reflect on the importance of these pieces.”

“Moreover, I really don’t want to mislead anyone, so there’s some hope that by calling it an interactive graphic novel people will understand that we’re focusing on story and atmosphere over play. This is not software full of puzzles or precise jumping that one would expect from something called a ‘game.’ First and foremost Troubadour is social commentary on how we choose to live our lives in the digital age. We’ll provide the story, expressed through experimental digital toys, and let everyone else decide what it is or isn’t.” Indie development seems to be at its most welcoming to budding creators at this moment in time, thanks to its increased recognition from mainstream channels. The success of arthouse productions such as Journey, Dear Esther and Gone Home has shown that an audience exists for those who wish to see their own small-scale experimentation with video-games published.

So where does Doty see himself amongst his arthouse game development peers? “It’s tough for us to broadly talk about indie development and the indie scene because we’re so new to all this,” he said. “The tools are getting more accessible every year, so there’s never been a better time to jump in. I can say that GameMaker is incredibly useful for me to develop with because the learning curve is relatively small compared to other development packages. For anyone that’s interested in indie development, or starting their first game, I highly suggest reading Anna Anthropy’s Rise of the Videogame Zinesters.”

“We, as a culture, desperately need more diverse voices in this medium and we need to continue to support and share the work done by developers who have been drowned out by the largeness of traditional game culture. ForestAmbassador.com is doing good work to showcase very short experimental games.”