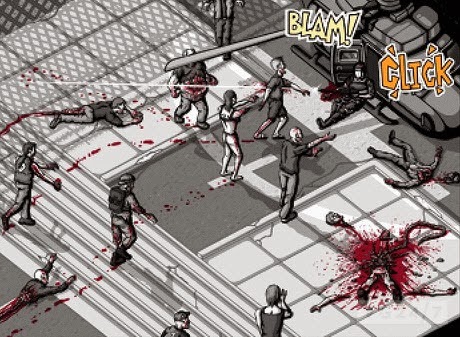 Chain reactions are inherently fun. Anyone who’s ever owned a set of dominos can attest to this. Laughing Jackal’s newest Steam release, OMG Zombies!, aims to mix the fun of chain reactions with a zombie apocalypse. First released as a Playstation Mini a few years ago, this game’s PC port has managed to snatch the dreaded “boring” tag on Steam’s new user tag feature. Lukewarm reception aside, OMG Zombies! isn’t all dull monotony but there’s a lot to be desired compared to other titles.

Putting positives first, the core gameplay of OMG Zombies! is solid. You play as a policeman who is inexplicitly immune to a zombie infection. The zombies virus causes the hosts to explode on death, releasing their spores to other nearby zombies. Across the hundred levels of the game, you’ll be tasked with using a limited number of bullets to kill as many infected as you can. You’ll also encounter a variety of special infected which have their own death mechanics. Each zombie’s death effect can be upgraded using earned money (don’t ask how that works) to increase their damage and area of effect. It’s worth mentioning that the violent imagery might be seen as a problem to some, since it doesn’t add to the gameplay or story at all and thus just feel like violence for violence’s sake. 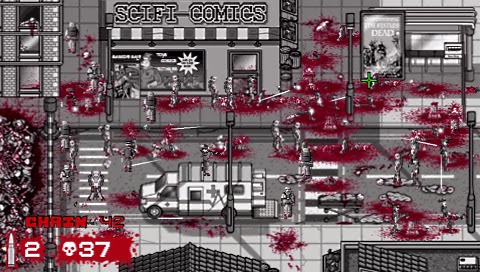 Chain reaction games are fairly luck-based by nature, but OMG Zombies! feels even moreso. Various special infected have abilities which fire additional projectiles in random directions and the crowd of zombies is randomised on each attempt of the level. They all walk in a painfully slow pace so waiting for the perfect cluster to occur is pretty much a non-option. In the earlier levels you’ll be able to cause chain reactions largely by accident, but the harder levels are designed so that your accidental victories are less probable. There are rarely moments where player skill is factored into whether the mission is a success or fail, although generous passing margins alleviate this stress somewhat. It’s easy to see why the Steam community would find OMG Zombies! boring; luck and patience don’t often make for the most engaging games.

The graphics are drawn entirely in grayscale except for red blood. This design scheme is reminiscent of violent and morally ambiguous works like Sin City and Madworld, although OMG Zombies! fails to use the aesthetic to the same thematic effect. Many levels simply look like rough sketches which have been neglected the benefit of colour. The violence in OMG Zombies! is not at all justified and it’s used for neither comedic or dramatic purposes. Death animations are also not smooth, accompanied by visceral sound effects which you’ll want to turn off quickly. The story is conveyed through graphic novel format and the intro is quite engaging. It details the scientific experiments and human error which causes the outbreak and it clearly draws influence from classic sci-fi horror literature. The story segments are then sadly absent until the end of the game, and while there are a variety of endings based on how much of the game you finished, they all feel tacked on and aren’t adequate conclusions.

There’s not a lot else which can be said about OMG Zombies!. It’s a competent chain reaction game backed by lacklustre design and writing. The excessive violence might turn off some and the lack of challenge will turn off others, but for people looking nothing more than cheap fun can do worse than OMG Zombies!.

A Kickstarter to watch: Troubadour