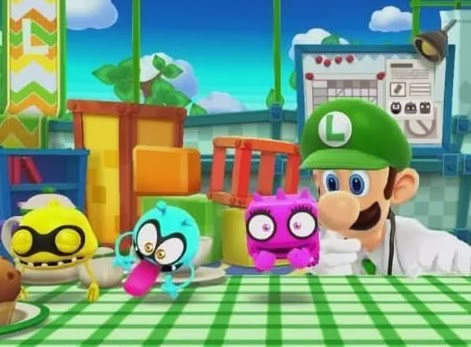 Dr. Luigi is a decent game, but it also represents all the problems that Nintendo is going through with its HD TV console. As with NES Remix before it, Dr. Luigi is the kind of filler material that would be fine… if it was supported by blockbuster stuff.

The 3DS has managed to strike this balance admirably. For each experimental project or small downloadable game like Denpa Men and Dillon’s Rolling Western Nintendo also publishes a constant stream of AAA-grade stuff, like The Legend of Zelda: A Link Between Worlds and Bravely Default: Flying Fairy, and so players get the best of both worlds, and a near-constant stream of truly great products either personally developed or hand-picked by Nintendo.

The Wii U, meanwhile, has a handful of blockbuster games published by Nintendo, such as Pikmin 3 and Super Mario 3D World, but those don’t come come at anywhere near the same frequency, and instead it does feel at times like Nintendo is busy finding these cheap, quick-to-develop games to fill gaps simply to have a release schedule while it figures out where its next blockbuster is coming from. 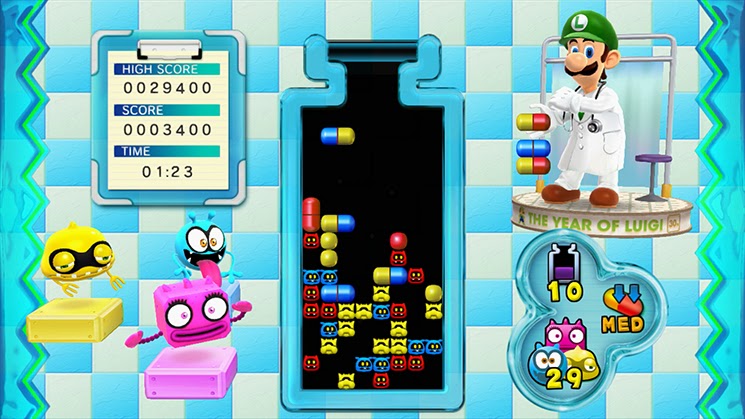 All that said, Dr Luigi is a perfectly fine game. The standard game is a precise clone of Dr. Mario, where players will line up coloured drugs in a match-4 formation to make viruses of the same colour disappear. At the lower difficulty levels there’s only a few viruses to contend with and the pills drop slowly, but ramping the challenge level up will keep the most skilled players on their toes. Should the pill pile reach the top of the screen, it’s game over.

You’ve likely already played some form of that game before. Heck, it’s available for cheap on the 3DS as a Virtual Console Game Boy game. So, in order to justify the Luigi theme and the higher price point, (and the fact that so little has been done to this game since the WiiWare Dr. Mario game) Nintendo has also included a gimmicky “Luigi” version of the puzzler. In this version instead of dropping a single pill, Dr. Luigi will drop two pills simultaneously that are connected and shaped like an ‘L.’ Players will then need to use some Tetris-style skills to manoever these around to remove the viruses as standard. It’s a fun diversion at first, but the mode never quite feels up to the same refined standard as the core game.

There’s online play, which is a nice bonus for serious fans of the puzzle game, and these work well enough, but at no stage was I able to shake the feeling that Dr. Luigi is nothing more than filler material. This isn’t an especially memorable game, doesn’t utilise the capabilities of the Wii U to any meaningful degree, and is nothing more than a brief diversion on the way to something more.

The problem is, no one is quite sure when that something more is going to happen for the Wii U.