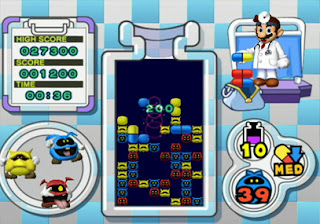 Puzzle games like Dr. Mario have been around for ages, drifting from console to console and finding new fans along the way. However, things rarely change from one installment to the next. Dr. Mario Online Rx tries some new ideas, but inadvertently reminds us why formulas stay the same.

The core gameplay is virtually unchanged from the original. Coloured pills with two halves descend from the sky and need to be matched up with the corresponding coloured viruses to purge them. More specifically, you need to stack three appropriate pills on top of or next to the viruses. You can clear multiple viruses at once for some chain combo action. Once you’ve cleared the area of germs, it’s on to the next level. Each subsequent stage gets filled with more and more germs, so by the time you reach the 20th level your playing field will basically be germs.
Before starting the game, you can pick the level of viruses, the song that plays in the background, and the speed at which pills fall. Other than two more songs and some superior visuals, even the presentation of the menu is the same. What might make this game worth buying for veteran doctors? Why, some lacklustre new modes of course. 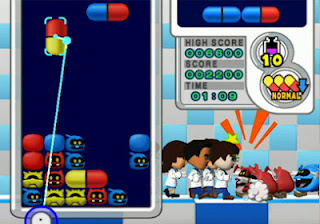 Flash mode plays out almost exactly like classic, but the key difference here is that you only need to dispose of the flashing viruses to claim victory. It adds variety briefly, but you’re probably going to forget this mode exists since it comes off as a dumbed down speed mode.
Another new mode called Germ Buster changes up the traditional gameplay more than Flash, although it’s not terribly successful. The concept of purging the viruses is the same, but now you need to use your Wii remote’s pointer to take control of the action. Additionally, multiple viruses fall down at once, so it can get pretty intense for a single player to endure. It’s far too easy to make a mistake due to the pointer controls, and considering the multiple falling pills, you often can’t salvage these errors. At least this makes it vaguely reminiscent of a high-risk surgery. Thankfully, it can be played with up to four players for some hectic action, as you all share the same screen. It’s basically a war of who can point and click faster, but the co-operative aspect is still reasonably intriguing.
The last major mode is essentially an offline battle mode that allows you to practice against a computer player. The same rules apply, but occasionally some uncontrollable half-pills will rain down upon your playing field and either help or harm you depending on the luck of the dice. This mode is playable locally as well, so Rx may have a place in a household of puzzle game addicts. Granted, you can only play with two players at one time, but it shouldn’t be too much of a pain to swap controllers. 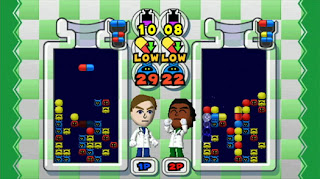 The online mode adds a ton of value to the otherwise standard package. You can challenge your friends and anonymous players to a competitive game with either classic or flash rules. Players have individualized points rankings determined by wins and losses. After the match, you can communicate through several pre-made messages. It’s a pain to meet up with friends due to individualized friend codes exclusively for Online Rx, but that’s a complaint aimed more at the Wii’s online structure than Rx.
The presentation isn’t anything to write home about, not that much more could have been done anyway. Menus are no-frills and efficient menu and the actual gameplay art reflects the simplistic style. The soundtrack, however, boasts some of the most likeable versions of the classic Dr. Mario themes yet. Two new songs and extra remixes are included to round things out.
Dr. Mario Online Rx is a decent, if unspectacular rendition of the same game we’ve played for 20 years. Nearly every attempt at adding new content falls flat and there’s no compelling reason for a seasoned player to grab this beyond the online mode (a Virtual Console release would have sufficed). If you’re into the whole online scene and have always wanted to test yours skills against the world, however, this is the only way to do it.
-Clark A