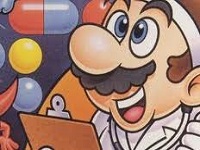 Dr Mario is a little puzzle game that has, unlike Tetris, not really gone anywhere in the years since its original release. The reason? It’s just far too simple, and fails to give people a really compelling reason to come back for more.

The set up is a little like Tetris. There’s a virtual jar, that is filled with the kinds of virus. The goal is to remove those viruses using the pills Dr Mario tosses into the jar. Black pills can remove black viruses, and the same is for the white and grey viruses. Like Tetris, to remove the viruses you’ll need a vertical or horizontal line of four objects (whether pills or viruses). A level is over when all the viruses are removed. It’s game over if the jar becomes filled.

Levels become progressively more difficult, with higher levels having more viruses to remove. The problem is that the game doesn’t offer enough to hold attention for more than a few minutes. Without the mathematics and random shapes of Tetris, there’s very little variety in the way each of the levels play out. It’s also an easier game then Tetris as a consequence, and there isn’t much incentive to keep playing the game, as the score is arbitrary: points are awarded for removing viruses, and there’s a set number of viruses per level. Therefore, the scores you can earn are predetermined before you even start playing. 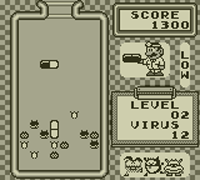 There’s also only 20 levels. That might sound like a lot, and certainly levels 15-20 will test most people, but it’s still a game that’s over in a virtual heartbeat. With the two player game removed on the Virtual Console there’s absolutely nothing else to do in the game.

Gameplay options are thin too. There’s two different music tracks to choose between, though they’re both quite bland. There’s three different speed settings to determine how fast the pills drop, and that acts as the difficulty level adjuster. It’s also possible to select which level the game starts at, so it’s possible to skip the first ten levels, which are cakewalks.

To be fair to Nintendo, this is one of the cheapest Virtual Console games to date, but it’s not really worth even the $Au4.50 it’s asking. It’s brief, and it’s not that engaging while it lasts. Small wonder that it is Tetris, and not this, that is remembered as the retro puzzler of choice.

Microsoft debuts the Arcade NEXT initiative