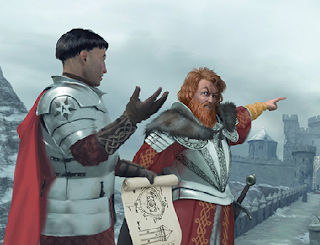 Avadon 2 is a game that we truly love at DDNet. The work of indie mastermind, Jeff Vogel, it’s as traditional as RPGs come, and people who have fond memories of the likes of Baldur’s Gate will love it.

Vogel’s greatest strength has always been in storytelling. His games might look primitive by modern standards, but there’s a reason his games remain ever popular – he tells a ripping yarn and, like a good page turner novel, they’re impossible to put down.

The original Avadon is, of course, already available on the iPad if you’d like to try before you jump into the sequel, and now we know how long you’ve got to get ready for the sequel; it will be available on February 28.

So get those iPads primed and prepare for dozens of hours of turn based hacking and slashing!

The Wii U is winning the ‘console wars’… in my living room, at least